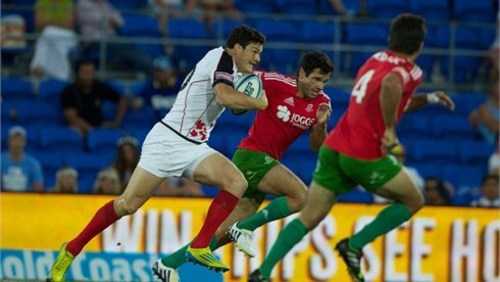 Canada gave another Sevens memorable effort at the 'first-up', Gold Coast Tournament yesterday when they were nipped by France in overtime in the Bowl Final, 14 - 19. Points earned in this opener have the men placed tenth of the sixteen teams on the circuit.  New Zealand defeated the hosts, Australia, in the Cup Final.  To indicate the effort of this squad, Canada defated Scotland, a team that had earlier tied the Aussies in Pool play.

The writer was fortunate enough to catch two games,, the Scotland match (19-14) and 29-5 win over Spain.  I was impressed by the team play, strategies and skill.  Certain individuals did stand out along with the overall improvement of the group, minus players the calibre of Trainor, Ardron, Duke, Mack and Hassler, was pretty impressive.  Hats off, boys.

So, who stood out?  Definitely Moonlight with his tournament total of five tries, Nanyak Dala was a strong forager of ball, the experience of Jones and Hearn was valuable, Braid added strength.  The pace of  Douglas and Hammond was very noticeable.  In all, everyone stood out!  Not to mention Freguson adding a tally and Kay and Parfrey getting experience.

To the squad, dissapointed in missing out on the Cup comp by fewer tries scored in Pool play and losing skipper, Nate, you deserve big time credit.  Of course, you have put even greater expectation on your backs, but one has a sense that the players are enjoying the challenge.  Well done, to the coaching staff and now it's off to Dubai at the end of November.