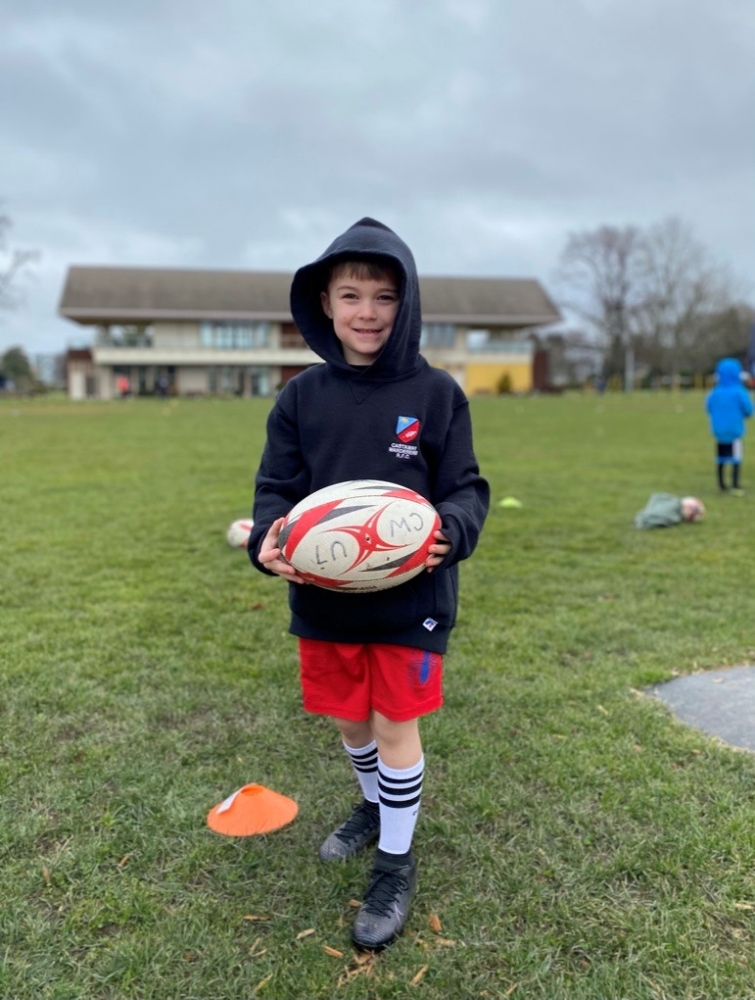 Rugby U7 Rookie, Hudson, shares his joy at starting the game!

Six weeks have passed since our last posting and we continue to slog through Covid times.  However, today, it is a glimmer of bright news that is passed to the many ‘starved’ CW fans.  Having heard pronouncements regarding vaccine availability for our general populace, we add to this glimmer, the fact that CW Minis and Youth rugby have made a start-up under the very stringent Provincial Health Guidelines, further refined by our governing body, the B.C.R.U.  It has come about with the planning and guidance of club coaches, program leads and CW’s Rugby Director.

We went to D-o-R, Scott Manning to get a thumbnail picture.  “CW Rugby is extremely proud to be one of only a few clubs in British Columbia currently offering rugby programming.  This is a testament to a lot of hard work put in behind the scenes to make sure that the club was properly sanctioned to restart under ‘ViaSport Phase 2’, and that most importantly, programming could be delivered in a safe and organized manner.  The CW Mini's program kicked off again at Windsor Park on Sunday, February 21st, while the Jr. Age-Grade programs will begin this weekend.

After stopping by Windsor Park last Sunday I was blown away by how well the detailed plan had come to life and was being so well implemented by the program leaders/coaches.  While it didn't look like our Minis programming normally would, there were smiles all around, and one could feel the energy and excitement from the kids who were obviously thrilled to just get a ball back in their hands.

At a time where youth have very little options when it comes to team sports, the club felt it was very important to offer up whatever we could, even if it had to look very different.  Just having the ability to be outdoors and be ‘safely' surrounded by their peers should have a massive impact on the positive social, emotional and physical well-being of the youth in our communities."

Thanks, Scott.  This says it all and as well, it is a credit to the many parents and assistant coaches who have been able to provide the additional personal direction needed to supervise the numerous drills needed to retain the youngster’s attention, place and collect equipment and oversee distancing procedures.  It is almost seems overwhelming but it is an indication of love of the game.  Well done, ALL and GO, CW!

R.I.P. Chris Pollard.  It is with sadness that we bring news of the passing of former Oak Bay Wanderer, Chris (‘Moose’) Pollard.  Chris graduated from St. Michael’s School and returned to work there after his University graduation.  In later life his career switched to that of Probation Officer.  Chris was the youngest member of a B.C. team that toured Japan in 1959.  We went to CW members, Alun Rees, Jim Wenman and Chris Spicer to recall a memory or two.

“I first met Chris in 1964, when we came together on a Crimson Tide rugby team that won the McKechnie Cup, which had been gathering dust in the Vancouver lockers for twenty eight years.  We later played for B.C., along with several of that same Tide team.  The more memorable of games were against Scotland, Fiji and Tonga.  Chris was also involved in the world of education, and I saw him quite a few times within our SMUS connection.  He was known as "The Gentle Giant".  On the field he was a 'go-to guy', and off it, he was a gentle man who was caring, thoughtful, who also had a shy cheeky sense of humor.”  (Alun Rees).
"The Pollards and the Wenmans were quite close as Ted Pollard, the father of Chris was a great friend and I think a school mate of my Dad, Reg. I grew up watching Chris play for the Wanderers, The Tide, BC and Canada. He was a very big man and a gentle giant. He was one of my heroes so it was nice to work with him for four years at SMUS when he was assistant Head. A very fair even tempered individual he was solid as a rock."  (Jim Wenman).

“I worked with Chris for a spell while at St Michaels University School. He was always a thoughtful, funny, friendly colleague. We were different in age but one fine sunny day, we put together a staff and alumni rugby team to play a "friendly" against the Ebb Tide.  This was a feature of our school alumni weekend of festivities.  I remember feeling safe as houses in our lineouts with twin towers Chris Pollard and Grenfell Featherstone bracketing me in the lineout.  This “friendly” ended up being the site of my friend Mel Reeves last game and his broken leg; my last game and my broken nose (courtesy of ex Wanderer Ron Crawford), and to top it off, a donnybrook broke out and Jim Wenman, seeing brother John in some distress, flew into the fray. This was the last “friendly” played on this annual weekend. Chris Pollard emerged unscathed as nobody was going to mess with him!  R.I.P. – you very good man.”  (Chris Spicer).