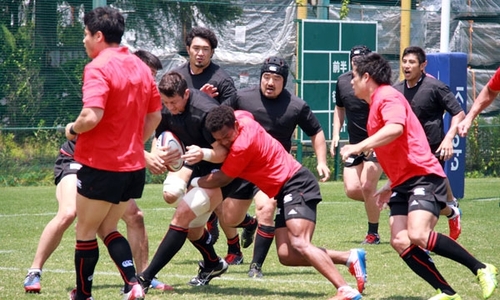 Excitement abounds as we welcome the Cherry Blossoms and their record of seven wins on the trot. Coached by noted Aussie, Eddie Jones and assisted by Leigh Jones, the Japanese side features a much more confident group of players than ever before with players who can call New Zealand, Australia, France, Tonga and Samoa, “home”. Whether or not the side will include the three Super XV players with them is conjecture but probably, unlikely. The fact that this game is in Vancouver, breaks a long drought of absence of International games. The outcome will give Canada a good indication of just where it stands in the “second Tier” of International rankings.  Canadian selection to follow.

A feast of rugby. Saturday is definitely a “Rugby Day” as the Crimson Tide will be playing three matches against Vancouver at Burnaby Lake Fields as well. The Women’s Hellerud-Brown Cup game kicks off at 11:30 a.m., Men’s U20, Dunbar Cup, at 12:50 and Men’s Mc Kechnie Cup at 2:00 p.m. Following the game, buses have been arranged to take spectators to Swangard Stadium for the 6:00 p.m. kickoff, Canada vs. Japan.

Our National Senior Women’s team has arrived and settled in Papamoa, a small town of 20,000 in the Bay of Plenty, N.Z. They take on Australia on Friday, June 6th (Thursday PT). Our best wishes go out to the women as they seek to fine tune for the upcoming RWC. Go, you good things!

Belated boys B.C.H.S. scores. Last Saturday, perennial AAA Champs Shawnigan LS were knocked off by arch rivals, St. George’s, coming from behind to win 15 – 12. SLS had won four on the trot and seemed to “own” the crown. Other results, saw Lord Bing easily handle Oak Bay Barbs. The Barbs were ranked third, going in but finished in fourth place. (We have not heard any “skinny” on this one yet.) SMUS also finished fourth in AA action, won by Rockridge from North Vancouver, over Collingwood. There is some scuttlebutt afoot about the huge disparity amongst schools as the powers that be, seek ways to enhance and grow the game. Could well be “more news forthcoming”?

Pucker vs Burnaby, circa 2008.      In “passing” – Pucker captained the Ontario Blues in last weekend’s sixty minute, Karl Fixx designed, Super 7’s match between Ontario and a New York Rep combination, The Rhinos. Basically, it is “ongoing sevens” with revolving subs, the final score in this one, Ontario 79 – 43!! Sounds too much like basketball for this fan.

Kenny vs Alma Mater.....the Pacific Pride.  Also seen in passing………..Dave Clarke, in the hood. Mentor and originator of the Pacific Pride program and subsequent, NSMT’s Coach for three seasons, Clarkey left a wonderful legacy for Canadian Rugby despite the demise of the Pride program. A warm CW “cheerio” to Bev (“Den Mother") and Dave.

Braydon on the fly in V.I. Final.  We'll get a pic of the "quartet" soon - apologies to the missing trio! A quartet of CW Juniors are off on Monday to Germany, and the Heidelberg Sevens. They are members of a BC Elite Youth Sevens team, coached by Shane Thompson.   Our lads are; Brendan Schellenberger, Braydon Tate, Brennig Prevost and Jonah Hall. This could be the start of a long process towards eventual Canadian selection. One reads of how N.Z.’s, Richie McCaw made a goal chart as a young man to plot his path towards eventual hoisting of a RWC. Who knows what path this trip may lead to for these lads? Already, one member of the squad, Will Saunders from St George’s School has played for the “seniors” Canadian Maple Leafs! We wish all team members the best of luck and go, you CW types!