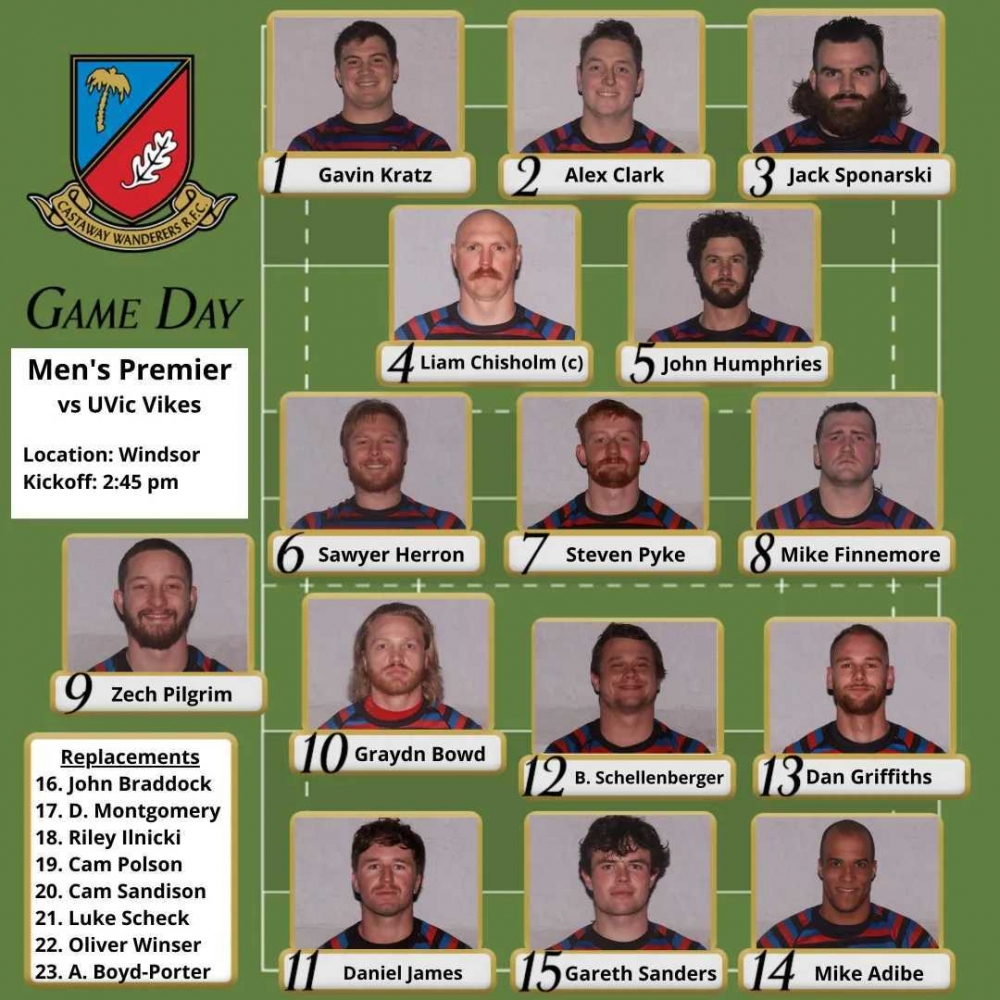 Tomorrow will be a classic matchup with what appears to be the two best Premier teams on the Island, with the Hosts, so far, putting down some serious challenges to what is the best on the Mainland.  The Gerwing Shield is also at stake. It was first played for in September, 2019.  On that date, as holders of the Barnard Cup, CW started with the Shield only to lose it on the first challenge, fittingly enough, to tomorrow's challenger, UVic, by a score of 21 - 43. CW will be starting four men who played in that game, Captain Chisholm, Finnemore, Herron and Schellenberger.  Tomorrow's main game will be preceeded by the 1st Div. match between CW Divvies and the Norsemen at 12:45 p.m. and the CW 3rd Div. against the UVic Saxons at 11:15 a.m.  Both the Divvies and Prems are undefeated to date.  There will be a major display of Mini Rugby between the two matches.  In all, a feast of rugby at the House of Windsor.

The CW Premier lineup will see a number of changes.  The forward pack will be the same as last week, with one exception, that being, Alex Clarke coming into the rake spot for John Braddock.  Braddock will join Cam Sandison on the pines to form a power substitution when called upon.  Most interestingly, Cam Polson is also on the bench, a player unknown to many of this year's crop but a real power house.  It is in the backs where coaches seem to be seeking the best combination. Gradyn Bowd returns to the #10 slot and links with Pilgrim at halfback, a combination that has been rather slick so far this season.  'The Director' Schellenberger returns to the centers with Griffiths and a couple of interesting selections have been announced with the 'Back 3' where Dan James gets a speedy promotion to 'The Bigs' and Gareth Sandner takes over from Elliott at #15.  Sandner's display last week with the Divvies was simply scintillating and this pundit predicts he will not disappoint.  Missing is White, who we thought played well enough to justify his spot, Tait, and Boyd-Porter.  The Divvies are loaded for Bear and will give the "Mighty Horsemen" all they can handle.
The Vikes bring a quality side although it is apparent that Rugby Canada has reclaimed their Sevens players and both Prevost and Kratz are missing from the lineup. CW is familiar with a number of starters, Benny Newhook had a season or two, and Henry Down and Nick Carson played both Mini and Age Grade with the club.  Jonas Robinson is as died in the wool Tricolour as he is Vike and Ethan Hager also flashed around the House for two seasons.  In the Vikes last outing, they pushed the fancied Ravens to a two point differential, proving they are no chopped liver and cannot be taken lightly.  With splendid weather predicted the affairs at The Park should be extremely entertaining.