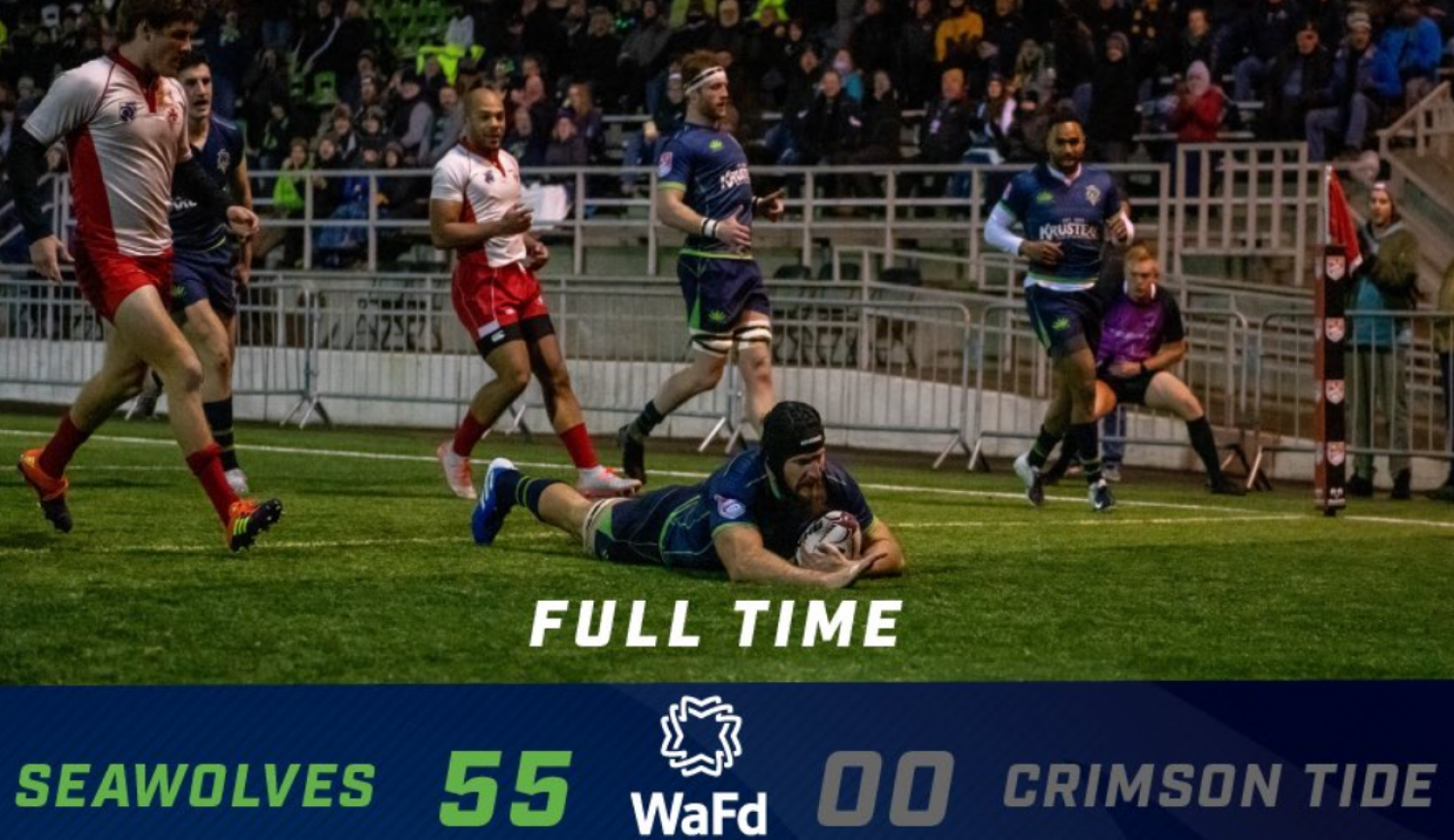 This writer has synthesized the twitter feed of last night’s game from the SeaWolves for the following report. The game was not shown however the scoring parade was denoted accurately and often! Seattle scored early and followed up soon after from a rolling maul from the lineout and quick recycle, 12 – 0. Next it was a bobbled Garryowen that enabled the score. The Tide seemed to incur an abundance of penalties and it was from one such that put the Wolves on attack with quick ball going wide from a lineout, 22 - 0. The Tide seemed to settle a little and strung some phases together, earning a penalty and winning an attacking lineout, only to knock-on! Seattle forced play downfield and the Tide succumbed to a scrum penalty try, 29 – 0. VIRU’s next transgression was deemed a deliberate knock down and from a quick tap and drive, the half ended at 36 – 0.

Despite a better start from the Visitors, unforced errors soon crept in and Seattle linked nicely to open the scoring, 43 – 0. Seattle decimated an Island scrum and executed a deft grubber and 48 – 0 lead. The Tide showed some progress only to relinquish the gains with penalties, admittedly, the Hosts incurred some as well. Despite one-way traffic, the Tide was able to keep the Wolves to one final tally over the last fifteen minutes, ending in a 55 - 0 loss. It will be interesting to get the skinny from the guys who played in this one.

FOOTNOTE – No rugby in Victoria this weekend, except for the Vikes who will be hoisting their National Championship banner at UVic on Saturday night at half time of the basketball Vs UBC (somewhat appropriate!) Well done, from CW!

CW’s Women in the News
It was brought to our attention via an article in BCRN, the fact that UVic and CW’s, Gabby Senft has been signed to play professional rugby in Brisbane, Australia. Neil Davidson’s (CP) article can be read HERE.
Gabby will play with the Reds, one of five professional teams in Australia.  We wish her well.  Interesting to read that one country can pay players to play whereas in Canada, the women’s game struggles for some measure of equitable gender funding.  How do they do that?

Next is the news that CW’s Mandy Marchuk was in London yesterday for the draw for the upcoming Women’s Rugby League World Cup. We at CW, lay claim to the fact that it was Mandy’s presence that resulted in a favourable Pool draw for Canada, ‘onya, girl! Mandy played in the last RLWC when the fledgling Canadian side, managed one win and two losses, losing in the semis to eventual Champs, Australia. Mandy will be appearing in her seventh World Cup in both codes. In October, Canada will play in a Pool with #2 seed, England, France and Cook Islands. It may currently be a foreign, fledging sport to Canada however between the RLWC and the Men’s Toronto Wolfpack pulling in good crowds in the English Super League and the newly minted edition of Sonny Bill’s arrival there, the “Mongo game” is on the move.