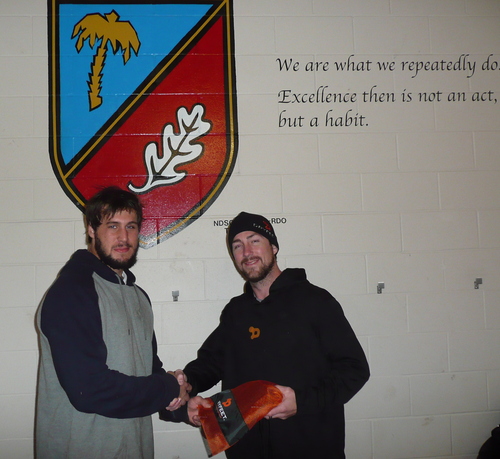 The CW Executive is pleased to announce the pre-season and "opening days" award winner, John Braddock.  John is the happy recipient of his new pair of Dryfeet.  The coaches had been asked to select a player who was the "Pick Of The Pack", based on bringing a good level of fitness to the new season and to have continued to have worked hard at it. A player who has exhibited leadership both on and off the field and who has turned in good game performances.  In essence, a player who has epitomized those characteristics that the coaches can point to as wanting all players to exhibit.  Braddock's the boy!

John is and always has been, a FRF member!  He relishes his prop position and is a "mere youngster" at 22.  He comes from the hotbed of Wellington (N.Z.) rugby (not Scotland. as some miss-informed pundits have proclaimed), where he played for Wellington Marist Club, Wellington Selects U20 and he has also had a season in Hong Kong...one of the many rugby troubadours that pass CW's way, with more than our fair share from Kiwiland. John works alongside Pat Riordan (Master Arborist), so no doubt, he is getting the osmosis of his front row opponents from Captain Canada. John has come to Canada  with his partner who has returned from Hong Kong to continue studies, so it looks like CW will possibly have John's talents for more than a single season.  John's words about the rugby; "I am enjoying the coaching, the rugby and team mates but particularly enjoy the club atmosphere where everyone is included, there is life off the pitch for all to enjoy". 'onya, John!