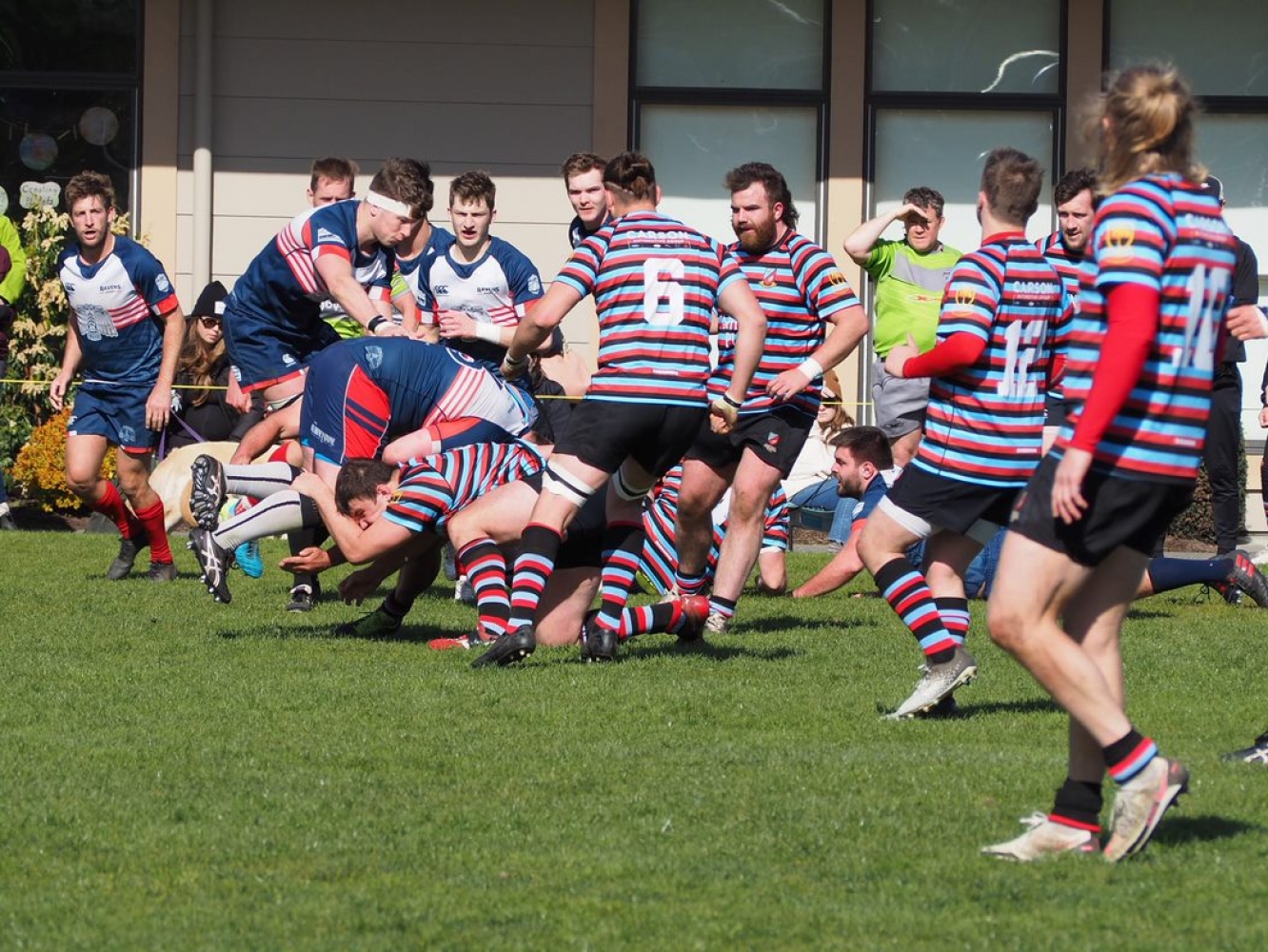 Last outing, the Ravens experienced the agony of defeat on the last play of the game, losing, 32 – 33 to UBC.  On Saturday, they inflicted the same emotion on CW, when on the last play of the game, they accepted a ‘gift’ intercept pass for a 30m scamper under the posts and a 38 – 31 win.  In this pundit’s opinion, the better team, marginally on the day, won the contest.  Going in, there was controversy regarding bonus points, placing Ravens either one point ahead of CW or three points behind, pending an appeal.  No matter what, the win was critical to both teams.  It has been an interesting “season”.  This observer would rank UBC, Ravens and CW as top three with a renewed Caps and Burnaby as teams that could upset any of the former three.

Today’s game was one of “two halves”.  The hosts looking very strong in going out to a 24 – 5 lead, earned from scrum dominance, possession, retention, field position and precision of execution.  Tries came from Adibe, Sandison, Griffiths, and Tait.  In the final minutes of the half, Griffiths received what was deemed by many as a debatable yellow card and questionable dismissal but unquestionable TSN Turning Point in the fray.  Aaron McLelland was to score a try and assist on two others in the ten-minute sin bin duration.  The interval saw a 24 – 5 differential, but far more importantly, a crafty scrum reconfiguration of the FR Fraternity by the Visitors.

James Carson being somewhat “schooled” by his former teammate for many years, Kratz, was switched to lock and the tight head spot reconfigured.  CW’s previous scrum dominance was visibly nullified, resulting in some penalties, and only those with knowledge of the nefarious deep arts of FRF play could comment on the justice of those decisions!  Thence came a dusting of McLelland magic with his own personal tally and assists on a pair of others, finished by fast-flying outside backs, Hase, in particular, to get the affair to 17 – 24.  Ravens were denied an equaliser. A key scrum ball for the birds and eventually more McLelland antics, concluding with his brace, evened the scores.  A jolting tackle by James, saw the ball in CW’s hands, two quick passes and Humphries showed clean heels, to cross out wide.  Bowd converted and the band waggon keeled.

With a quarter remaining, CW brought in Braddock, Herron and Fuailefau.  Yet another penalty against CW, saw an alert #9, Ball, push the cause, however it was from another quality scrum and a Raven “sub” was over, under the posts, and the score was tied again.  CW came back with a spell of a dozen or so retentions, their best work of the half, yet the staunch defense kept the gain to about thirty metres.  A resultant penalty saw all of that in vain which must have been deflating.  The ball once again came to CW hands after a turnover from some good work by Herron. “Pick and goes” looked solid down the blind side and for those in the know, with one or two more retentions, and “no side” the tie probably would have seen the boys in second place.  It was not to be. For some unknown reason, the attack was switched open with a wide pass directly into the welcoming arms of Raven’s Gibson, (I believe), who scooted in untouched, for the 38 – 31 victory.

It was an emotional match for the lookers-on, whose partisan, verbal support for the Home side was on occasion, testy.  Opinions were many and varied on an immediate post-mortem about infractions and decisions, but the bottom line was that a twenty-point lead was squandered, a lead which looked so good and was so hard earned.  Squandered with CW error and pressure from the opposition.

In summary, there were many who performed well, from both teams but the mark Aaron McLelland left at Windsor was memorable.  For CW, I must highlight Sandison’s day.  After visibly twisting an ankle early, he toiled tirelessly and was a constant threat with ball in hand.  And so, cometh the Playoffs on 23rd April.  It looks like UVic returns to The House and the Ravens will host Rowers.  Congratulations to the Old Boys on their good day of results and plenty to gain experience from, for CW.

Other results at The House were also not favourable!  The Islanders opened the day with a 5 - 60 loss to a polished Kats combination. Credit to the Isles battling to the end with no quit and a mustering of 22 players was impressive.  There is still more rugby for the boys, playoff bound.  Moment-of-the Match was a classic, try-saving tackle from past Pres, The Don.  Great example old fella.  The Divvies, behind the #8 ball to begin, were even further hampered with the early departure of Gerhardt.  Regardless, they soldiered on, trailing only 14 -7 at the interval.  A few other injuries saw more starters depart and the Rippers put down the pedal in the late going, after CW had closed to 21 – 17 on an exciting Makaroff try after the ball had been pinched by Sudsy.  Final score, 33 – 17.  Special mention goes to Cam Haywood for a fine game in the tight and the loose. Most unluckily, Cam fractured his arm in the late stages. Set scrummaging was a visible CW advantage for a good portion of the game. This was a much-improved outing by the Home boys, displaying some real character and perseverance. Thanks to all officials on the day.  Elsewhere, CW’s Women’s Divvies dropped a 44 - 5 decision to Simon Fraser.

Thanks to the generosity of patrons in attendance for a collection of $2100 for Ukrainian relief.

He flies through the air with the greatest of ease!
(All the way from Windsor Park to Singapore.)