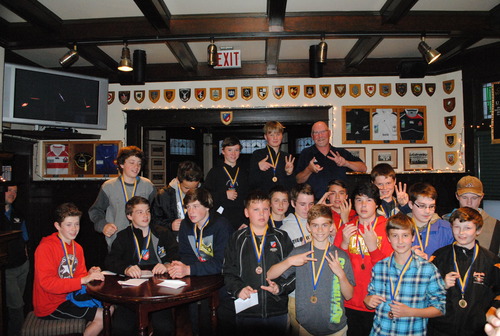 Not to be outdone by the BC Champs, U16 counterparts, the U14's gathered midweek at The Temple to raise their own, VIRU Island Champs banner. It was a first for many of the parents and most players (except those who had been at Christmas parties!!) to be at The Temple and the boys were told the sagas of "our" jerseys and the Board Of Honor.  Youth pundits claimed this team would have been B.C. Champs, based on "interlocking" games, had there been a title.  CW congratulates the U14's.  Also, we would like to thank Mark Bryant (BCRN) and John James ( Heritage House Trophies), for providing a commemorating plaque for the clubhouse and "keeper" medallions for the players.  The boys will "own" the Wayne Peace Trophy for the coming year. Thank you to all of the parents, managers and coaches under the leadership of Shane Muldrew. 'onyouse, guys!