Canada Performs To The Max 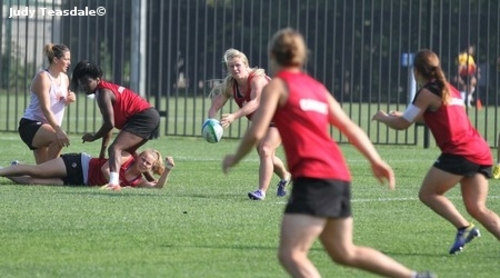 This news is not straight off the pitch as we had hoped to bring it to readers but we have been off the airwaves today, so it may be stale but let's revel in the successes of Canada's Men's & Women's teams at the RWC in Moscow.  What a way for the rugby fans of Canada to celebrate Canada Day.  You read it here first, that Canadian Women could be expected to have a breakout result, finishing top four.........how was second place, Runners Up to the Kiwis??  Ladies, you are fantastic.......second best Women's Rugby Sevens team in the world.

The Women opened their campaign with a 17 - 7 win over The Netherlands, followed by a 43 - 0 shellacking of Tunisia. They then faced the Kiwis who had the upper hand in a 20 - 5 win.  Day #2 saw the gals lay the wood on the host side, Russia, 15 - 12, a side that had previously beaten contenders, England. They followed that up with a 10 - 0 victory over Spain, putting them into the Championship Final.  The Silver Ferns came away with a 29 - 12 win over the Canucks but certainly knew they were in a game.  To the players, coaches and support staff, CW take our hats off to you on this HUGE achievement.