A Banner Night At DSC 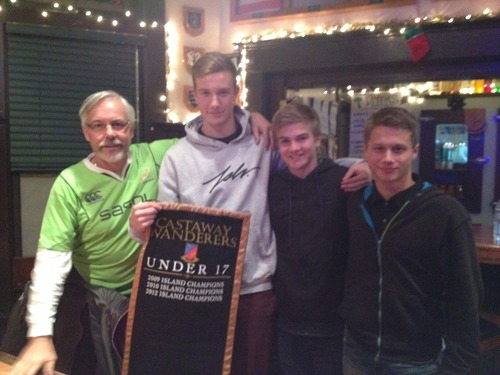 We are at our strongest, based on Spence's "Pyramid Theory".  Co-captains, Jonah Hall, Brayden Tate and Brandon Schellenberger hold the banner.

CW's B.C. Championship U16 team assembled at The Temple on Wednesday to celebrate their season and hoist their Championship Banner.  The players had their parents along with them, as Coach Spence regaled their feats, validating each of the thirty five players and awarding an appropriate item of rugby memorabilia from a wide assortment of sources, with his own humorous style!  (one had to be there) This is a TEAM in every sense but we have to single out Junior MVP for 2012, co-captain, Brandon S. for his selection as the Hard Hat winner for the season, 'onya, Brandon!  The evening concluded with a Doug Tate production of eclectic action footage. CW congratulates all of the players and their coaches and thanks parents for their support on this wonderful season.  'onya, guys!!