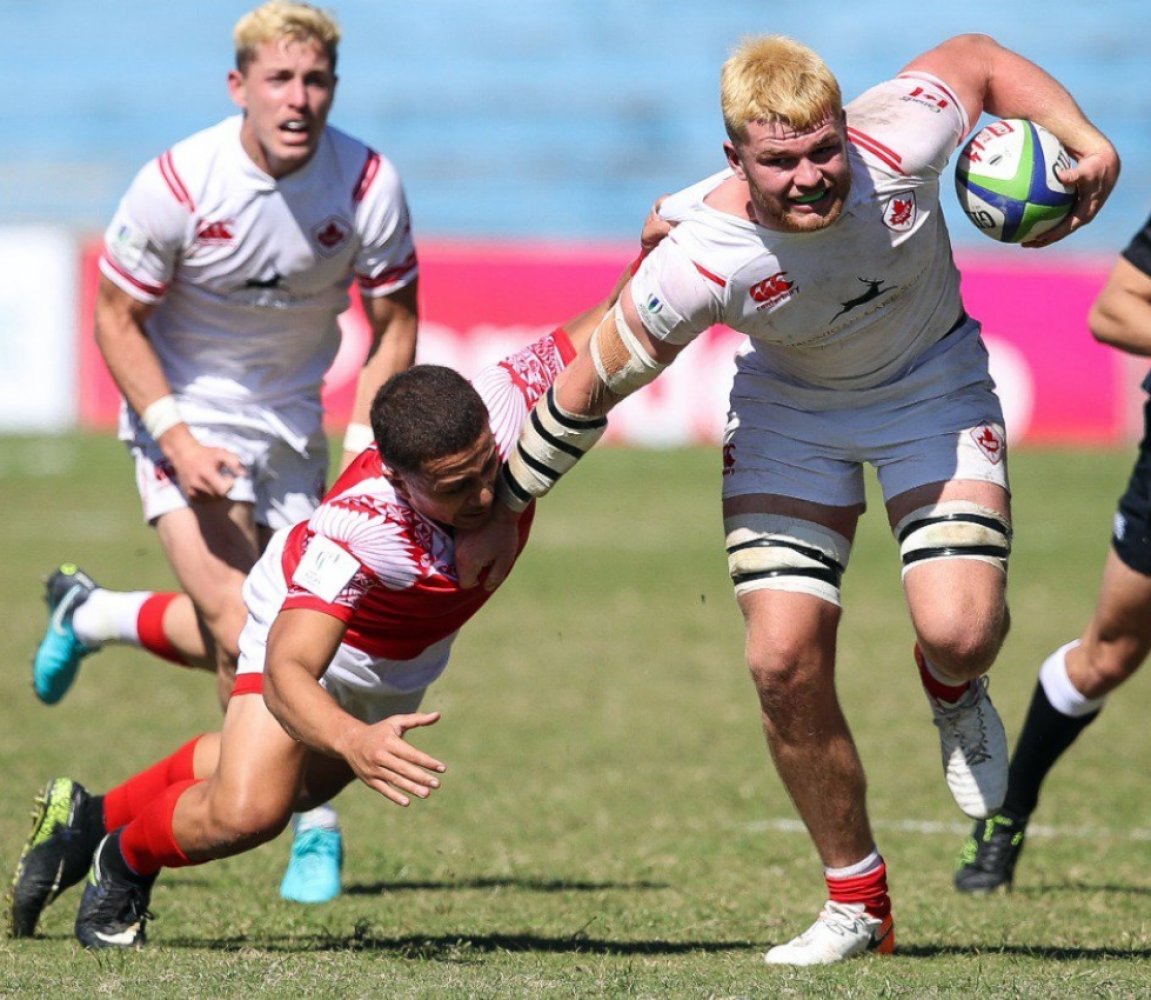 Vikes and CW Grad, Nick Carson on the rampage Vs Tonga

Canada’s U20 Men’s team succumbed by a score of 26 – 25 in their opener yesterday against Tonga at the Tier II World Trophy Competition. Canada are on a mission to earn promotion to the Tier One level of World Competition. CW has a vested interest in the matches with Canada fielding five “grads” from age grade programs. Yesterday, Nick Carson (one of four Carson Cousins on the team) and Jarvis Dashkewytch in starting roles and Jack Carson and Lockie Kratz on the bench, all dressed in the Canada jersey. Nick was dominant and scored a try and Lockie, a late comer to the squad following selection from injury recuperation, had plenty of minutes. David Carson is the fourth player and was not dressed yesterday. Canada’s errant kicking from hand in the early stages (something noticed in the first U.SA. game), allowed the Tongans good turnover ball which they capitalised on and went out to an early 21 – 3 lead. Canada responded with Nick’s try prior to the half and trailed 10 – 21. The Tongans scored first after the interval and Canada finished with a flourish in a desperate attempt to rein in the gap. Despite the loss, Canada’s four try outburst and close finish earned two competition points. The tourney favourite, Japan who had been relegated from last year will be seeking to regain entry to replace this year’s elimination from the top Tier, Scotland. Japan opened by smashing Brazil, 56 – 24. Next up, Canada face Portugal, 59 – 27 winners over Hong Kong, on Saturday at 1:00 p.m. The game can be viewed HERE.

CW applauds all members of the men’s NSMT 7’s (including those on the injury list), their current coach and past coach, on achieving the right for inclusion in the next Olympics.  It has been a harrowing wait for many of the group after barely missing out on the Rio Olympics, to stick around in an effort to achieve personal goals of performing in Tokyo in 2020.  This achievement was concluded last weekend when the boys, with only three tries against them in five matches powered their way to the RAN 7’s Qualifying Championship.  This time next year interest level across the Nation will be at a fever pitch with both men’s and women’s teams running on to the pitch. To the “CW Guys” – MIKE FUALEFAU, PAT KAY, ISAAC KAY & JOSIAH MORRA, you bloody beauties!

Further, on the International Front….

CW’s trio of Sophie De Goede, Gabby Senft and Olivia DeMerchant lost a squealer to the English ladies last Saturday at Chula Vista in the Super Series, 17 – 19. The ladies line up for their final match this afternoon at 5:15 p.m. This game can be viewed here; FloRugby. The Tricolors wish the team all the best and believe the bacon will be brought home to even their record at 2 – 2 in the competition.  Go, you good things!