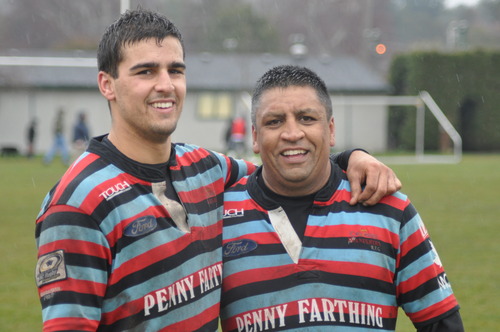 Noticed recently, after a Mighty Thurds contest, the above father/son duo – Kyle and Greg Armstrong. It piqued our interest about this young man from Ontario, Kyle Armstrong. We nabbed Kyle for a brief interview. Kyle started playing back in Grade 9. He moved to Victoria as one of the early “carded” players, one spotted by Rugby Canada as having potential. Kyle had played in the U.K. at Truro College, playing on a team which won the Daily Mail Cup, a prestigious college knockout tournament before the Victoria move and had also travelled to Japan with Canada’s U20’s to play in the JrRWC.

He had hopes for the start of a Rep career when he was selected to the squad to play the U.S. in 2012 but ended up riding the pines. That Fall he was selected to start against Uruguay and gave a good account of himself, so much so, that he was called off the bench Vs. Argentina, giving a quarter of a game that in some opinions, did not mar his reputation either. Strangely enough, he has since gone off the map, a severe knee injury, keeping him out of action for a prolonged period did not help matters. His recent form has been very good, causing some to remark that he has reverted to the form of the ARC’s. Kyle claims he is “having fun again”, a good thing for him and a good thing for CW.

Greg is also a scrum half and has played some fly half. His claim to fame “is my son. I am very proud of him and love him immensely!” Greg’s home club was the Ajax Wanderers in To., a storied RFC. With RSA being the country of Greg’s birth, we have an inkling that he was no slouch in his active playing days. He has been working with Ontario Reps program for the past three seasons, coaching the half backs, giving back. ‘onya, Greg.

Father, Jody keeps a watchful eye on son, Max. Older brother, Jeff has already "graduated" from CW and was on the field with the Vikes last weekend against his old club.

Group of Ten avec les chapeaux. Prior to RWC (N.Z.) in 2011, players who were active with the club at that point in time or who had played with CW - Buydens, Sinclair, Smith, Fairhurst, Monro, Scholtz, Franklin, Hearn, Dala, O'Toole and Walsh. Go, Ceedub!