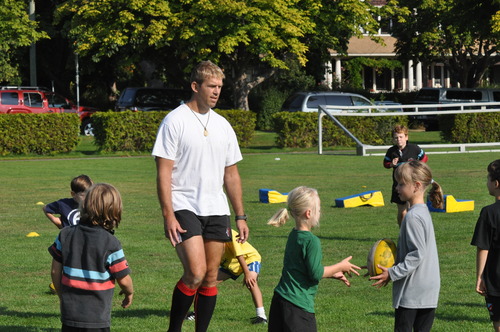 It is appropriate at this time of year when giving is so important, that we end our final interview for this year in the series of "Heros", by introducing our two U8 Mini Rugby Coaches - Ed Knaggs and Tom Browne. We'll kick it off with Ed.

CW: How long have you been associated with CW or OBW (before amalgamation)? "I've been playing rugby for over twenty five years.  I came to CW from Nova Scotia in 1998 during a time when the club was rebuilding.  The highlight of that first season was beating the CCSD (Pacific Pride aka Young Canada) and taking a "perfect season" from them! We lost in the playoffs that year to Capilano and it left a scar that I swore to mend! Tom Browne joined the coaching staff in 1999 and along with Chris May, who came along in 2000, they led us to three Provincial Premier titles.  'onya, Knaggsy!

So, what is your rugby background, Ed?  "I started out in high school in Nova Scotia.  I fell in love with the game immediately - it was the only sport that did not "cut" me!  I played for Cole Harbour R.C. and Nova Scotia Provincial Reps.  I left everything to come to B.C. to take a shot at the National team. CW welcomed me and helped me through this transition.  Here we are, twenty caps, three championships and a huge group of friends later...."

Why do you like the game, Ed?  "It was a game where I was instantly accepted."  So, how long has your "current" association been with CW Minis and why did you choose this area to "give back"?  "This is my sixth season coaching U8's. I remember helping Doug Tate out whilst I was still playing.  Doug moved "up" with a group of kids and the program was at risk and I stepped up!  Rugby has done a lot for me in my lifetime and giving back is the least I can do."

Ed. Note: A website reader reminds us that Ed was amongst a small cadre of Canadian players who earned a modest living, playing professionally in the U.K., over a decade ago!

Tom Browne is a quiet, unassuming man.  He renewed his "active" rugby friendship with Ed four years ago when he started coming to The Park on Sunday mornings and helping with the U8's.  It has only been a rare Sunday that Tom has been unable to attend during those years.

Tom's rugby background is stellar, starting waaaay back at the University of Galway. He came to Canada as a young man and played for Cowichan when he taught at Brentwood and then Castaways when he moved to Victoria.  He captained Castaways, Crimson Tide and B.C., playing on the B.C. side which defeated the British Lions in 1966, 8 - 3.  He was also selected for Canada.

Tom then parlayed that pedigree in his post-playing era to coaching, an arena where he fostered strong bonds with his players, a bond that Tom and Ed will have forever. He has become an expert youth coach who now guides the young tykes in their introduction to rugby.  In the words of Tom, Sunday is akin to "being at chapel".

These two men represent the Spirit of Rugby in every way and we are very grateful for their giving back.