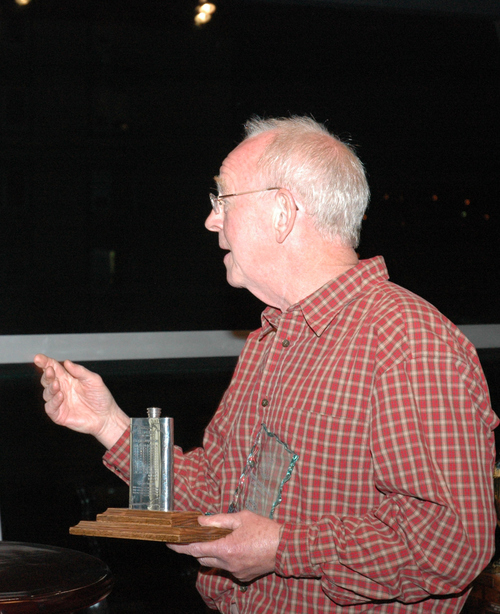 Some 25+ years ago, the Vancouver Island Refs Society insisted (via way of a club fine), that clubs rope their fields - an innovation at the time.  This reminisce brings us to John Morley!  John started his rugby as a "late starter", around twenty, in the U.K.  He was a spare for his soccer team and he looked at a game of rugby on an adjacent field, noticed there were more players and thus, a greater chance of playing.  At that time he switched codes!

He joined East Grimstead club and played "lower Grades"  and in 1963 he came to Canada where he completed a Master's Degree in Civil Engineering (with a major in Hydrology), at Queens Uni.  John moved west and played with Vancouver Rowing Club in 1965 and finally, joined OBW when he moved to the Island in 1968.  He played mostly First Grade for the Wanderers for the next eight years, as a flanker.  His playing career faded into the sunset with the 2NDS and 3RDS and the Ebb Tide over the next "some years". John's favorite memories of his playing days are; "Travelling to N.Z. and back to the U.K. with The Wanderers when I got to play all of the games as Bob Iverson was injured!"

CW: "John, how come you are the Master of Field Prep on game days?"  JM: "Well, years back, Johno asked me to put out the flags.  That became roping the field, padding the goalposts, hanging banners - a job I continue to hate!" (stated with a wry grin).  Hate it or not, John has demonstrated the same dedication with this "job" that he showed as a player, rain, hail or shine.

CW: "So John, why do you continue to volunteer?"  JM:  "Over the years I hae taken a lot from the club and have many friends as a result.  I enjoy meeting the young guys as I envied my peers whose sons played rugby."  John is a regular at Happy Hour on Fridays at The Temple.  Next time you see John at the clubhouse or at the paddock - give him the 'thumbs up'.  It is volunteers like John who keep Ceedub on the map! 'onya, Morley!