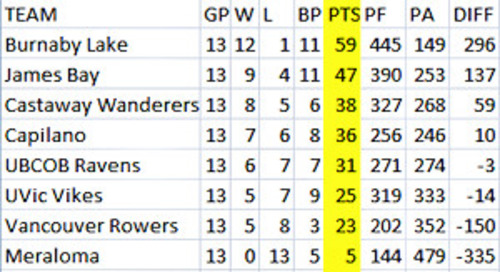 “Hard earned” was predicted and hard earned it was! For much of the day CW was out of synch and a determined Loma provided testy opposition. It looked like it might be easy when Mike Fuli almost “waltzed in” on the first attack but he stepped out of bounds. A seeming, almost complacency and a stiffened Meraloma defence then settled play down. Some fancy stuff by CW failed to come off as the handling became greasy with the weather. Morris and Dingwall both made ground which came to naught with dropped balls. CW was camped in Meraloma territory for the first fifteen minutes but did not open the account. The scrums with Lomas retreating at a rate of knots, were salvaged by a Todd Clever look alike, Lomas’ #8, Clarke, retrieving ball from all kinds of messes and making hay. And so it came to pass that the Visitors opened the scoring after a hands in the ruck infraction. (Apologies to the scorer – Mike Hall??). There was some indiscipline by the Hosts that needs to be attended to with upcoming tense tussles.

CW responded five minutes later when Dingwall (prominent all day), got away, slipped it inside to Monro to Barkwill and thence three recycles, quick hands to Monro and Fuli over, untouched. This was all so dynamic, stuff the fans had been treated to over the past three weeks. A period of sloppy play ensued until a huge “tower” Phelan, blocked a clearing kick to re-focus the attack but again, credit to Lomas and some poor handling, nothing came from what should have been definite points. Shortly after quick hands got the ball to Buckley who was all class in setting up Horton and a 10 – 3 lead. This stood up at the half. Lomas had two troopers who were very visible in the first forty, a #7, Seamus Gay lookalike and #8, Clarke, defending against all odds.

Right after the kickoff CW worked the ball to the red zone and Captain Tiedemann took a ball off his bootlaces and offered a “don’t argue” for the simplest of tries. At 17 – 3 it looked like the floodgates might open but it was not to be. It was nothing short of miraculous how such scrummage decimation was not converted to points. Molia, Henderson, Monro, Phelan all had good thrusts to no avail. The next try was sheer magic when Armstrong gave quick service from another tight head scrum and The Maestro stroked a diagonal for Horton’s brace – a thing of beauty and a 24 – 3 lead. Then against the flow, Clarke sent #3, Alec Boyd who had been a real nemesis and much maligned to this point with “fringing play” and marginal tackles, on his way. He beat two tacklers and had the last laugh with a try under the sticks, 10 – 24. The heavens opened, an ill omen!

At around twenty five minutes, Buckley was away on a counter, decided on a chip and chase and the chip slithered off the side of his boot into the hands of a fast-closing #6 who raced thirty meters, untouched and you could have heard the proverbial pin drop! A 17 – 24 score line! Could the impossible actually happen? The bonus point was secured but the win was not. The forwards took control, marching a scrum, soon after, for fifteen meters and Armstrong dropped on the ball, 31 – 17. With the clock ticking down, Morris at #9, fed Kleeberger and a rampaging Panga took it 35 meters for the final score, 38 – 17. Phew and hats off and good luck to Lomas! Our M-o-M, Lomas, unquestionably, #8 Clarke and for CW, Keogh, although Dingwall was also non-stop. There were moments of very good football from CW when it all looked easy but against better opposition, today’s performance could well have been disastrous.  It is off to Jericho next Saturday for the last game of the competition, with final placing still up in the air. There can be no complacency and there must be less error. It needs to be a day of actions. Go, CW!