One More Step - Albeit, A Shaky One! 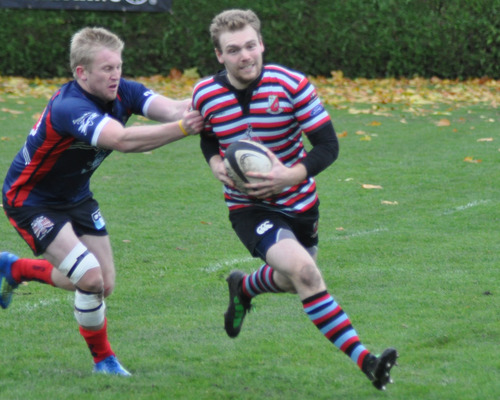 KEENAN HORTON CROSSES FOR #11 & RUNNER UP FOR TALLY TOPPER

This week, we revert to an excellent report from the B.C.R.U. communications man, Andrew Smith, who saw the match.  Unfortunately, (maybe, fortunately, for CW players, the club was unable to have a scribe at this one.)  Watching the Twitterverse, things seemed well in hand at the interval with a comfortable lead but when next viewed "21 minutes in", the score was 20 - 19 for the visitors, a scoreline which held up.

"The Castaway Wanderers led 20-7 at the half but were held scoreless as a relentless Ravens side poured everything they had into a two-try second half performance.

The opening 40 minutes at Jericho Park saw CW with the wind at their backs and some flawless kicking from Canada 15s Player of the Year Ciaran Hearn kept the Ravens pinned inside their own half under pressure. Speedy winger Keenan Horton opened the scoring for CW, crashing over in the far corner.

Canada sevens standout and Ravens winger Conor Trainor made his presence felt and forced a rare turnover in the half, intercepting from nearly 50 metres out and sprinting in under the posts for a try. Standoff Tom Luke kicked the convert for a 7-5 Ravens lead.

CW regained the momentum and recorded three tries before the half to lead 20-17 with tries from forwards Gord Kehoe, Andrew Tiedemann and winger Jonny Morris.

"That was really a game of two halves where the wind played a big factor," said Ravens standoff Tom Luke. "When they had the wind they had the momentum and controlled set pieces. When we had it in the second half, we were able to turn around and put pressure on them."

The second frame saw the Ravens with the advantage and when CW hooker Ray Barkwill was sin-binned, the hosts suddenly had an extra man as well. With the playoffs on the line, the Ravens mounted an impressive comeback marching their way into CW's 22 before putting Garner Lea over for a score. With Barkwill still in the bin, Ravens kept up the pressure and it was Jim Yeganegi who went in for their third try. Luke tacked on the conversion and saw the Ravens trailing 19-20.

The Ravens kept up the momentum when the sin-bin was over and with less than two minutes to play were rewarded with a penalty direclty in front of the sticks. Knowing they had to get the bonus and not just a win to go through, Luke kicked for touch and secured better field positioning for their hefty pack. After several phases the Ravens came within inches but the play was blown up and CW were able to turn over the ball and put it into touch for the win.

"[Ravens] played like the better team today but we pulled it off," said CW winger and try scorer Jonny Morris. "We had our big guys out there who kept us level headed and it was important that we were able to gut this one out. Next week it's do or die and we know we can't play like that in the playoffs."

For the Ravens, the loss brings the season to a close as they wrap up at 6-8, five points shy of the playoffs.

"Our season was really a mixed bag where the first half was great but the two and a half month break really halted our momentum," added Luke. "A tough three games against Burnaby and James Bay to start the second half hurt us but it was a great end to the season so hopefully we can build on that heading into next year."

As predicted, Jericho is a tough venue for CW and no matter what combination is fielded, a wounded Raven is a tough opponent.  Credit to the Ravens, winners on the day, excepting on the scoreboard and a heads up to the Tricolors as their upcoming, semi-final opponents, James Bay, really flexed their muscles, cross-town against Meralomas, a squad that kept CW on their toes just last week. Credit due to a focussed "second half" of the season from the doorstep of demotion to a current four game win streak in this league isn't too shabby. Three weeks to heal and prepare.