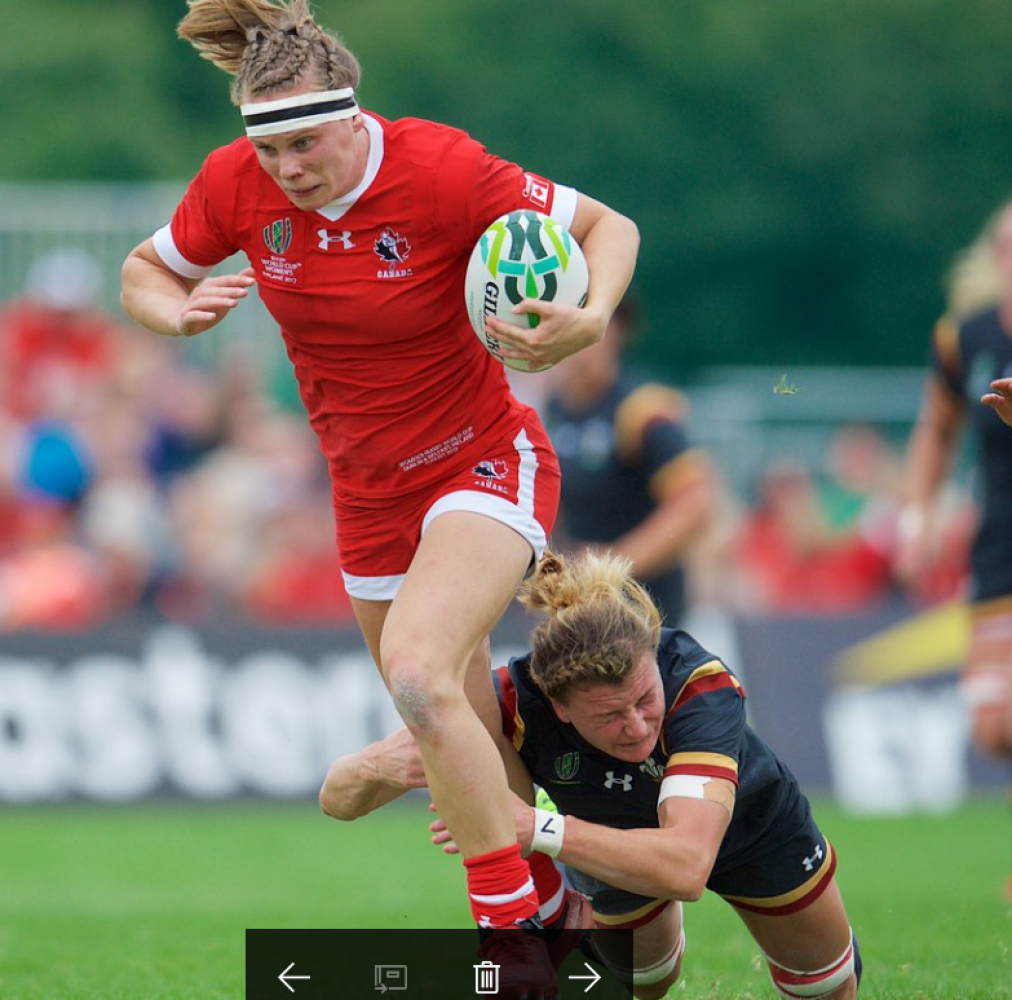 Despite CW’s Karen Paquin escaping the clutches of a Welsh tackler, once again another good run would come to naught with an unforced error and this was the story of the afternoon in a contest that was somewhat lack-luster from a Canadian pov. From the kick off errors were to become the storyline of the day and even though the Canadian Women throttled Wales in the second half (not allowing them out of their own half), they could not punch over tries due to a stalwart defence and a match official who seemed to let the Welsh get away with blue murder at the break-down, off their feet, off-side and entering from the side, enabling them to slow down ball and handily get to the next ball-carrier.

The situation with only three pools means that the pool winners automatically go to the semis and the next best “points earned” record joins them. At the moment that would be U.S.A. I don’t have an alternative format for this permutation of teams but it doesn’t seem satisfactory. Should there be teams tied for the fourth spot then points for and against will be the deciding factor. So it is all on the line against the Kiwis on Thursday and based on form, I’d keep my money in my wallet for this one. I still like the fighting spirit of the women and Kelly Russell (W-o-M) is really special. It’s never over ‘til it’s over and we’ll be roaring for them.

At home last Saturday, some fifty plus folk gathered at The Temple to take in the game. Marlene Nedved and Laura Crow-Hutchens, flipped pancakes and Caroline Crossley and Olivia Apps directed traffic, a great occasion and fun for all in attendance.

The Home of Eight to Eighties

Bears Beat The Rock
On Saturday afternoon the B.C. (Men’s) Bears defeated the Atlantic Rock, 20 – 13 to remain undefeated in the current CRC campaign.  The Bears will now play Ontario on Wednesday to determine this year’s winner.  CW's Cam Polson and Dustin Dobravsky started in the scrum, Dustin being lauded in some circles for his game and Doug Fraser came in off the bench.  This pundit missed the down-load but talking to some who didn’t, “didn’t miss much”!  We’ll try to capture Wednesday’s Final to see if the standard of play is improved.  Anyway, well done, B.C. go for the gold!

NSMT Program.
Did catch Victoria Channel 6 weekly sports show – ‘Game On’, Sunday and listened with interest to comments from Gareth Rees (RC’s Director of Program Relations).  Gareth stated categorically in response to the question; “Why not choose a Canadian”? (paraphrased)....  "There is not a Canadian qualified to do the job. We don’t have anyone with that kind of international experience.”  (Perhaps John Tait but his learning curve from VII’s to XV’s would be too steep.)  Well, this pundit makes the point that we have had the last two coaches whose results have shown that perhaps they did not have that kind of experience either!  If this is the feeling of the RC Board, (perhaps influenced by IRB funding for the need to have a “name” to give credibility), then it is nigh time that we established a “coaching pathway” along the lines of players’ “pathways” to the top.  So, it is pretty clear that we will await yet another “off-shore” name to lead us to the Promised Land. (Ed.)

FOOTNOTE: Interesting to see from the RC website, Coach Anscombe has not been booted to date!