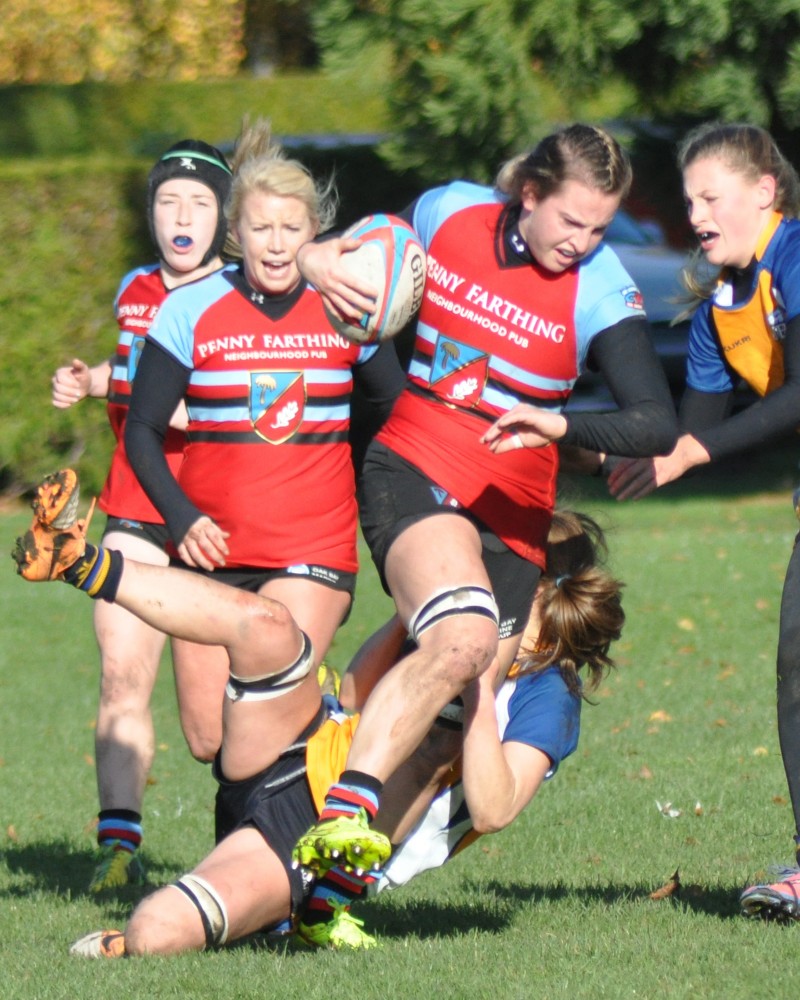 The scoring opened in the CW vs. UBC game very early when the speedy UBC fullback received quick ball from a stolen ruck, outflanked what had been attacking players, for a sixty meter romp to the line. CW was quick to equalise when Zussman returned the compliment, alertly intercepting a UBC attack to scamper seventy meters for the tally. CW responded with good retention for prolonged phases, finally using the ball wide to a speedy, Audrey March for a 12 – 5 lead. UBC countered with some sustained pressure and quick transfer which saw their center freeze her opposite number with a clever “stutter and go” to cross for a 12 – 10 line. The play was of a very high standard, with long spells without a whistle, indicating the skill level on display.

Strangely, from this point to the break it became one way traffic for CW whose smaller pack worked like terriers for quality possession and retention. Zussman at #10, classily organized waves of attack for a group of talented runners who picked their lines and off-loads cleverly. It started with CW’s response to the Bird’s score when Katie McNally at #15 “filled”, only to be stopped on the line. The TBirds won the ruck but an alert Nedved dived to block the clearance, one CW recycle and feed to an unstoppable Erika Shaw for a 19 – 10 lead. Next it was Zussman again with a dummy and break, slip to Galbraith on to Britt Waters and a 26 – 10 lead for The Tricolour. It was Waters again who was fed for her brace after some quality team build-up, 33 – 10. It was all CW as Shaw was to cross again, crashing off a ruck from five meters. 38 – 10 (Galbraith adding a bunch of “extras”). Nedved then made a quality break, fed Waters to Mc Nally for a deserved try. Katie played a ‘cracker’ on this day. 45 – 10 at the interval.

After CW had substituted liberally, UBC sensed some chances and came out flying. Their lively fullback finished a nice, side-stepping forty meter run to cross very early, 45 – 15. Shortly after, this diminutive speedster crossed for her hat-trick after a fifty meter scamper and evasion of three “would-be” tacklers, 45 – 20. With UBC coming on, it was fortuitous that the next score went the way of the Home team. Their wonderful, hard-working hooker, Crowe-Hutchon, robbed an attacker in a maul and out-stripped her chasers over forty meters for an “against the flow” tally, 52 – 20. UBC’s fullback was again in the spotlight for yet another lengthy run, evading some six defenders with swerve and side-step, for the Moment-of-the-Match and her fourth try, 52 – 27. Both teams added a final try, Alya Govorchin notching CW’s after another burst and off-load from Captain Nedved. Final score CW 59 – UBC 32 – 15 tries – WOW!

For the Home team, this pundit was impressed with #2 – Laura Crowe, loosie, Steph Hansen who had an impressive second half, Captain and #8, Nedved, again a leader in every sense. All of the backs played well and this started with accurate and speedy service from #9, Sargent. Tudor, Kennedy and Govorchin, off the bench, were “money”. Kudos to both teams in a well refereed, entertaining match.