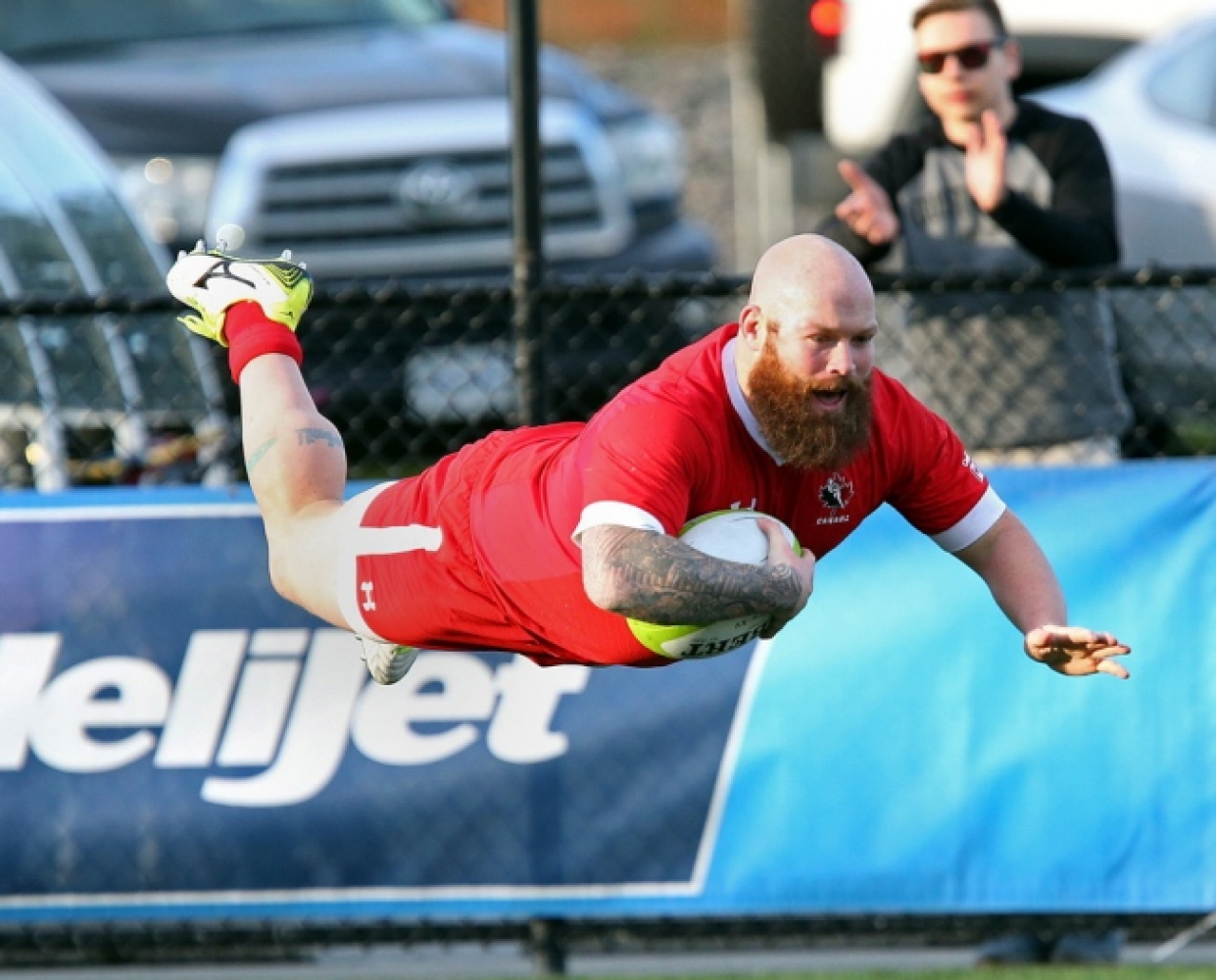 Through One Player’s Eyes

We recently met up with Ray Barkwill and hit him up with some questions about pro rugby in North America. Ray has often been featured with one story or another on our site and we are very proud that he chose to wear CW colours when he first came west from Niagara Wasps.

CW: Ray, we would be remiss in not starting our time with you by congratulating you and your team mates on your successful goal accomplishment on winning the Repecharge. The role you personally played was creditable. Like the proverbial Eveready Bunny, you just keep going on! What is it that motivates you to perform in such an exemplary manner?

RB: Firstly, I am still having great fun playing the game. Kingsley has brought an element that produces fun under reduced pressure and his coaching has reflected on everyone. There is pressure on me to perform as a part of the leadership group. I enjoy the pressure and was motivated not by fear of losing but by the ramifications of NOT qualifying! I enjoy the hard work and of course, the potential always for winning results. The game can always produce a measure of luck but the better you are the better chance of making your own luck.

CW: Let’s talk about professional rugby in North America. You are about to embark on your third season with this venture. The first year with PRO Rugby saw that league fail. MLR took its place and seemed successful in its first season, with your team, Seattle Seawolves as underdogs being the inaugural Champs and now with two expansion clubs it enters its sophomore season. We note that PRO Rugby head honcho, Doug Schoninger has filed a $6,000,000 lawsuit against former USA Rugby CEO, Nigel Melville. Interesting! Did PRO Rugby fail or what issues caused its demise in your opinion?

RB: Basically, its structure. With Doug as head of his own league there was far too much micro-managing. Doug was an extremely successful business man but this venture was something totally different. Teams did not have good rugby people in place and in some cases, not even sports people. Coaches were arguably, not up to the level of many of the players. Commitments were sometimes not kept and the general organisation of day to day operations such as travel, food and accommodation were often overlooked. This would have a different story for every player and these comments simply reflect comments from peers.

CW: On the contrary, MLR seems like it might have a better handle on success. How does it differ from its forbearer?

RB: The League is run by a commissioner, Dean Howes who has a twenty year background in sports management. He was a management partner in the St Louis Blues and then CEO of Real Salt Lake City soccer. He heads up a Board, consisting of representatives and owners of the various franchises where clubs share their successes. There is considerable emphasis on the product being fun, affordable and entertaining – the game is an event! This feedback enables clubs to create fixes and expansion ensures that newcomers are suitably stable to survive. An example is the Toronto Arrows where a structure is in place simply extrapolating from a very successful Ontario Blues history. Social media is organised and is a big part of it but basically, local ownership is the difference.

CW:  Many pundits have argued that for Canada and the USA to ever become a Tier 1 country we need to have professional rugby.  What do you think?

RB:  I see professional rugby as a component of a pathway from club to region (CRC’s) to Canada ‘A’, perhaps pro rugby comes next and finally National team selection. The bottom line is the fact that the money is an enabler; it needs to be a living wage for the season.  Players need to be focussed solely on rugby.  Pro leagues attract players from elsewhere and the standards rise.  It’s not just the money, playing pro rugby means the players have to interact with the fans, run clinics and be promoters of the game.  The fact that bills can be paid takes this worry off the plate; it enables full-on rugby and nothing else during the season.  Under such terms, how can standards not improve?  The training and competition is an environment for improvement, so, short answer, yes.

CW:  Clubs could well argue that professional rugby would diminish their role – detract from their traditions and culture and maybe threaten their very existence in times of already, sparse numbers.  As a visionary, how do you see the roles of clubs?

RB:  There has to be a paradigm shift in the thinking of clubs.  They can still put emphasis on winning trophies if they wish but achieving excellence would be a better goal.  I believe we would have to re-think the structure of our current leagues, particularly in B.C. which is the only part of the country that plays rugby in winter.  Perhaps the Fall could be for Premier play when pro players could probably be available for their clubs, their presence should raise standards with the post-Christmas play, seeing a different competition where clubs could promote those players on the cusp of playing at a higher level, with the addition perhaps when the pro thing becomes cemented, for players who maybe spending much time on the bench to return down for a week or two, this concept has components of the hockey model.

CW:  If you could call on the Rugby Canada genie from the lamp, what would you wish for the game’s development?

RB:  Clubs have to use player resources more to develop the game at the elementary level. My home club, Niagara Wasps have used this model and in some 8/10 years have grown a large number of junior players.  I say players because there is not always the teacher talent/interest to initiate things.  The players acting as trainers in 2/3 schools may be able to expand the coaching base and if any minor amount of remuneration can be made available, this is always a magic potion! (ED.  Perhaps easier said than done but has it been tried?)

CW:  As a presenter at the recent B.C. U19 Men’s Final, you had the opportunity to get a glimpse of our men’s future.  What are your thoughts about what you observed?

RB:  I loved it.  It was a high level of play under terrible weather conditions and there was a high skill level with players playing the game “out of the box” – creative, relying on support and using the ball.  Play did not follow pattern all of the time, there was unpredictability but the skills ensured the success.  Hats off to both teams.  If there was more of this, the future would look very good.

CW:  What are some of the challenges for the MLR?  How do you see its future?

RB:  The main challenges lie in expanding the corporate sponsorship base.  We have a very affordable product for a family – e.g. four tickets and a beverage or two for under $100 is a great deal for entertainment.  Kids and communities can easily identify with teams and the teams are learning from each other’s successes.  The digital and social media world need to be tapped even more.  All of this will snowball for a classier product.  The future looks positive.

CW:  How do you like the Wolves chances of a Re-Peat?

RB:  I believe it will be a very tough challenge.  All teams have been a fast study of success.  It seems that, across the league there are more overseas players.  Our roster has not greatly changed but we have been a little slow out of the gate with the coaches just starting to implement patterns.  Make no mistake the Wolves have some very good players which we more than proved as last season went on.  But the very aspect of better competition will make it challenging.

CW:  In next year’s World Cup, you will be the second oldest player since its inception, quite a feat!  Surely you must consider hanging up the cleats after that!  As such a positive guy what path do your see your life taking?

RB:  First off, I want to compete for my spot and not just be along to take it in.  As part of the leadership group, I need to provide on and off the field support for guys; I need to push myself to be the best and challenge the team likewise.  I am not going to the World Cup to just play, I fully expect us to be pushing to win a couple of games.  I am proud of that age record, pretty good for a guy who did not get his first cap until age 32 and amassing some 57 in the next six years.  (Ed.  No argument on that, Ray!)  I simply enjoy the challenges and have great fun playing.  As for the other part; I have a teaching degree with majors in PE and Science but it is pretty tough substitute teaching a Home Ec. class!  Really, I would like to pursue the coaching side.  I hope to expand that role with the Seawolves this year. Maybe I will coach professionally or at a University or College – men or women, making my living and mark in this capacity.  It is unknown but I have goals.

CW:  Thanks Ray for your time.  It has been great to hang out and the club wishes you the very best for the upcoming season.  As for RWC, it is not unfeasible to see a couple of W’s and we know you will be doing your damndest to make that happen.  Thanks also for being a good voice for our club.

(Ed.  Today’s photos are an attempt to demonstrate Ray’s “pathway” – from club to country.)