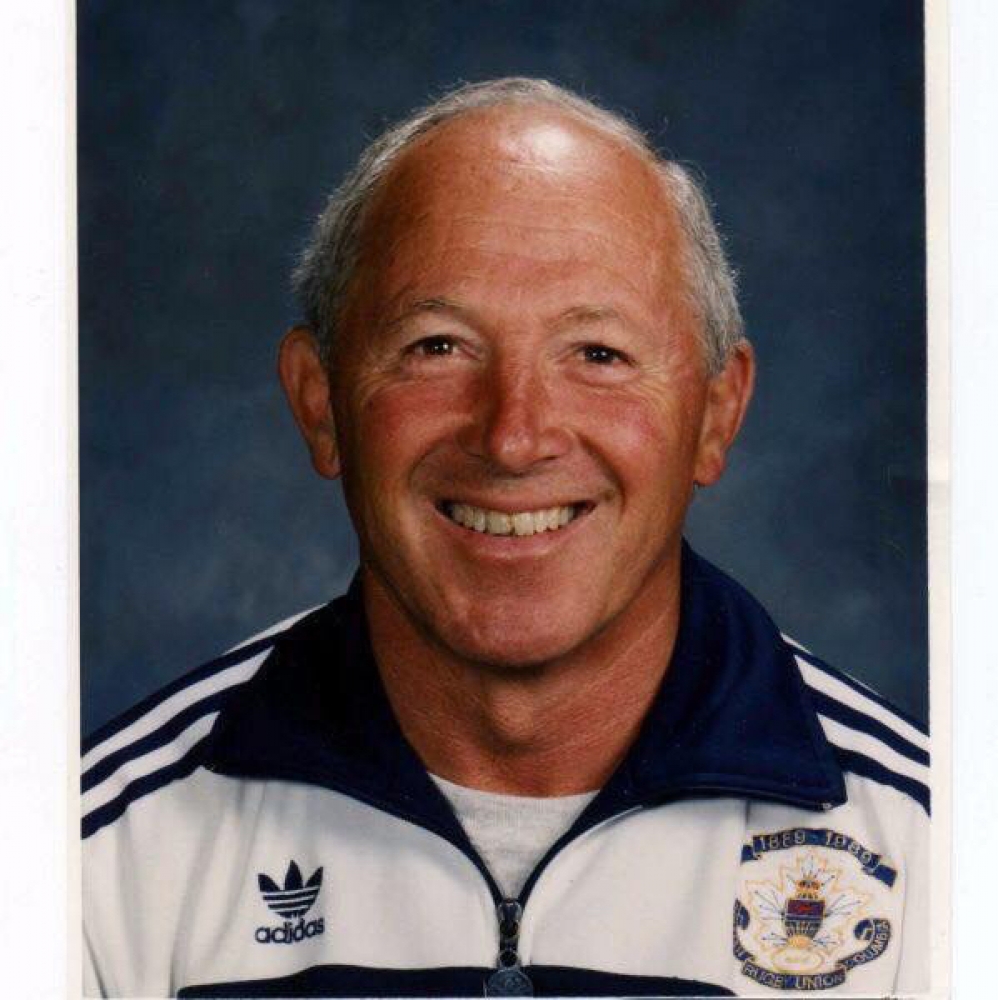 In recent days much has been written in a variety of sources about the life of Don Burgess.  ‘Burge’ was in many ways, a rugby Renaissance Man – one ahead of his time.  Nearly everyone who has responded to the loss of Don, has referred to the values and qualities of Don, the man.  Anyone who was ever connected with Don would have their own personal memories, for he was a person who left an indelible impression.  In paying this tribute to Don, we have quoted from and sourced a couple of references.  This writer will try to present an image of Don that will help to think about him as a dynamic, humorous, diligent, innovative and caring man.  CW invites readers to comment with your own personal, relevant recollections on this site.  We thank those whose Facebook quotes we have used.  Don was recently remembered with a wonderful Obituary, snippets of which will be included; compiled by the Times Colonist’s Cleve Dheenshaw.  If you have not read this memory of Don’s life, it can be viewed HERE.

All of Don’s “on field” life would take a massive chronicle, so some brief examples will have to suffice.  We kick off the saga with “legendary”.  His rugby magic brought success to the teams he played with or coached and earned him headlines in the British Press, such as; “Burgess Superb” and “Brilliant Burgess”.  Primarily a fullback, Burge also played scrumhalf, standoff and center.  His elusive, side-stepping of opponents, pin-point accuracy as a place kicker and thumping tackles were renowned and envied.

His notable feats on the pitch were for the Oak Bay Wanderers, the V.I.R.U. Crimson Tide, B.C.R.U. and Canada.  He was first capped in 1962 and he played for Canada on seventeen occasions.  He was selected to tour Britain and played 14/17 matches at fullback, the moist notable being a 3 – 3 tie with the Barbarians with Burge booting the three points.  One report in a Welsh paper noted Burgess’ “thundering tackles” causing havoc; “…. (He) tackles like an outraged bull moose!”  In 1966 the British Lions were on their way home from N.Z. and Australia and they stopped off in Vancouver for a match with B.C.  The Lions led 3 – 0 when B.C. replied with a try of their won.  Burge coolly stepped up and converted it and he later added the game-winning penalty for an historic, 8 – 3 win.  Don, being a self-effacing type when it came to personal recognition, would probably have regaled a couple of highlights of his career without any mere mention of the role he played.

Following his playing days, Don turned his energies to coaching with considerable success, culminating in his selection as Canada’s first National Coaching Organizer and he was instrumental in establishing the National Coaching Certification program.  He then plied his mind to the innovative side of the game, inventing the Tetley Tee.  Today, tees of all shapes and sizes grace the global fields to assist scoring and pace of play.

We now turn our tribute to a tapestry of quotes from players and students who were, at some time, under Don’s tutelage.

** “Burge would go to his (a student’s) house every morning to get him out of bed, drive him to school and feed him breakfast.  Regardless to say, the student was a very good rugby player but Burge kept him in school for him to graduate, go on and have a successful career and life.  This was not the only student Burge kept in school.  One of a kind – a legend!”

**”He will rarely be called a “tower” but he certainly was a “tower of power” with an indominatable spirit.  Best memory was playing as a 19 year old for Oak Bay and watching Burge lace his boots because we only had 14 men.  He would, and did anything for the game.  I’ll miss his laugh.”

**”Don was special because he was the game.  I remember going to his house early mornings to listen to test match broadcasts on BBC short-wave, more often than not, accompanied by breakfast.  Burge was generous and gave me opportunities to enjoy our sport and the fellowship that accompanies it.  He managed to bring in films of international matches and show them at the club.  We watched the 1973 Barbarians Vs All Blacks more than once one evening! ......”

We culminate these with tributes from Canadian Internationals.

**“A true gent who taught so much to so many.  From my first rugby practise at Windsor Park as an eight year old to hours of kicking and game advice.  I feel truly, truly privileged to have shared time with Burge.”

**”What a great rugby man and wonderful person.  Gave me so much advice over the years on life, rugby, kicking and being the best #9 I could be.  He cared so much about the sport and all of us as people.  Best coach ever.”

**”I remember him gently trying to get a concept through my un-coachable head.”

**“I was happy to have had him watch a few games of mine when I was younger and have great feedback and guidance from him.”

Regardless of the player’s club affiliation, Don’s desire for him/her to simply become better overrode any parochial feelings that one might have thought Burge could have carried.

Finally, we took some time with Burge’s long-time friend on and off the field, Ray Calton, to capture some other essence of the man.  Ray knew Don for nearly seventy years.  They first played against each other in Grade 13.  Ray, being a little older, was an established H.S. ‘all-rounder’ and Burge, a track runner, was a new-comer to the game.  Both went on to register memorable rugby careers yet despite this, they only played together for about 6/7 seasons with the Wanderers but they had plenty in common and formed a memorable, life-long bond.  Ray, on reflection, noted how hard Don worked when he knew Canadian Tours to Japan and Britain were in the offing, noting; “Don would play anytime, anywhere!” He further noted, he thought Don even had about three or four games with James Bay along the way.  “Don’s affiliation with the game of rugby was more important than affiliation with a club.”  Together, on the field, Ray recalled probably their most memorable moment was when the Wanderers defeated Kats to win the 1962 Rounsefell Cup.

The question of what characteristics about Don, Ray would never forget, elicited a number of responses and anecdotes.  Ray started with; “He was the eternal optimist.  No matter what circumstances befell Don, he just knew all would be okay.”  Further, he added; “He had a great sense of humour and he could tell a tale, usually, with a measure of embellishment!”  Ray went on; “He was a creative and a very proud man about all of the tasks he undertook – a master of innovation.  Often his decisions were made in faith, any worries might come later.”  Ray smiled when he recalled how Don shrewdly sold his tee invention at U.S. dollars and cleverly had them manufactured and delivered out of Hong Kong, eliminating all production and sales worries, with the only need to happily accept the revenues.  Don also successfully presided over the VIRU for a term, (with Ray as Treasurer), ameliorating any parochial issues that arose between the clubs, with humour and style.

These are the memories on the record but it was with great joy that I listened to Ray recount numerous yarns off the record, all recognizing what a tremendous bloke The Burge was, endearing himself to all.

I have my own memories.  As a young “coach” (more accurately, team manager), I vividly remember Burge sidling up to me one day at UVic and asking; “Have you ever viewed a game from the end zone?”  What a revelation that turned out to be and a mode often observed with club coaches some forty-five years later.  We have all seen Hyde-Lay, Tate and more recently, our own Manning, observing a good portion of the action from this viewpoint.

It is CW’s pleasure and honour, on behalf of the family, to announce the occasion when we can collectively remember, honour and share our stories about the man, Don Burgess as we celebrate his time with us.  A Celebration of Don’s Life will be held at Uplands Golf Club on Sunday, April 8th at 2:00 p.m.  Anyone who knew Don is welcome to attend.  Burge, akin to many legends, gone but not forgotten!