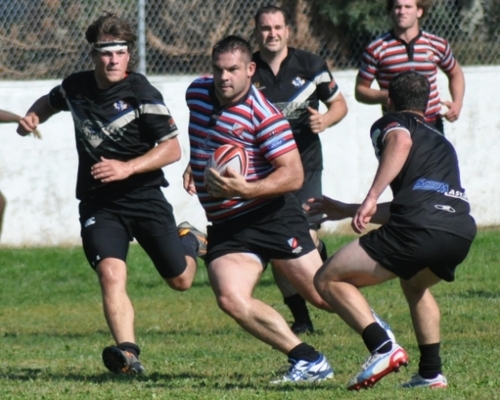 Scotty ('The Bus') Franklin, on the rampage at Gordon Head.  Relishing his return to #8, Scott had a solid game, being named MoM.  (Game photos posted - credits, Ron Willems.)

The two matches at Gordon Head produced somewhat stereotyped results, with CW opening up big leads and the home team, turning it on for the second stanza to close the gap and make the final scorelines rather close.  Still two W's is not to be taken lightly against a hungry opposition.  The Firsts featured one guy (if he got back from Vancouver from a job interview), the Captain of the Thurds, a couple of Thurds team mates, Noa on the bench and Ken Goodland at #10!  One aspect of Ken's game, the chip and chase over the last defender, came in handy as he demonstrated a proficient game with the boot, getting The Triclors out of swampy positions - 'onya, Ken.  Good to see Junior Grads, Riley Macpherson, Ty Munro in the house and Kiel Horan back from a season's absence.  The Ones led 24 - 7 at the break but were outscored 10 - 0 in the second stanza.  The Velox Academy is a young, fit group that will be a force to be contended with in the near future.

The Prems, saw Tieds at the helm after a stint in Auch.  Great to have Andrew back in Tricolors uni.  The club welcomed a couple of newbies who impressed in their first outing - John Braddock who speaks the same funny language as the Bucks Boyz and Djustice Sears from Ontario, a member of Canada's U20 JR. RWC team. Aussie, Peter Van Buren is back and Kyle Armstrong at #9 showed maturity and skill.  His supporting cast in the backs was an oleo of youth and puzzle parts with Mikey Crawford on the wing, Mike Mizerski back for another showing to RC, on the other flank, newbie Mike van der Westhuizen accompanying Bruce Watson in the centers, Aden Jack back from Oz @ #10 and Evan Seale in the custodian's spot.  This group had the Velox reeling at the half with a scoreline of 31 - 3, with the pack somewhat brilliant in the loose and with ball distribution throughout being outstanding.  When they went up to 35 - 3, early in the second half, it seemed that they forgot what the task was and almost didn't finish the job!  Kudos to Velox who outscored CW, 24 - 0 for the run home and a final 36 - 27 scoreline.

Much to be taken away from fifty minutes of good football and thirty minutes in the wilderness, time which the players hardly did themselves justice.  Hopefully, with the outcome being a renewed commitment on the practise pitch and a realisation that the season is underway.  It will be very much back to earth next week when the Vikes come to the House of Windsor.

B.C. Grizz Taken To The Cleaners In Ontario......  27 - 50 (four tries vs eight)  Obviously the defensive effort was not the same that was witnessed in Victoria, when the Bears held Ontario close to within four points.  One more to play in this CRC Series Vs Prairie Fire in Edmonton next weekend.

A good weekend for CW rugby - "FROM EIGHT TO EIGHTY."