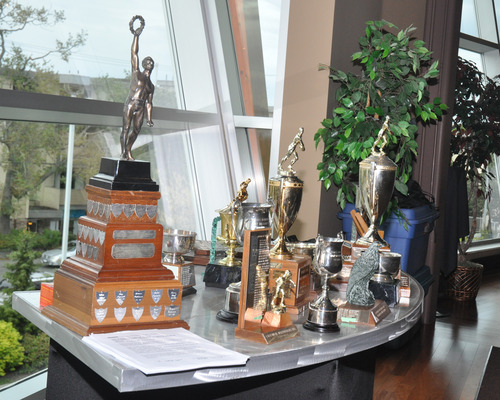 This event is one of our club’s special occasions. It was an evening of celebration as we had Yak Dala and Ciaran Hearn present and were all thrilled and proud for them and their Sevens team mates’ achievements on this day, qualifying for Cup play in Glasgow. These two, plus a capped quartet of FRF, fellow Internationals in the House, added to the evening. It was bitter sweet, in that our Premier guys felt they should still be in the hunt for the prize but accepting that is not the case.

Guests for the evening included spouses, partners and friends. Recipients included, Girls MVP, Caroline Crossley, a first ever for CW. You are reminded to view the “Photos” of the evening, showing the recipients and the general tenor of the evening. Pictured in this blog is the winner of the most prestigious award, The Johnny Shepherd Award in honor of an Oak Bay Wanderer who gave his life in WWII. The award is voted on by the players on the evening and recognizes sportsmanship, duty and honor. This year’s recipient was Prems Captain, Andrew Tiedemann. ‘onya, Tieds! We also note Premier MVP, John Braddock. Braddock showed his value pre-Christmas during a slump when the Club’s performances were such that we were precariously close (perhaps a two point W over Lomas, being the difference), to potential “demotion”. John continued on to best his tight head opponents for the remainder of the season and being welcomed as a fellow “International Honorary FRF Member”, Hubert Buydens claiming that the “swap” was a pretty fair exchange! Braddock was also an iron man, missing only one game. ‘onya, Kiwi John!

We could expand on the importance of each of the awards and the recipients and by simplifying events is in no way to demean the significance of the recognition. Winners were; Gord Kehoe ( Prems Most Improved); Jacob Lamb (Ones MVP); Ty Haight (Ones Most Improved); Miles Dingwall (Most Conscientious Trainer); Riley Ilnicki (Pigs Trotters Award…..doing the dirty stuff); James Knowles (Thurds Man of the Season); Doug Hepp (John Morley Award – Club Man of the Year); Spenny Robinson (Outstanding contribution to Junior development – Oscar King Award); Caroline Crossley (Junior Girls MVP); Lachie Kratz & Connor Hills (U14 Boys MVP’s); Gavin Kratz (U16 Boys MVP); Braonian Masterton & Jay Zimberlin  (U18 Boys MVP’s) and Keenan Horton (Rookie of the Year). Brent Johnston whose DNA includes CW strands was recognized for his efforts with Club organization and development was awarded the Dick Ellis Memorial Award. ‘onya, Johno!

Finally, to our presenters whose words epitomized what CW stands for and outlining the quality of the recipients and to Kenny, who injected his Eastener’s sense of humor, impeccable diction, wisdom, couthness and propriety in presenting The Cruddies – well done! We retired to The Temple to witness the craft of Ron Willems and Shaun Barry with the Annual Video, highlighting the season’s successes and king hits. It was a great salve to a big night when we woke in assorted states to watch the Sevens make it all the way to the Cup Final. Go, Canada, go…..go Ceedub – you are; “A Grand Old Team to Play For”.  The Ruggernut.