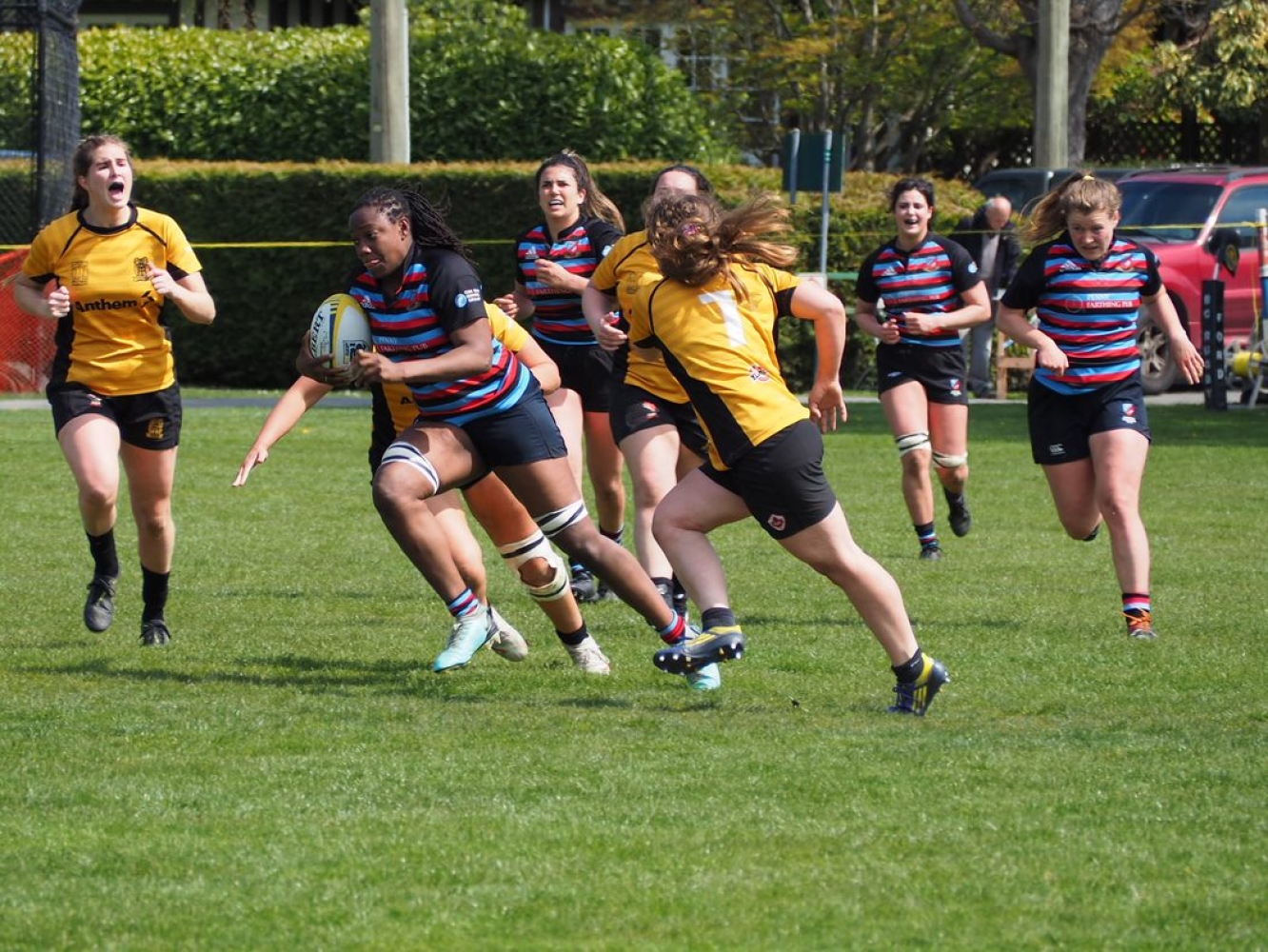 Our first game report for Monday comes from Vancouver.  On Saturday, King Kyle and his Merry Men set out on a Monumental Mission to take on #1 seed, Bayside RFC.  Despite a late season slump, the boys had scraped in at #8.  Might I suggest they covered themselves in glory in this one, reducing the points differential to eight compared to 24, the last time these two sides met.  Divvies led early on a pair of Sandner penalties and the spread at the interval was 19 – 11 in favor of the reigning Champs.  The second stanza was an 8 – 8 standoff for a final, 27 – 19 in favour of Bayside.  CW wishes Bayside well as they sally on.  Coach Hepp adds special mention about Alex McCallum, labouring hard in the tight and the loose, Peters a try and a mountain of work and Hohert, being the pick of the pack.  Sandner, Poulton and Stanley were the best of the backs, with Casey adding a tally.  The Don and Lee Wakely from the Islanders added a special brand of grit when they entered the fray.  Well done, all, you did yourselves proud.

On a glorious sunny afternoon back at The House, a reasonable gathering assembled for the CW Vs Caps Women’s match.  Our pre-game presser mentioned the quality day exhibited the last time these clubs met at Klahanie.  Windsor Park was to bear witness to what was a recurrence of more of the same. 24 – 21 to caps at the half as the track meet see-sawed to & fro.  CW still trailed 21 – 29 at the mid point of the second half.  The TSN Turning Point was a penalty try resulting from a head-high tackle preventing a try, it was desperation rather than deliberation.  The scoreboard ticked over, 28 – 29, 35 – 29, 42 – 29, 42 – 36.  Wow!


For Caps, Katerina Josephides was a force all day, Boag, Robinson, and Hake supported well in the forwards.  Ella Marwick at #10 battled with her counterpart and Bill and Poole were always dangerous runners in the centre, Sarah Bill, in particular, had a good day.  Caps were methodical and used their hard-driving pods to gain ground, forcing the defence to expend a deal of energy on defence.  It was a fascinating contrast in styles.  For the Tricolours, Julia Schell was once again, simply outstanding.  She was well supported in the backs with Temi O and Aberg.  Danica Pendrick added the exclamation try to seal the deal.  The forwards were served well with much work from Elliott, Perdomo in the FRF and Hill-Huse and Edwards-Challenger very noticeable in the loose.  CW’s edge in pace served the team well and the support was much improved over some recent outings. Finally, special mention must be given to “money” kicker, Madi Aberg, six of six conversions and I believe a perfect record of some fourteen shots at goal over the last two matches. Step aside, Brandon!


Elsewhere, we note with interest, the once, almost unbeatable Westshore Valkyries, forfeited their semi-final match to UBC.  CW will face UBC as massive underdogs, but this is a group that does not have “adversity” or “quit” in their lexicon.  They have replaced those words with “compete” and “courage”.  Best of luck to our ladies on May 7th.

A good crowd was assembled by 3:00, kickoff time for the Vikes and CW Men.  CW opened well but a dropped ball resulted in a scrum and massive clearance punt from the Vikes, Casey (#10).  A hard-working, fast-following, Robinson earned a fortuitous bounce.  His pace over sixty metres left defenders outpaced, not to mention, shocked!  As the teams tested each other, the contest certainly intrigued and entertained those assembled.


Around fifteen minutes, CW provided some Courvoisier when Finnemore broke a tackle on a blind side break.  The ball went to Bowd whose fingertips “feathered” it on to Adibe, with some work to do but this man as so often is the case, does not disappoint, and again, he was not to be denied, 5 – 5.   On the re-start, UVic went to their strength, running and passing following a feisty run by Yue, however their quick transfer of the ball was read like a book by Bowd.  His pick off, ears pinned, fifty metre scamper at twenty minutes saw CW go ahead 12 – 5, not to be bested.  The next points came from fifteen minutes of intense CW pressure and a plethora of Vikes penalties from CW scrum dominance. Kudos to referee Zussman for her patience, avoiding the use of a card.  Finally, quick ball came wide for Gus Porter to score in the corner and a superb Bowd conversion added, 19 – 5.  One wag was overheard to announce, “That is the hardest, longest, and most painful five points I have ever seen!”  Despite the lead, CW did not exhibit any real element of excitement.  This was left to UVic.  Following the mishandled kickoff, UVic fed quick ball, a nice step from #10, Casey and a hard line by Rikley-Krindle and it was 19 – 12 with the half winding down.


The second stanza started with considerably more energy from the hosts. The tight forwards displayed dominance to set up the next try.  Mike Fuailefau and others were inserted at the fifteen-minute mark and Mike immediately made his presence felt, pumping his solid pins and carrying two tacklers over the line for a 26 – 12 margin.  Two or three minutes later, it was Fuli again, earning his brace on his second touch of the ball, when some five tacklers failed to hold him, 31 – 12. CW soon consolidated their field position again and after some recycles, it was a break from Clark and a feed to Humphries who was not to be denied, 38 – 12.  UVic added their first of the half when Ethan Hager made yet another strong break, Yue and Fatt in the action, and a final feed Nic Carson, 38 – 17.  Hager, having moved from CW to UVic, had one of his best days sighted by this pundit over the past three seasons.  A brilliant exclamation point was added to the affair, started, and finished by Tait, with a few other fingers in the pie, 45 – 17 final score.


Lots to like in this one.  For the Vikes, Hager, Robinson, Rikley-Krindle and Casey in the backs, all had their moments.  Big locks, Newhook and Carson were good value and Yue and Heaney-Corns stood up to their more vaunted opponents.  I must admit it was mystifying that these chaps often ran their attack at CW’s big forwards when their team would have been better served with wide ball, given the little bit of havoc shown when Hager was able to “fill”, or Robinson had the ball in his hands.  This day was all about CW getting some things right and mostly, they did.  Noted a couple of bungled balls in backline ploys and a couple jolted free in tackles, a skill often exhibited in the tackle by big, strong men but overall, Coach Goodland would have been much happier with this effort and execution.  The players gave Johnny Humphries M-o-M, hard to dispute although there many “runners-up”!  So, it’s off to Jericho next Saturday for another crack at the Ravens. We will announce any room for fans to travel with the team, during the week.


Finally, the day’s games were well served by the match officials.  It was heartening to see some members from the younger ranks in the AR capacity, special mention to CW’s McKenzie Eckart.  Nice to see refs mentoring post game, with their touchies for the day. Good job, all.
(Photos, credit, Wendy Norman.) (Content expressed, purely those opinions of the blogger.)