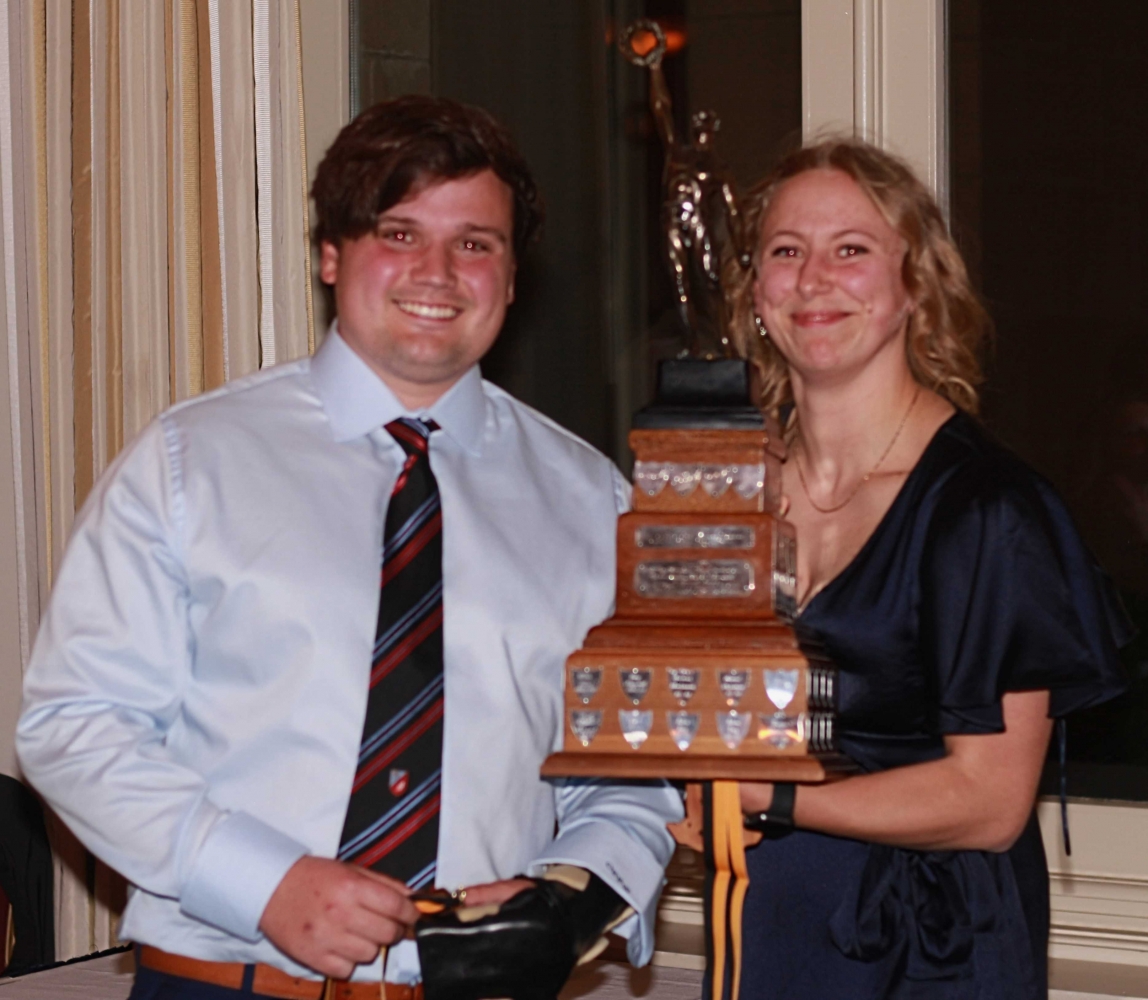 Awards and Other Things

On Saturday last, CW Rugby celebrated the season to date by recognizing those players who either by their coaches or their peers, were adjudged recipients of various Club Perpetual Awards.  The “season” such as it has been, crescendos towards the playoffs with The Tricolours featuring in four of the six Leagues.  In review, we were lucky to have a “season” of any kind and full credit to the BCRU, the member clubs and players for finding a way to be able to play “the game they play in Heaven”!

The evening was a true rugby picture with members from other clubs, Referee’s Society and ex-players present.  Of note, was Julia Zussman, a former wearer of the colours, off to England to ref a Women’s Six Nations match next weekend between England and Wales.  Wow!  The President, Brian Huse, opened the affair with some simple words of welcome and a thanks and congratulations to players and coaches for making the club a positive experience for all. Director of Rugby, Kenny Goodland MC’d the evening and presentations were made by the various team coaches.  Another highlight of the evening was the presentation of a newly minted Award by the women, the Chris Shepherd Award for Outstanding Dedication to the Castaway Wanderers Women's Rugby Program.  The inaugural recipient was Chris!  A most deserving honour.

The presentations commenced with the traditional Cruddy Awards...... intended to bring attention to individual questionable accomplishments throughout the season.  Intended to highlight and embarrass, the 2021/22 Cruddies fitted the bill magnificently!  The coveted Johnny Shepherd Award, deemed the most important award and voted on, solely by players on the night, was awarded to Louise Eriksson and Olly Winser.  This award is for that player who exemplifies sportsmanship, duty, and honour, in memory of a young man who was a Wanderer player and gave of his life in WWII service.

This past weekend did not clarify the playoff picture any as many teams jostle for post-season playoff positions.  Most pertinent for CW was the Men’s Premier League where OB Ravens and CW vie for a second-place finish and critical “home game” advantages.  Currently, Ravens boast 25 points and CW, 24, both clubs with a 5 – 1 record.  CW hosts the Ravens next weekend and with the return of a license on the balcony, the 16th Man should be out in droves.  The Divvies have dug a hole for themselves and will face adversity when they play the OB Rippers, in one of two curtain-raisers.  The Rippers are “table-toppers” with a 6 – 1 record and it will take a monumental effort from the Divvies to rise out of their currently tied, fourth spot.  Not to bemoan any point because it is rugby, and anything is possible. The Third Div., Islanders will host the storied Vancouver Kats arising from the ashes in the shadows of their former greatness.  The Kats trail the Islanders if the records are correct, however, they have a game in hand in a topsy-turvy, twenty team League.  Our Premier Women have a bye, and the Divvies will face Simon Fraser on the road, in their final game of a memorable campaign.

A strong CW presence on the Senior Men’s Sevens team, off to Singapore prior to returning home for what has become an iconic event on the sporting calendar, the Vancouver Sevens.  CW offers our best to all and we highlight Anton ‘The Magician’ Ngongo; Brennig Prevost (UVic); Lachie Kratz (Nola Gold); and Jarvis Dashkewytch (UVic and a Westshore cameo).  This program appears to be going in the right direction and we wish them well.  A footnote from this pundit is a question as to what’s happened to Jack?  In an earlier showing I thought Jack Carson showed much promise with the Sevens program, but he is causing teams fits as he suits up at #9 with UBC.

For those of us in our twilight years, may I encourage you to “stick around” for this one?!!

Finally, with thanks to the NZ Herald, comes the following quoted material;  “Having entered a period of "exclusive targeted dialogue" with World Rugby last year, the United States' bid for the 2031 men's and 2033 women's World Cups is set to be approved at a council meeting on May 12.

Organizers are confident it will break the 2.7 million record attendance set by England's 2015 World Cup with NFL mega-stadiums belonging to the Dallas Cowboys, Atlanta Falcons and San Francisco 49ers committed to hosting games.

Packing out those stadiums would be a seminal moment for rugby union with the bids' backers drawing parallels with the impact the 1994 World Cup had on football in the US.

Biden, a distant cousin of former Ireland full-back Rob Kearney, is known to be a passionate rugby supporter and the bids have attracted cross-party support in Congress, which should guarantee federal funding.

"Joe Biden's administration is leading the charge to ensure that we meet the commitments to World Rugby that are required, along with a commitment from the president himself," Joe Brown, the chair of the US bid, told the UK's Telegraph Sport.

"A letter from the president is going to both Bill Beaumont and World Rugby in the next 10 days or so committed to full support of the event from the federal government."

World Rugby is looking at a targeted investment program in the country over the next 10 years while getting the sport recognized by the National Collegiate Athletic Association, which controls funding of college sports, would be transformative. Again, Young looks to football and how the 1999 women's World Cup, which the USA won as hosts, cemented soccer's place in the US sporting consciousness.

"There are so many lessons there," Young said. "Within the rankings of the women's games, we're always in the top four or five so it's almost a no brainer to use that success to drive things with the men's side of it following suit."

As much as the USA stands to benefit from hosting the tournament, rugby union itself stands to gain far more from cracking into the world's largest sporting marketplace. Young believes the television rights for the Six Nations will "grow exponentially" while Brown says the players themselves will have the opportunity to establish themselves as global superstars.

"The sport is really untapped on many levels," Brown said. "Right now, the players are probably not known or well recognized here in the United States. From a market standpoint as soon as they can tap into the United States, their profile is going to explode."

And so, begins the week!