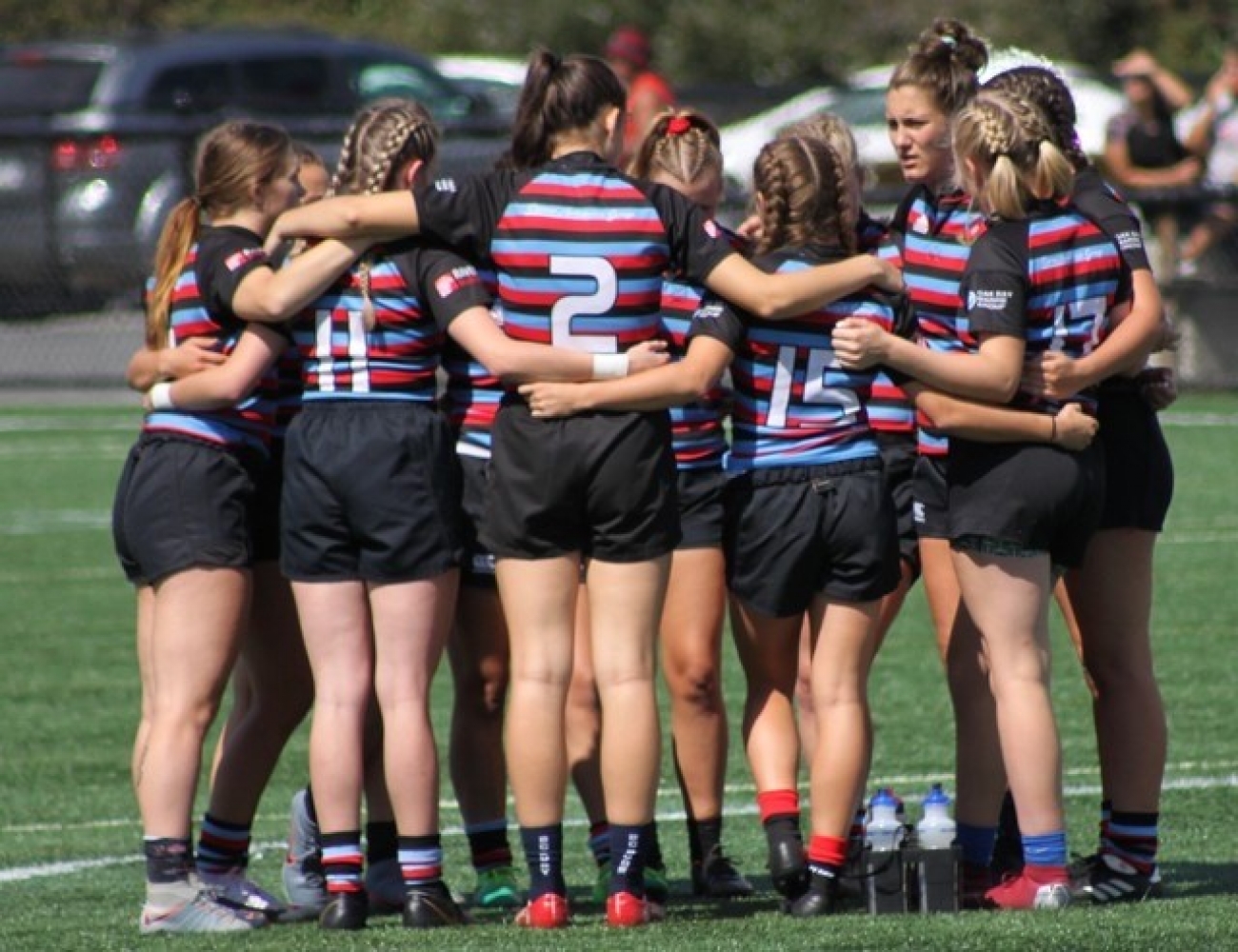 Recently our roving reporter caught up with a number of CW young ladies who have just graduated from High School. The girls were asked a few generic questions as to their rugby involvement and their future. Most of the young ladies have followed the club pathway from U14 to U19 and this season’s B.C. Championship. We congratulate them all on their achievements.

1. When did you start playing rugby with CW?
2. What are some of your rugby achievements or contributions?
3. Have you had any “cool” community involvement around rugby or any other activities?
5. Can you summarise in a sentence or two your thoughts about playing for CW
6. What is a favourite memory about youth rugby?

Renee is going to Camosun to work on her Medical Office Assistant degree. She is planning to play for the CW again, this coming September.

She has; been a Flag bearer and ball girl for ARCs and Women’s 7s; helped coach CW minis and U14 girls; refereed CW minis and U14 girls; sold 50/50 tickets at the 2016 women’s sevens and ARCs to promote Belmont Secondary rugby. Her community contributions also include; fund-raising; tree chipping for CW; Salvation Army kettle bell at Christmas for Ebbtide Rugby; worked with my mum as a team liaison officer with the NZ team for the Women’s Sevens; I completed my referee level 1 course in 2017. I was born in NZ where I was introduced to the game and I organized teams for the sevens season; coached and did refereeing, along with working for various fundraisers promoting Hamilton Girls High Rugby to help pay for trip to the Top 4 in NZ Tournament for XVs. (Ed. Here is a community-minded young lady!)

“Playing for CW helped me meet new people and build my courage with new friendships. I feel lucky to have the Canadian women come and run training sessions for our team. The CW coaches have been very good, pushing me to become the best version of myself.”

Her favourite memory was; “Playing semi-final for Top 4 in all of New Zealand High School rugby at FMG Stadium in New Zealand. My XVs team winning Top 4 in New Zealand in 2018 and also, playing at Thunderbird Stadium in the Club finals against Abbotsford this season.”

Jessica is going to UBC to study Sociology.  She has been recruited to play on their varsity team.

“I was very involved in my school rugby program and was constantly encouraging girls to try out the sport. I also ran lunchtime sessions for the newer players on the team.  These sessions allowed the girls to gain an understanding of the laws of rugby and how they can apply what they learn in practices to games.”

“I loved my time playing at CW. I got to meet some really awesome people who challenged me to do my best and made the game fun.  In addition to improving my skills, CW also helped me gain more confidence. I was encouraged to try new things and to take advantage of the opportunities I was given.  Also, as captain of the team for the 15’s season, I had a chance to improve my leadership skills. Although I didn’t play with CW for very long I feel that I will always be a part of the CW community.”

“My favorite CW memory is playing touch in practice.  We had a very successful season but I had the most fun with my teammates in practices.  Even though the scores didn’t matter in the long run, we would bring the competitive spirit to our touch games regardless of rain, wind or mud.  I loved that we could try new plays and just take the opportunity to have fun playing the game.”

“In the 2019-2020 season I volunteered as assistant coach for the U12/U14 CW girls team once a week.  I was also involved in the management of my high school’s team (SMUS) pre-season.  I contributed to team fundraising and lotteries.”

“The CW family made the Island feel like home.  I feel crazy lucky to have grown up surrounded by loving friends , parents who took me in as their own, and the CW coaches; who helped shape me into the person and player that I am today.”

“My favourite memory: the first practise of 15s season this year.  We played touch in the cold pouring rain and everyone was smiling.”

Kaitlin is going to the University of Calgary to study law and society.  She has been recruited to play on their varsity team.

“During my time at Claremont we were given the opportunity to go to our community and introduce rugby to elementary school kids.”

“Playing for ‘C-Dub’ has been the best experience I have met so many amazing teammates and have been given so many opportunities to grow as a player.”

“My favourite memory from C-Dub was during the bus ride to Kamloops during doing karaoke!”

Kira is going to UVic to study social sciences. She has been recruited to play on their varsity team.

"I have been coaching rugby since grade 9 for the middle school that I attended. I loved coaching so much and building the sport so I continued to carry that into the Abbotsford club and helped out with U14 whenever I could! I hope to keep coaching because it is definitely a passion of mine and I want to do everything I can to build rugby."

"I think my favourite part about playing for CW was the coaching. It was so awesome for me to learn in such a new way and see rugby through a whole different lens. I really do think that I took a lot out of playing for club and it helped skills such as my vision and leadership on the field and I know that it really improved my kicking!"

"My favourite memory from playing for CW was when we travelled to Nanaimo for a game, I think it might’ve been the last one that I was able to play, and we crushed it and I had a really good game and it was super fun!"

Kenzi is going to Camosun to earn her Professional Chef One certification. She hopes to play for the CW U19 team again, this coming September.

Kenzi was the Head girl at SMUS.  She told our reporter that another aspect of note is that her older brother is Luke (‘Mullet’) McCloskey (RC’s Men’s 7’s)!!

“I really enjoyed playing for CW!  Since I was new to the sport when I joined the club, it was so helpful in developing my skills and building my confidence on and off the field."

Chloe is going to UVic to study Recreation and Health Education.  She has been recruited to play on their varsity team.

Other items of note; “I refereed locally; helped out coaching U10 CW players; volunteered at the Vancouver 7s and the Langford 7s as a ball girl for the last couple of years; I run the CW Instagram and always promote CW rugby and girls rugby.”

"I have learned so many life skills through rugby and my time with CW. I love the confidence and strength it has given me.”

Danielle Leipoldt - Going to UVic to study general sciences.  She hopes to play on their Varsity team.


Lexi Whitehouse - Going to Camosun to study Criminal Justice. Hopes to play for the CW U19 team this coming September.