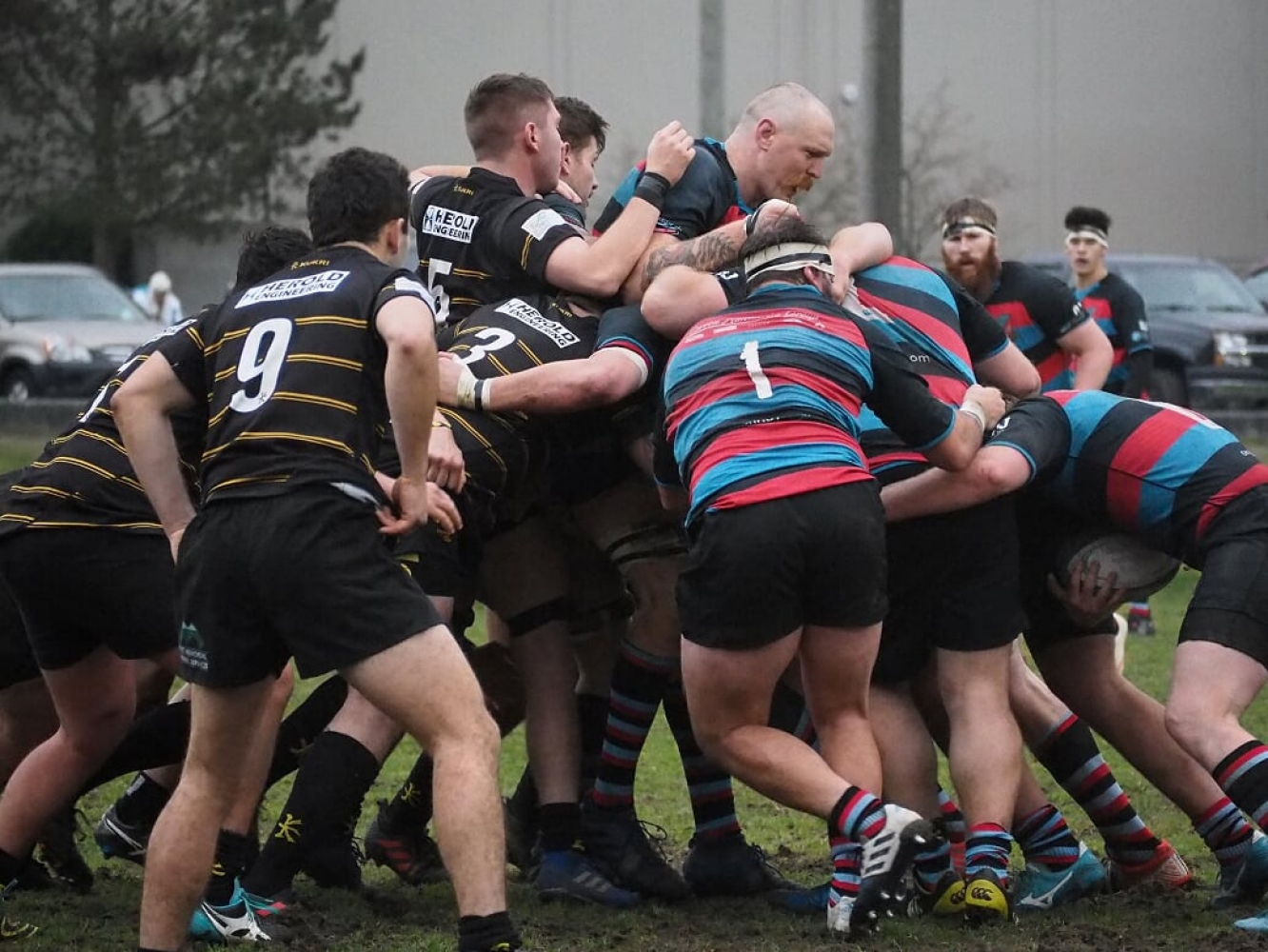 Chiz at the mine face.

Regardless of the weather, it was a good day for CW visiting the Hub City on Saturday. The venture opened with a men’s “Third Div.” exhibition between the two clubs. Despite being short of two full fifteen a-sides, the clubs mixed and matched players so that some 20 – 25 guys had a trot with the black and gold putting three or four more across the line. Tip of the cap to Daumer, Dave Hume and The Don for promoting this action.

The Women’s Premier followed with a lop-sided disparity in CW’s favour. The fall season has been very rewarding for the club with their hopes of growth by fielding two senior teams in the BCRU competition in the New Year. Well done, ladies. On this day, Emily Belchos led the scoring parade with a hat-trick and a brace was added by Danica Pedric. Missed the game but heard the goal-kicking department was spot on, adding some eight converts. Nanaimo was not left out of it, managing to cross the line for three or four. The fall season ends with CW having a 4 – 3 record. On this day, the ladies had departed Victoria at 7:30 a.m., faced a deferred kickoff time and stayed to support the men. I say, well done to this support. Enjoy your break, train hard and get after those Veloxians in the New Year!! Hats off to team manager, Chris Shepherd, job well done, keeping the cats in line.

CW was first to score in the Reserves, with Captain, Ollie Winser going over in the corner, missed by this reporter. Did arrive in time for Nanaimo’s almost immediate response, when after some good phases and shunts by some big units, the Hornets broke a tackle after a couple of thrusts at the line and it was all tied. Next came a text book try from the Visitors following a classic Kanty ‘diagonal’, nabbed by Boyd-Porter, converted by same and the boys never looked back. Next it was Isaac Olsen, looking very good for the club in his first season, Gus converted for a personal tally of nine points. Nanaimo gave it a good shot but they were repelled and the half ended at 19 -5.

The second stanza went to and fro for a long spell before the ball was quickly moved wide from a penalty, ending up in winger, King’s hands. He scooted some thirty meters for the try. Despite the surface beginning to get churned up, CW’s speedy set of backs was revelling in the conditions and when they moved the ball wide, they always looked to be a threat. Then #10, Kanty made a good break and from the ensuing ruck, Bailey dummied and sprinted 40 meters with a Boyd-Porter convert to close out CW’s scoring. The Hornets added a deserved five in the very late going for a final, 31 – 10. There were plenty who raised their hands in this one, ensuring the boys would not be bested. Men of the Match; Backs – Harrison King; Forwards – Quinn Horton; with the Player’s Hard Hat going to loosie, Orin Watkinson. This result leaves the boys slightly ahead of the middle in seventh spot. I still suspect the “second half” could have even more success. Thanks to ref, Pedrick, nice job.

To the ‘big game’. This one was only about seven minutes old when a classic play occurred with Pitblado using excellent vision, anticipation and skill to hit Hall out very wide with a massive spiral from his ‘wrong’ hand. Fergus took it on the burst, never slowed a stride and there was no stopping him – a thing of beauty! Then followed a long period of pretty even play and territory, with Nanaimo showing good resistance to CW’s questions but it was finally Devillers who was the recipient of wide ball again and a jink and twist and over the line, 12 – 0. CW’s forwards were revelling in the running action, Chiz sprung Sawyer for a near thing and were it not for a couple of handling errors, the dam may have broken. The next score was toward the end of the half after a massive fifty meter breakout by?? (Put it down to the dark!) Out from the melee burst one, Liam Chisholm for a most deserving tally and half-time lead, 17 – 0.

The reporter apologizes for missing a good portion of the early second stanza whilst catching up with two old team mates, circa 1969 over a libation, only to re-join the fray with no further blood drawn! About the mid-point after a couple of good thrusts by Balucci, Bradley, Ilnicki J., it was Nathan Stewart who ran an unstoppable line for the fourth and bonus point tally, 22 – 0. The bench was then emptied and the boys from the pine left their mark. Bradley who had toiled hard all day was rewarded in the dark, for his work, 29 – 0 and the sneaky Frenchman, Devillers, added his brace under guise of night, crawling under the tackle for a 34 – 0 final.

For The Tricolors, M-o-M Forwards – Chiz – deservedly so – what a special man over the past four matches, giving his all; M-o-M Backs – Sion Griffiths, celebrating his selection to the Canada U20 “Squad” and showing some of what could be very special potential. The boys gave their Hard Hat to Luke Bam Bam Bradley. His opposite man tried hard all day to keep him under wraps but it was not to be. Thanks to referee, Levchuk, nice job and to the Hornets for their usual warm post-game hospitality. This outing will leave the boys in mid-pack, seventh at the break and on the move. The past two games have been much more like it. Hats of to the halves, Pitsy and Fergus, the combo looked much better today and although McCarthy was quite, Ferguson lit some sparks. Devillers popped up enterprisingly in a few spots for a better outing. The pack was good and one could have tossed a blanket over them for their performance and rightfully so; Chiz standing out slightly ahead of a solid bunch of Hard Hats. This finish was cause for definite hopes for a push for the top four and one home game playoff chance. Well done all.

ADDENDUM:  A tip of The Ruggernut’s cap to Doug Tate and seven of our CW-types and the rest of the Vikes  -  National University Champs during a special week for UVic Athletics when they honoured the late, great, basketball icon, Eli Pasquale.  Pictured are our “CW Grads” Jonas Robinson, Nik Carson, Lockie Kratz, Carter White, Gavin Kratz and Ben Newhook.  Absent – Jarvis Dashkewytz, Ethan Hager?