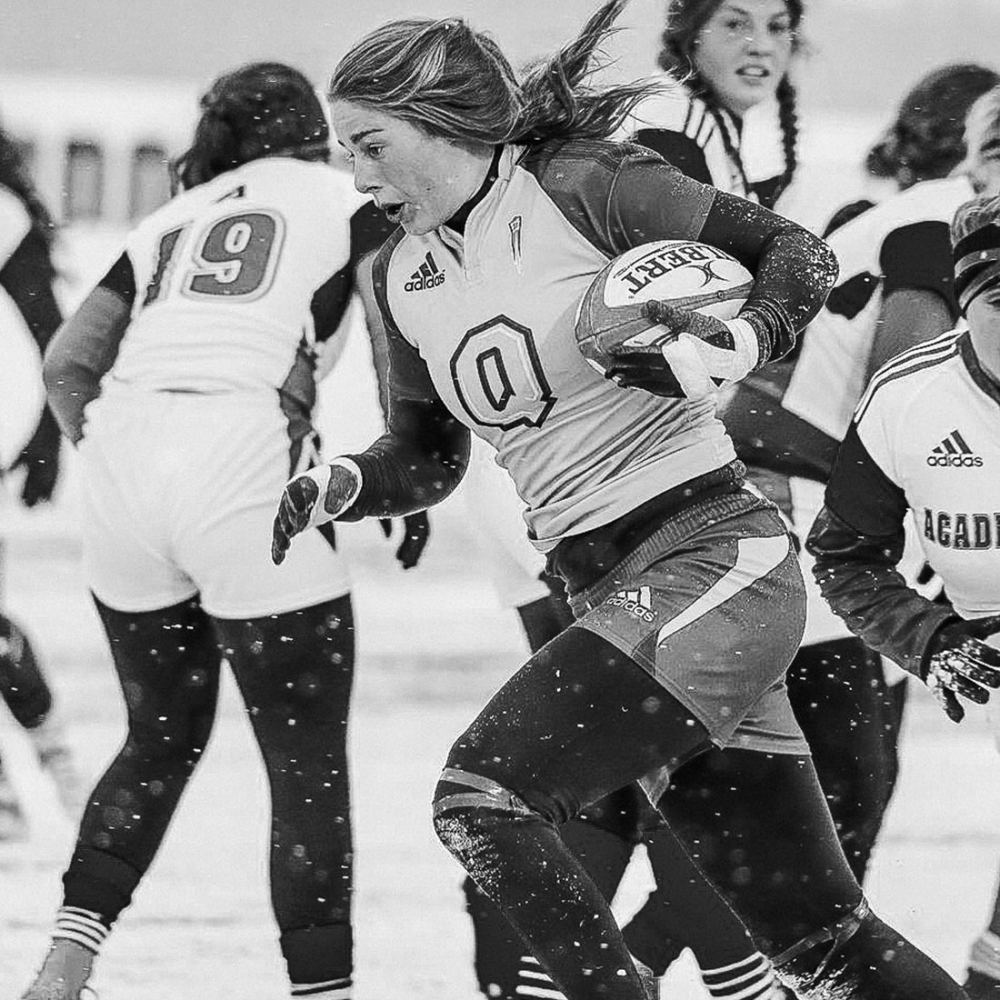 This Girl Was On Fire!

Sophie De Goede - a lady for all seasons, in action for Queens U Vs Acadia.

Canada’s U20 Women’s captain, Sophie De Goede (pictured above), led her team to a very close score-line (17 - 27), against England on Saturday in Halifax.  Sophie led the Tri-Nations tournament with six tries, scoring in every match.  This repeat match against England was close enough with the only difference being a fourth “penalty try” awarded to England.  This blog ( a lengthy story but a good rugby read), was discovered and it is with thanks to Aedelhard Rugby, we reprint it.  Sophie epitomizes the zealous enthusiasm of many of Canada’s young athletes. And we are proud that it all begin at Windsor Park. ‘onya, Soph.

At Queen’s University in Kingston, Ontario, where the education is renowned and the athletic history dates back to 1873, Sophie de Goede has a reputation.

“I don’t know if (other students) know what I’m doing, but they definitely know I’m the girl that runs into class sweating all the time with 30 seconds to spare.”

Admittedly, she's also a little underdressed for the occasion – at least in comparison to her classmates. As a commerce student at Queen’s, the classroom attire is equitable to a business work place. So when the rugby and basketball-playing star, who hails from Victoria, B.C., arrives in a t-shirt, shorts and flip flops, it’s noticeable. It’s also, perhaps a little enviable.

Few could do what de Goede, who is captaining Canada’s Under-20 side at the Tri-Nations Cup in Wolfville, Nova Scotia, does.  “I’m a master of the speed walk and the quick change,” she says.

Studying at one of Canada’s most prestigious academic universities, de Goede is not only taking on nearly a full load of business courses – she is the school’s only dual-sport varsity athlete, competing in both rugby and basketball.  Sitting in her rugby locker room at Queen’s, the five-foot-nine de Goede, once fly half turned No. 8 (who also has the ability to slot in at flanker or lock), takes a moment away from it all to answer a few questions.

Born into a legendary rugby lineage – her dad, Hans de Goede captained Canada at the World Cup and her mom, Stephanie White, was the first-ever captain for a Canadian women’s side – Sophie has been everything one might have imagined.

In 2016, de Goede, who grew up playing club rugby with Castaway Wanderers in Victoria, was named Rugby Canada’s Young Female Player of the Year. She followed that up by joining Canada’s national sevens side to train with the best sevens players in the country during the 2016-17 season. After graduating from Oak Bay High School, she put together a first-year rugby season at Queen’s that garnered her U SPORTS Rookie of the Year honours and instantly put her into the upper echelon of No. 8 players in the country.  All that before she's 20 years old.

Her university success set up a chance to play with BC’s senior women’s team as one of the youngest players on the roster before getting the call to captain the U20 team.

“Sophie is the epitome of an athlete,” says Canada U20 coach Jack Hanratty. “She is a natural athlete. She attacks every kickoff and goes after every single ball – and her work rate is incredible.”

In Canada’s opening game against the USA at the Tri-Nations Cup, de Goede arrived exactly as advertised, tallying a whopping four tries to lead Canada to a convincing 36-12 victory.  “She’s one of the most driven people I have ever met,” mom White says.

While clearly evident in Tuesday’s victory, de Goede’s ever-strengthening relationship with rugby also goes more than a few years back. There is no official record, but it doesn’t seem far-fetched to believe de Goede was born with a rugby ball in her hands. Or at least, it wasn’t long after.  Growing up, it wasn’t sitcoms or reality TV that lit up the de Goede television, but rather – perhaps, not surprisingly – it was rugby. And de Goede was right in the mix with her two older brothers, firing opinions and expressing tactical suggestions to the far-flung players beaming into their Vancouver Island home.  So, by the time she was with her family in France watching the 2007 Rugby World Cup and then in New Zealand for the 2011 Rugby World Cup, she was long-engrossed with the sport and enveloped in the community.

“Her passion for Canadian rugby is inspiring,” Hanratty says. “She comes from an incredible background of people who have not only played for Canada, but given back to the rugby community as much as possible. She is really a testament to them both.”

She was going to leave for Wolfville the following morning to join her Canadian teammates, but instead she’ll have to take off in the evening because she has a final exam in microeconomics in the afternoon. In the summer months – you know…when most students take a break from the books – de Goede is taking two courses while also juggling competing with BC’s senior women’s team at the Canadian Rugby Championships, and her current role with the U20 group.

She considers this her down time and it’s true. By the time she begins her second year at Queen’s, she will have played a full season of both rugby and basketball, represented her province and country on the pitch, all while remaining on pace – she’s actually one course ahead of pace – to graduate in four years.

“(My parents) truly believed that I could be a great athlete and not drop my level and still be able to get a degree,” de Goede says. “That’s why I chose to come (to Queen’s). It was the toughest decision I have ever made, but I’m happy I made it. It’s manageable. It sounds daunting, but if you enjoy it, I think anyone can do it.”

Judging by the inflection in her voice and the quick-to-laugh persona, you’d never know de Goede had an exam set for the next day and national team duty on the horizon. For her, it’s all fun – the school, the rugby, the basketball, and the business.

“Because I have such a good time doing all this stuff, it doesn’t feel like a chore,” she says. “Obviously there are days when it’s hard to get up in the morning and you just want to lay in bed. But it’s definitely worth it in the long run.”

In her first year with Queen’s, the hard-running leader of the pack, who has fly half-like touch, led the Gaels in points, with 34, and tied for the team lead in tries with four.  Yet, she’s the type of player and person who isn’t satisfied. Sure, Queens earned a silver medal at last year’s OUA (Ontario University Athletics) championship, but it wasn’t gold. Sure, it was a great experience playing senior rugby with BC at the Canadian Rugby Championship, but three losses from four outings was far from the desired result.

“I’m a pretty competitive person,” says de Goede, who also averaged 9.9 points and 7.0 rebounds per game in a rookie campaign on the Queen’s hardcourt. “Losing that much isn’t a great outcome. I’m always thinking ‘where can I go from here? How can I be more impactful?’ I want to be as great of a leader as possible.”

I ask the expert (Mom) the burning question: After all these years, how would you describe Sophie on the pitch? White takes a moment to answer.   “Tenacious.”  She pauses for a moment longer.  “She likes to go. She likes to carry the ball. And she likes to run over people.”

If there’s one person who gets Sophie, it’s her mom. And few would disagree.  Indeed, Sophie has a reputation.  “Yeah…tenacious. That’s a good word.”

RWC 2019.  Congrats to Namibia, earning the penultimate spot for RWC with their victory over Kenya.  Canada will face Germany, Hong Kong and Kenya in the round-robin contest for the final spot in the Big Dance.  Winner faces N.Z. and did you happen to catch them on the weekend?  Combined World All Stars could not beat the Kiwis!

Talk of the town - Canada U20 Men – Pick ‘em – Ben Newhook, Lockie Kratz Schellie, Nick Carson, Josiah Morrah, grads Gavin Kratz and Brennig “You can run but you can’t hide” Prevost.  All CW buddies.  The U20’s laid a licking on a B.C. U23 Selects on Sunday, 81 – 21 and the selection for Bucharest, first up, Portugal at the JWRT has now been announced.  CW congratulates lads who have come up through the pathway via The Tricolors, from minis to Nationals - Lachlan Kratz, Brandon Schellenberger and UVic's, Gavin Kratz, Brenning Prevost as well as Josiah Morra (Toronto via CW).  Best of luck to Jeff Williams, and Robo and all the team.