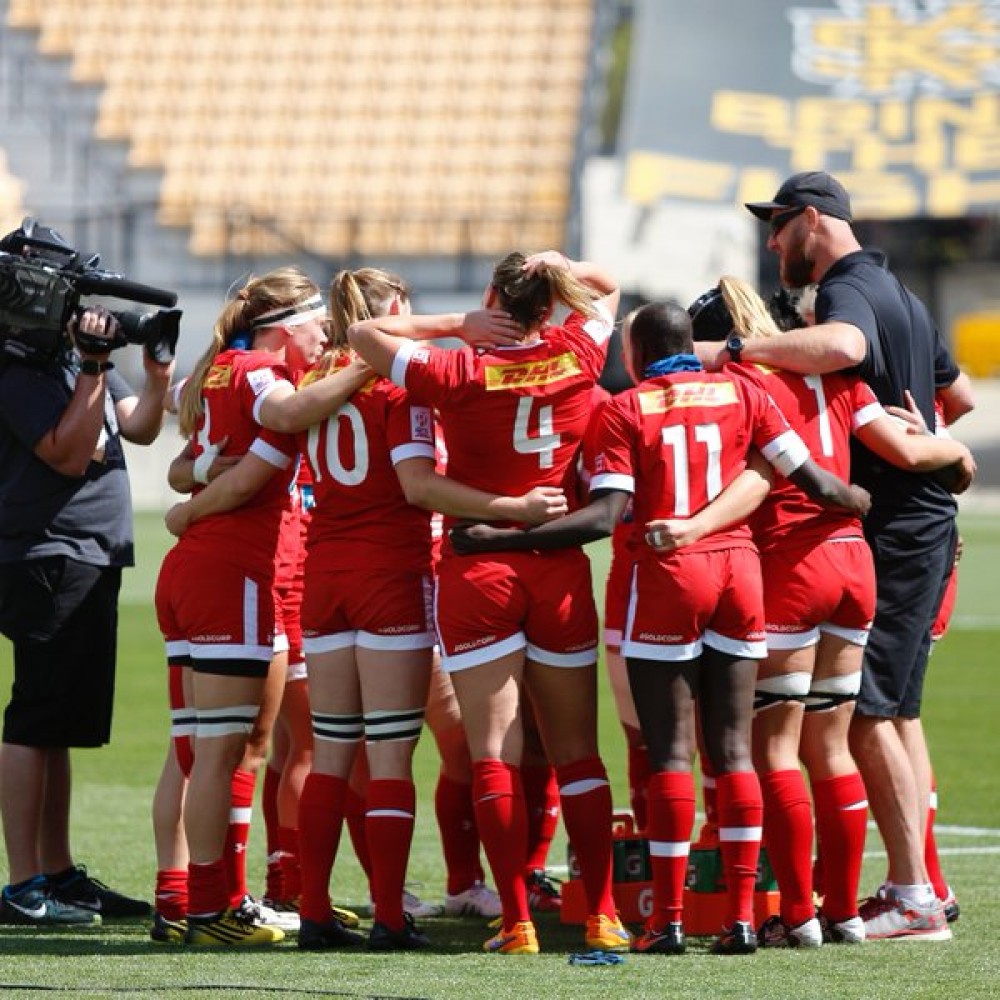 Canada Men’s and Women’s Sevens programs received a definite come-uppance over the weekend. The Women who started with great élan winning four in a row, all of a sudden came up against eventual winners, Australia. At the moment, the Aussies are a cut above the rest. The team then moved into the play-off spot for third place and were “doubled up” by an improving England squad. The ladies will get a chance for revenge in pool play at a sold out Langford venue this coming weekend when they face England again.

Head coach John Tait said: “Definitely frustrated. We had too many unforced errors and defensive breakdowns today. The Aussies and English both played as we thought they would pattern-wise and we just didn't maintain enough possession to beat either. We definitely felt like we could win this tournament after day one, but when you give up leads early to quality sides you need some bounces to go your way and you have to keep possession. We didn't get either. We will refocus and look forward to competing at home next week.”

The Men started like a train on fire, being stiffed by a very poor exhibition of refereeing against Fiji, a game which should have gone their way, hands down. However, things just slid downhill after this, losing once again to Wales on day #1. Day #2 saw much of the same – a loss to Samoa, interspersed with a victory over lowly Portugal being the only glimmer of success. Things culminated with a final loss to Russia and just two points earned after the six matches. There is a certain irony in that, England who picked up 13 points, only managed a tie against Russia! So, there always appears to be hope.

This must have been bitterly disappointing for the men and although Coach Middleton espouses just how close the men are, the results have not really been showing that (let’s take away the “home” success in Vancouver). The Men remain in 13th place with the gap between teams they were ahead of last season, France, Wales and Samoa, ever widening. It certainly gets no easier in Singapore, in a Pool with U.S., N.Z., and France …… the results of this outing. The top five still seem to be creating a distance from the field, although U.S. defeated Australia and Wales.

Sophie and Shaye earn their colors!

It was predicted here that the girls would have learned from the test loss to the full England side last weekend and so it came to pass when they played the Development team, losing, 12 – 17 in a much improved effort. CW’s Shaye Tudor joined #8, Sophie De Goede in the side this week. Well done, ladies!

On the Home Front
In the words of the legendary, Peter Kilshaw, “It is a great day at Windsor Park!”  Thanks Peter for another season of volunteer service.  It was a great day everywhere except on the scoreboard! Bookended by the two photos in this blog there was action aplenty in the three games.

Events started with the visiting Westshore women, current B.C. Premier Champs, seeking to prove their recent form is no fluke.  When the dust had settled, CW had drawn ever closer to the “W VV” however the point’s differential was still ten, 27 – 17. To our women, the only club team left standing, we are all behind you for the Playoffs – one game at a time. This game saw both teams play entertaining rugby, throwing the ball around, with some opportunities for the Home team to get ahead however there were some defensive lapses, again something to take away from the game. The standard of play amongst the top women’s teams is something special.  Well done, Ceedub.

A tough act to follow for The Ones against a strong Braves team.  UBC had an insurmountable lead by the half.  The Sage reports that the boys stayed the course as best they could against a quality, well-organised opposition.  Neil Fowler and Ty Stoochnoff were the try scorers with the final being 47 – 12 for The Visitors.

CW held out against The Birds for a long time, being close at the half, 15 – 19 and earning a bonus point for four tallies.  The Birds’ fitness and pace of the three-quarters and counter of the back three was simply too much as they notched seven tries.  The Thunderbird pack was solid and created the platform for the win.  For CW, The Sage reports Dougie Fraser’s tally was magic and earned him the vote of backs M-0-M whilst Burger Thornber, once again received the nod for the forwards.  Week in and week out, Clay has given good performances this season and his size and pace from the #2 spot are worthy of attention.  For the Thunderbird, fullback, Andrew Coe stood out. Final comment; “This squad and coaches deserve full credit for their undefeated season”.  Hats off!

Thank you to all of the officials on the day and to the many fans who attended our last two Home games. Another reminder to come out and support the Women in their home field Playoff match. Finally, to our sponsors and 20/20 Club Members, a massive thanks.  It does not become any cheaper to run the club. There have been many successes – Provincial Championships at the U14 and U18 Boys level and Women in the Playoffs in their inaugural season. To all of our coaches, managers and trainers – thanks from the Club’s Executive and to the players, there is something to build on in September but it will be back to square #1, having to qualify for Premier play.