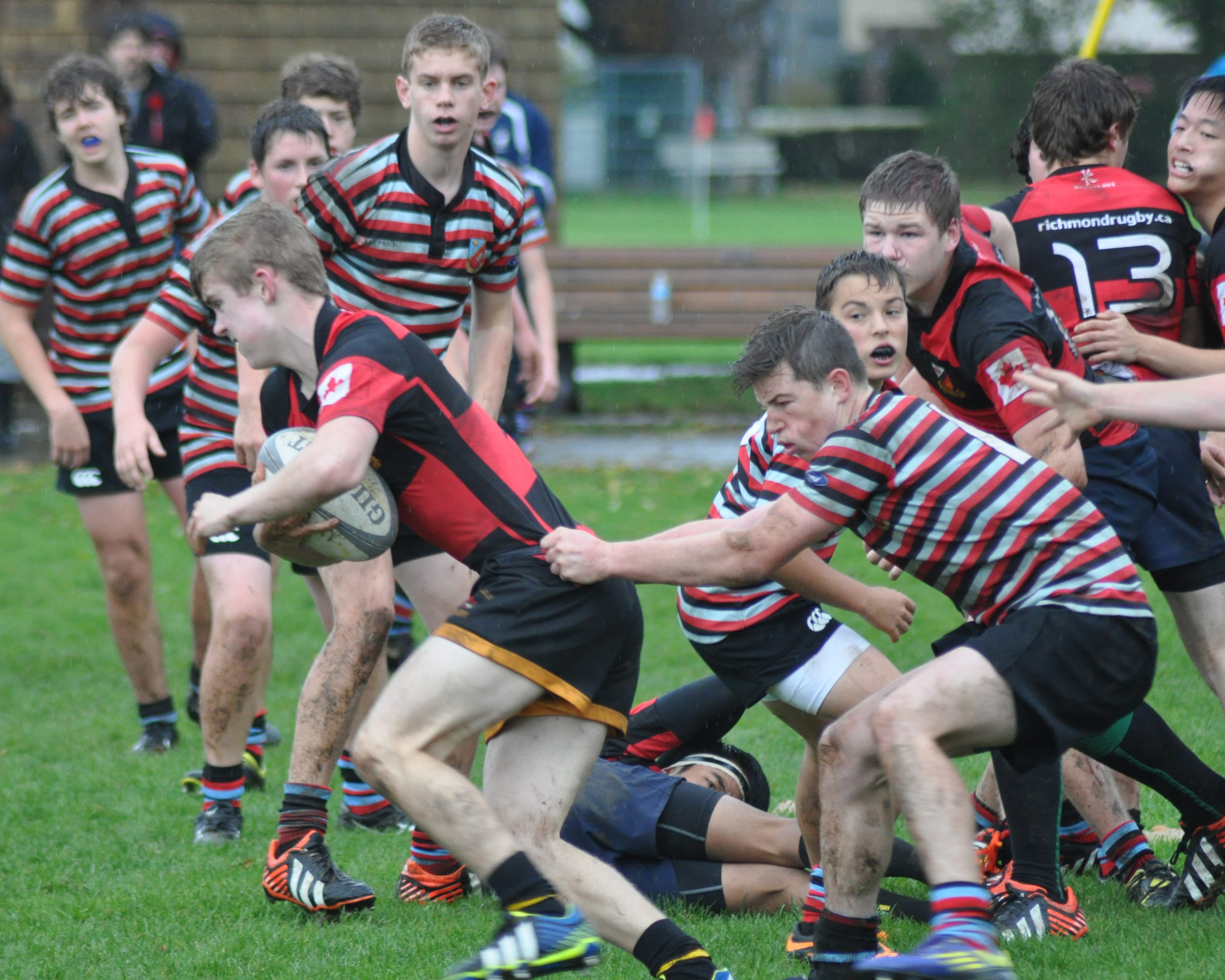 A rainy Sunday saw a full slate of junior games at Windsor. Minis were on deck in full flight, despite being “clocks back”, followed by U14’s playing an inter-club match against Velox. An interesting observation regarding numbers is the fact that attrition seems to occur, mostly between minis and juniors and after high school/U18 to “senior” rugby. However, the clubs and coaches modify and accommodate and on this day three teams were mustered for round-robin play. The club owes all our junior coaches a ton of gratitude and at this level, Shane Muldrew is showing the way, providing interesting practises and keeping the lads motivated.

As the rain settled in, the U16’s took the field against Richmond. CW had suffered a rather lop-sided loss last weekend at Capilanos and were looking to get back on track. Richmond had a good contingent of twenty five or so lads, the forwards being composed of some rather big units and although CW opened well, it soon became apparent that this would be a hard fought contest. CW led 7 – 0 at the half with some good attacking rugby on show, the passing being a feature. Richmond took to the field with a measure of purpose and some hard running from a big center tested the locals’ defence. The play ebbed back and forth with both teams scoring a converted try in the half. The hosts had a slight edge, coming close on two other occasions. CW 14 – Richmond 7, in a well-played game. The boys cleaned up and met for a hot bowl of chilli, post-game. Thanks to ref, John De Goede, who facilitated play very well as the lads continue to learn the nuances of the game. Hats off to Luke Kratz who leads a group of coaches. By season’s end, this team will have crossed the pond six times for matches. The club congratulates, the players, management and supportive parents.

Final contest of the day was at the U18 level and Cowichan was the visiting team. Competition at this age grade has been organised on a Pool basis and scores will be a determining factor for cross-over playoffs. The CW lads had suffered a close loss last weekend to Capilanos, in a match that was described by a very knowledgeable rugby type as; “probably the best he had ever seen at this level.” Watching the U18’s go through their paces yesterday, it was not hard to imagine why this might have been so. The match was one-sided but hats off to the ‘Piggies’ who hung in for the full sixty, scoring a well-earned try late in the match. CW used the ball with skill under the slick conditions, always deferring the pass to the man in space and although, again perhaps being the smaller pack, tackled with vigour and prevented the greens from getting up any head of steam. The CW backs were a cut above their opposition, moving the ball through the hands with accuracy and supporting the runner, constantly probing for gaps. There are still a few games left before the playoff picture becomes unravelled but one can suspect these lads will certainly be knocking at the door. Thanks to the young man who refereed this game, also handled well, facilitating the players and catching nearly all that occurred in some pretty fast and furious action.

Saturday, saw a cobbled team giving off a tenuous vibe on the bus, off to do battle against Burnaby Lake with their reputation of big units, aggressive play, ability to score across fifteen positions against our squad of mixed experience and age at the Premier level. Added to this was the fact that the club had to default the Division One match due to a number of factors, weighing heavily on everyone. However, led by Sam Rocher, the edge was taken off the situation and the boys readied themselves for the coming encounter.

At the end of the day a 17 – 36 score line was a measure of the group’s work. Although Panga and Bontus were selected as MoM by Burnaby, these players would defer their recognition to the team, especially the five lads who gave up their day, not knowing if they would even get any playing time. It may be unfair to single out any one player, such as already mentioned however we got wind of a special effort from prop, Matt Lemay. Matt returning from a layoff and possibly short of a trot was taking a deal of attention in the sets, yet at the half declared to the coach to leave him in, recognising his experience perhaps outweighed the bench and he soldiered on. This typified the effort.

As for the game, the first half saw CW with little possession nor position, with the Burnaby pack basically, having their way. The fact that CW kept the score to three first half tries was a credit to their effort and pride. No points posted was probably a fair reflection of the opportunities afforded the visitors in the first half.

Burnaby opened the second stanza with a Dolesau “special”, deking his way to a gap and fending off would be defenders, the Lakers went to 24 – 0. Some might argue the pedal was taken off but good teams don’t do that. CW made a foray into opposition territory and Braddock declined a rather easy pot at goal and opted for touch and the lineout. Possession was gained and recycled for Keenan Horton to score out wide. Burnaby replied almost immediately with #8, Cejvanovic, who was dangerous all day, scoring under the posts, 31 – 5 at the mid-point of the half. When BL had a player carded for repeated infringements at the breakdown, CW was rewarded for what had been sustained pressure and tries were scored by Horton and Rocher. Burnaby finished the affair with a late tally.

Although the side was unhappy with the loss, the second half battle was to be appropriately celebrated and the return trip was lightened by the talents of Ilnicki and “Sunshine” Elliot, a newbie who will obviously add to the club fabric this season. A CW “thanks” to officials and congratulations to Burnaby on a solid win and thanks for the hosting and post-game camaraderie. Rowers, a reinvigorated club, visit Windsor next Saturday.