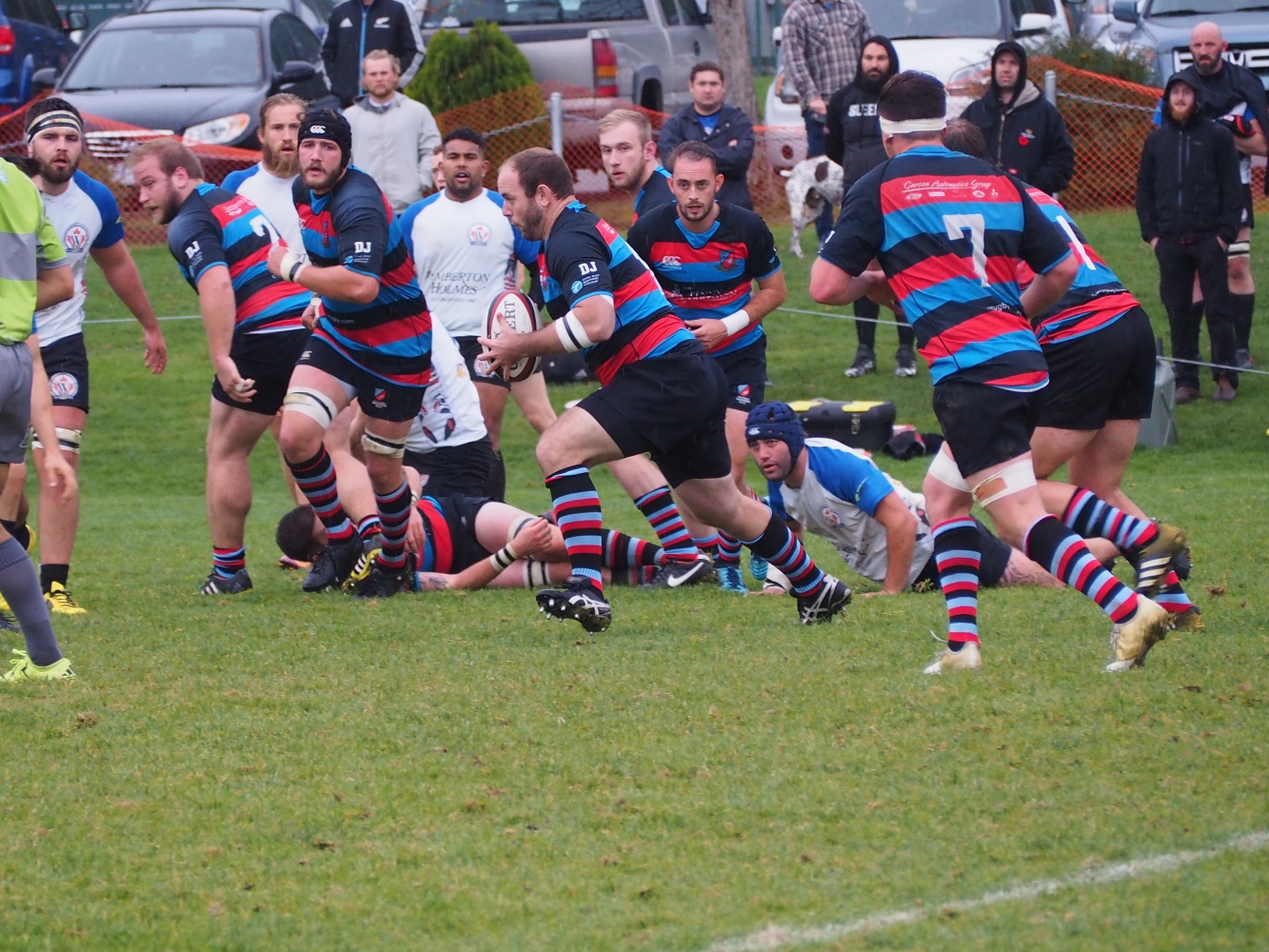 Today’s game recap is provided in length given the fact that very few CW fans seemed to (disappointingly), make the trek to the western suburbs.  Deservedly, you missed a cracker – for the second week in a row!  Much of what was predicted by this scribe on Friday came to pass in a classic “local derby” on Saturday.  In the season’s “toughest” match to date for CW, a win was eked out in “injury time”, 40 – 37.  There was little love lost between the sides as they battled hard from the opening whistle and the track meet was not decided until the final play of the game.

The match started with two decisive CW lineout drives following penalties and the formula was successful again this week, when Braddock drove hard off the second for “first blood”, 7 – 0.  Westshore responded immediately when the re-start was left unclaimed and a very active Cole Mosychuk gobbled it up and after a mere two recycles, he found himself deservedly, over the line, 7 – 5.  CW appeared stunned.  From the re-start Stewart claimed a loose ball and started some pressure only to give up a pair of penalties, enabling #10, Jones to gain ground with a mammoth punt deep in CW’s “22”.  A further penalty occurred, putting “go-ahead” points on the board, 8 – 7, Westshore. Staller showed his talent early and when Ngawati “tackled” Finnemore, feelings from both sides came to the fore with some “handbags” and plenty of chirping. The Valhallians were very active with aggression from Mosychuk and Vaa, asking questions with attack, varying directions and eventually creating another penalty.  Although CW shunted the resultant scrum, Vaa somehow managed the pick-up, made ground and quick ball came to Staller who was unstoppable, making it look easy for the  15 – 7 lead.

CW was having some issues and was definitely on the “back foot”.  Despite this, it was Adibe, away on a pacy, weaving break of some fifty meters, only to incur a debatable, by some vocal partisans, penalty.  Westshore responded with some willing runners taking up the attack.  CW repelled and appeared to regain formation although play became error-ridden as both sides sought physical domination.  Around 35 minutes, Bradley alertly snapped up ruck ball and spotted a massive undefended gap, going some 30 meters and it was 15 – 14.  CW came back on attack but could not break the defensive line and the pressure produced passes which failed to find their mark.  Aided by two penalties, the attacking pressure reversed to the hosts and in fact, they produced ball from a tight-head scrum, with Vaa breaking from #8 for a 22 – 14 lead.  Plenty happened in the last 5/6 minutes!  CW pressure caused a miffed clearance which looked promising until the ball was knocked on.  Both clubs had another turn of possession and the half ended, disappointingly for CW with yet, another knock on.  The half had produced five tries, tense action and plenty of spirit with Valhalla’s Staller, being particularly outstanding.

The second stanza started as the first finished – CW dropped ball!  Westshore was denying CW time and with CW’s pattern to up the pace and move ball wide, the runners were so flat they could not effectively get to the pass which was intended to “lead” them on attack.  (You can’t take the coach out of The Ruggernut!)  Westshore was organized and enthused and their solid tackling was also a causal factor for disruption.  Despite this, somehow, the mercurial Schellie, now at #15, shimmied out of a tackle, made ground and waited until the last possible second to slip it to Hall who was away on this thing of beauty.  He was frantically snagged from behind and Finnemore got his mitts on it and fed Braddock for his brace and 22 – 21 score, the half being a mere five minutes old.  From the re-start another CW “bullet” pass was mishandled and Ngawati was on hand to go 30 meters untouched for the easiest of tallies, 29 – 21.  Following this re-start, the ball was moved quickly to Bradley who backed himself and was away on a 40m., break, feeding Pitblado and Hall again obliging with the honors, 29 – 28.

The tension of the affair finally broke out in an inevitable argie-bargie and further challenges for referee Schwalger.  From his adjudication, Jones slotted his second penalty, 32 – 28.  At this stage CW visibly stiffened and there were a good series of attacks from side to side.  Hall almost “ghosted” through but it was left to the “diminutive one”, Schellie to super-humanly reach over for the score and the lead, 33 – 32.  Westshore won a clean lineout, a phase which both teams hotly contested all day and Jones deftly “popped” to Staller on a great line and 40m of hard yards ahead.  Four broken tackles later, his brace, and the lead had been regained, 37 – 33 with around nine minutes on the clock.  A further fracas ensued, all settled calmly and something occurred that seemed to gel CW’s tight forwards and they ground their way downfield as time ticked on.  Schellie, doing all in his powers to will his mates on, broke away from one of these plays, CW drives were hard and patient, repelled by a desperate defense.  On a Sawyer drive, CW was “held up” – scrum – knock on – scrum won by Westshore, recycles needed and the game was won.  However, good teams “find a way” and Finnemore and Braddock crashed a counter-ruck, ball was thrown desperately wide to Logan, no show however, two more rucks saw the ball in Finnemore’s hands  and he obliged with the tally, Hall converting (5/6 on the day), for the final, 40 – 37 victory and bitter pill for their efforts for the hosts.  Heaps of respect as the teams trudged off the field having given their all.  Either team could have won as the ongoing score line has described, overall, they were that even on this day.

Best player on the field in my book was Brock Staller.  Just how he is not off to Europe seems a wonder to me, based on this and a few other performances.  McDowell had this group of Westshore boys primed and well-prepared.  I give the Battle of the FRF, despite one tight-head blip, to CW.  Finnemore was the pick of the six locks that saw time and debatably, one of his finest efforts since joining the club.  I must give the runner-up nod to Velox’s, Inglis.  The Battle of the Backrows was epic, Vaa living up to the hype given on this site with an “early” departure being a little surprising and he joined Mosychuk who was a lively customer on the day.  It was the CW back three that just seemed somewhat more visible to me – Bradley’s three long break-outs, Stewart’s leadership and Dawe’s work on the deck being the more complimentary of the two sets.  The halves – Schellie and Pitblado had the better of their opponent’s with Brandon earning both the players’ Hard Hat and the opposition’s M-o-M.  I thought Westshore’s #10, Jones had a very good game.  Staller was the pick of the centers and all thirty on the pitch but I have to admit Hall is showing to be sneaky smooth and a tough customer for his apparent slight build.  Ngawati has all the tools, including “edge” which I might suggest seems to change his focus on the pattern on occasion.  Of all of those who played “back three”, I give Adibe my nod.

Thanks to the officiating trio with particular plaudits to the M-i-M, newcomer, Brad Schwalger who handled a testy affair with understanding and accuracy within the law.  Both teams now lose players to the Pros but Westshore’s potential starters, if they can muster a similar group, will cause fits for most teams.  For CW, despite being rattled for a portion of the game, they showed poise and patience, particularly as witnessed with how they put the result to bed.  For me, Schellie was amazing, Finnemore (Voted M-o-M by the opposition), Braddock, Bradley and Stewart in the pack, along with Woolridge and Pitblado off the bench were all very visible.  Next week the boys get another (deserved) bye and will follow that with a Friday Nite Lite Vs Vikes.

Other activity on the day saw plenty of tries scored and much enjoyment with the home club winning both encounters.  Go, CW!