It Being The Sabbath 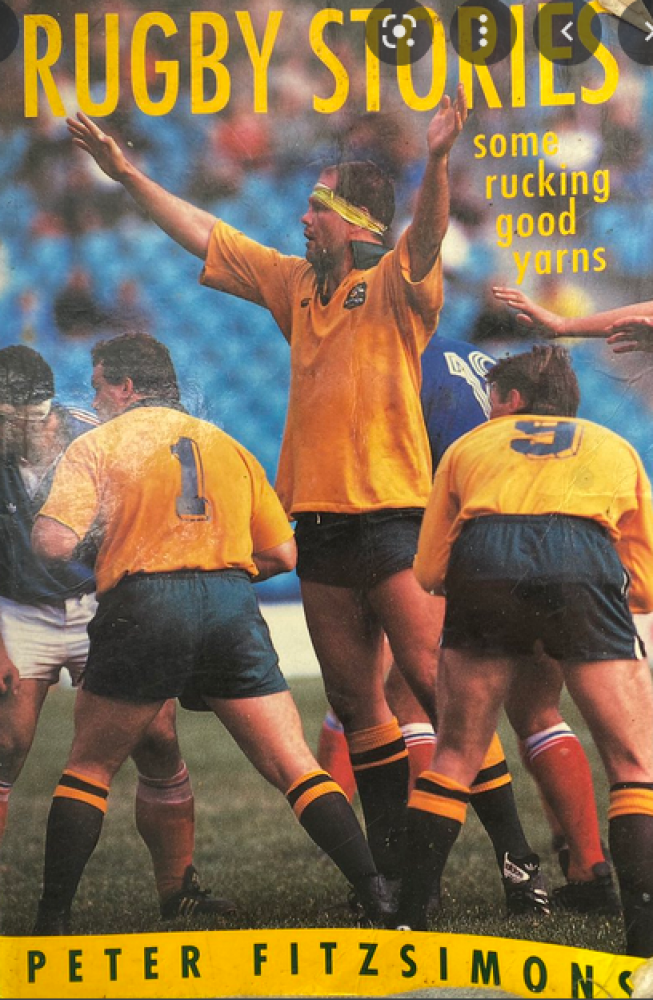 With no sacrilege intended to shame, this is a rollicking good rugby read.  Today’s read comes with due credit to the Sydney Morning Herald.  The author, Peter Fitzsimmons, is a past Wallaby, turned Journo.  Fitzy, as a player, never shirked from the battle and has a waggish sense of humor.

The story does require a prologue to better understand the content.  In sequential order; “Rabbitohs” – the nickname for South Sydney/Souths, a Sydney rugby league team with great heritage and history.  “Manly” – another Sydney League club and renown oceanside suburb and beach. “Five eight” – the rugby league equivalent of a union, standoff.  “League” – the 13-man professional version of rugby (union), probably the most followed football code in Australia, played predominantly on the east coast.  “Wally Lewis” – a much revered rugby league player who played schoolboy rugby (union) for Australia and had a lengthy and much vaunted league career.  Amen.

It started with a letter to the editor of the Herald, on Monday.

Derrick Mason of Boorowa had a go at the leadership of the Sydney Anglicans, saying it seemed to him that if you were to be faithful to their creed, “you must regard women as second-class citizens, demonize people who are different, including gay and lesbian people and those of other religions, and believe that the Bible is literally true”.

He was just warming up.

“No wonder people are choosing not to belong. If Jesus were to return, he might not only give the Rabbitohs a hand by playing on the wing, but he might also give some of his so-called adherents a lesson in compassion and understanding.”

The Herald readership loved it, less for the smack to the Anglicans than the idea of what Jesus might do in the world of football, if the Second Coming indeed occurs.

Lance Rainey of Rushforth recalled that apocryphal church noticeboard which long ago asked: “What would you do if Jesus came to Manly?” to which someone had penned beneath: “Move Fulton out to five-eighth and give him a run at halfback.”

Peter Gibson of Winmalee poo-pooed the idea of the Lord as a Rabbitohs winger, opining, “I don’t think Jesus has enough tattoos to get a run”.

For his part, Pasquale Vartuli of Wahroonga noted, “Jesus might give the Rabbitohs a hand by playing on the wing?” But it would take more than that to resurrect the mighty Rabbitohs. Besides, there is a coaching position open for Him at Canterbury Bankstown. God knows, we need a miracle!”

All good fun, yes? No doubt there’s a few knotted knickers and undies out there about taking the Lord’s name in vain – which presupposes he had no sense of humor – but when it comes to the possible positions of religious figures in football teams, you have come to the right place. I have written a lot on the subject over the years, and one of the letter writers even credits me with establishing that Christ once played fullback for Jerusalem.

These days, however, I’d bring him into the position of Wallaby five-eighth and wouldn’t waste him at Souths – as at least with the Wobblies he’d be playing on a genuinely global stage. (And you’re right, I’d also make Jesus team physio and after-match caterer, healing the grievously injured and feeding an entire stadium with just a couple of loaves and fishes. His capacity to turn entire reservoirs of water into wine would help on both fronts.)

Souths? They can have Judas, out on the hard-nutter right wing. He’s fast. He’s hard. He’s angular. He’s a nippy little bastard who you can’t pin down. His signature on the contract would be worth nothing, of course, but in league that is hardly anything new?

For the all-over Religious Figures XV, Pontius Pilate must hold down the loosehead prop position, on his imperious nature alone. And the fabulous Buddha as tight-head prop needs no debate. Talk about physical and moral gravitas at the heart of the pack!

For hooker, I’d love one of those wonderful Hindu gods, with several extra limbs which will always come in useful.

The Good Samaritan? He must be in the second row. He’s selfless. Generous of spirit. In it for the team. He’d be the constant glue to bring the side together, always making sure that the leper out on the other wing would not be left out of team singalongs.

I also fancy the Good Samaritan would also help keep the peace between our flying flankers, Cain and Abel? Sam’s second-row partner must be the mighty Mohammed who, beyond everything else, will make the turn-stiles swing!

Joseph, playing in his coat of many colors is our No.8. All teams need at least one team member who is a bit out there, and Joseph is our man.

Halfback can be Athena, the Greek Goddess of Wisdom and War, the link-woman to beat them all who will of course be useful across the park.

Moses? I know it. You know it. He is our inside centre, steaming up the middle and parting the opposition defense like the Red Sea. Think of the combination Jesus could form as five-eighth with Moses just outside him! The great things they could achieve! At outside centre, I’ve got Wally Lewis, which is where he sometimes appeared for the 1977 Australian Schoolboys side when Mark Ella and Michael Hawker had fly-half and inside-centre positions filled. Wally is a GOD, and just has to be there.

At fullback, there is no debate. It is the great Norse god, Thor. He’s fast, he’s furious, he’d be fabulous under the high-ball and an absolute demon in both attack and defense.

But it still leaves us with the issue of who should captain the team? Not Jesus. Yes, he would be a tremendous leader by example, but haranguing the team under the goal posts, exhorting them to go harder? It’s just not him. He did have some rants in him – kicking the moneylenders out of the temple springs to mind – but as I remember it from Sunday School it was generally not in his nature.

After-match homilies were clearly a personal specialty and team-mates could remember his speeches word-for-word as much as 80 years later, when they were first written down. And with his all-up humility, I just don’t think he’d want to run out at the head of the team.

The greybeard Moses could possibly be the better go, and he could certainly drill into the side the Ten Commandments of Winning Football.

But, on reflection, it’s probably best to go with Wally Lewis as skipper. When the chips are down against the team from those dark satanic mills, Wally will find a way to win!

It has been ever thus. It will be ever thus. So, verily it is written.

This blogger concludes with; what a weekend it must have been to be Irish!  Firstly, there was the monumental and encompassing victory over the All Blacks to win the series on NZ soil. No doubt, worthy of a celebration of mammoth proportions, only to face the hangover today of an enthralling British Open where Rory was “outputted” in capitulating to Aussie, Cam Smith.  That’s sports for you fans.