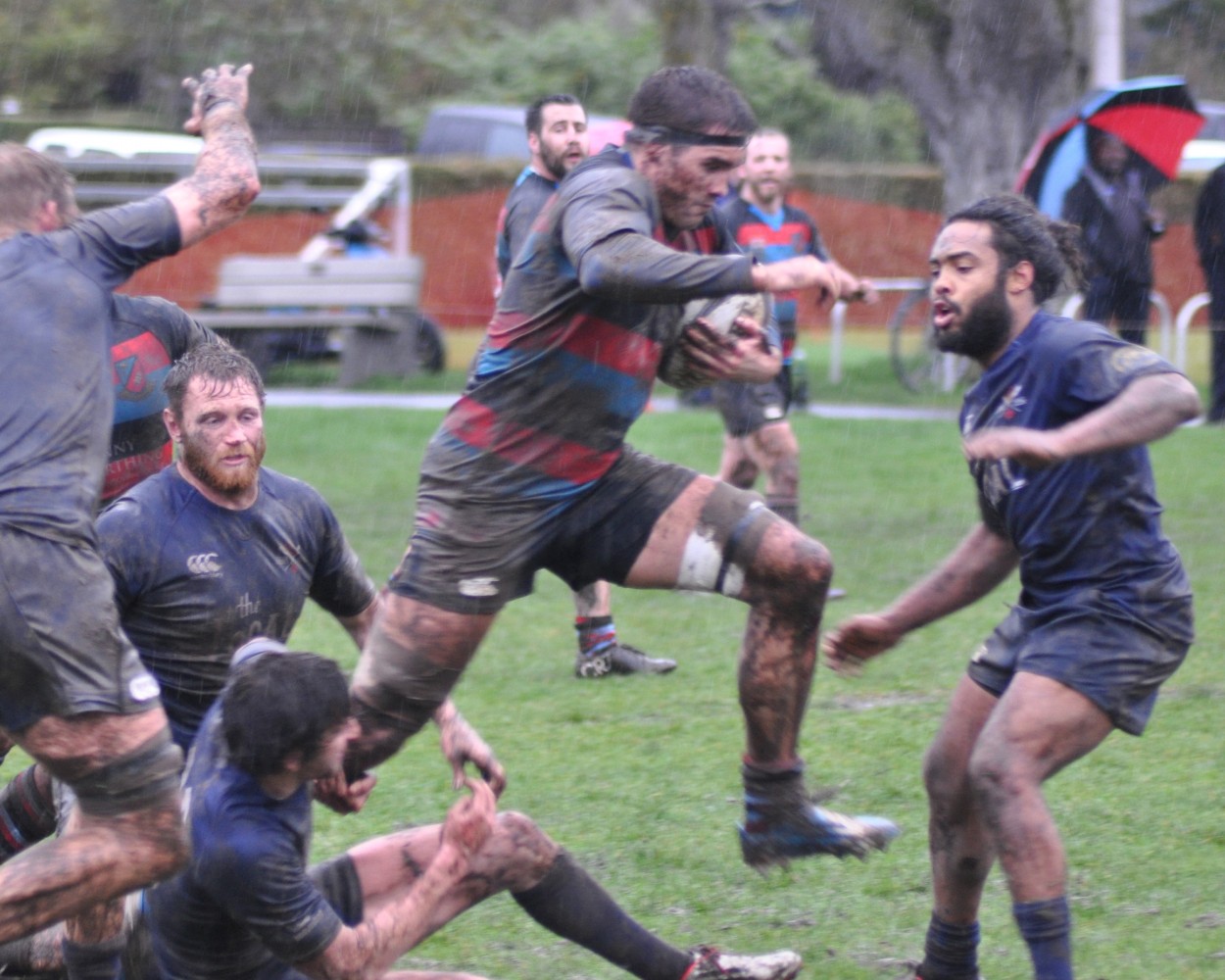 Glum in the skies, on the pitch and on the scoreboard. On Saturday, James Bay schooled their hosts in two games laying down over half a century of points to a bagel by the hosts, far too courteous a visit! The Ones played with an improved effort but on the day had trouble both winning and retaining possession. James Bay handled well, playing good wet weather rugby and were deserving of their 22 – 0 victory.

With the rain increasing and the field a quagmire, a worthy crowd had assembled to take in the Premier rivalry. CW got into strife from the kickoff, being pushed back, balls dropped and clearing attempts shaky, at best. Despite the pressure, they somehow miraculously avoided forfeiting a score and play ebbed around mid-field after the scare, with CW having a slight territorial advantage. Even in these early stages, one had a sense that an undersized host squad would be vulnerable in the heavy going. Crossland was forced to leave early under concussion protocol after a tackle of questionable timing. It was 18 minutes in when Block made a useful, weaving break. The ball was recycled to Racine who rambled for ten and passed inside to Captain, Harriman whose 10m burst was unstoppable, 7 - 0, JBAA. CW came back with some good recycles and with a slight edge in the set scrums and committed defence, hopes were buoyed. JBAA stuck to their strength, driving the ball from mauls and close interpassing they soon found themselves back in the CW quarter. A clever grubber kick saw CW scrambling and when a ball was fly hacked, failing to find touch all hands were on deck. A penalty resulted from this desperate defence, 10 – 0. Thus endeth the first half. For the home team at the half, praise for their commitment to the tackle however on attack, in trying to outflank James Bay, passes needed to be forced and they often went awry, along with the kicking from hand not always finding good space.

The Tricolours started the second stanza with verve however possession was kicked away and in having to defend, a tackle occurred that resulted in a yellow card, the offender being deemed not to have wrapped arms. From where I saw it, the pace of the two players and the collision was such that arms were out but the players “rebounded” not enabling a full “wrap”, perhaps a bit harsh under the conditions, a comment made by many but so it was and James Bay immediately capitalized, 15 – 0. By time served, the score had been doubled and upon return, the carnage continued, as what had previously been the superior set scrum now had been fractured, with disastrous results. The Bays had corrected their scrummage issues at the half and it became the weapon for three more tries along with some personal physical tolls. The final embarrassment being inflicted by the James Bay pack, winning a tight head and shunting the hosts backwards for a 27 – 0 score. The visitors added yet another and as the lights went out, mercifully, the whistle was blown, 32 – 0. Such a comprehensive score may have seemed undue given the effort expended but on this day, simply put, James Bay finished most of what they started.

The win had been platformed on a hard-working pack, led by Wakefield and Johnson, with the tight forwards inseparable with their efforts. I thought today, “JWR” Wilson-Ross played one of his best games I have seen from him – energetic, under control – a real problem-maker and M-o-M for my money. For the home team, good efforts from Thomas and Allen and others at times in the pack, with no shirkers but I give my M-o-M to Kelliher with Oliver a close second. In the backs, MacPherson gave good service and caused some agitation at the base, until injured and Fraser tried hard but the conditions and possession was not conducive to any backline strengths that may have been a chance. At the start, one look at the pitch and the sizeable opposition, one knew the task would be extremely difficult and so it came to pass.  Thank you to the M-i-t-M; well officiated, overall. Gut-check time so early in the season is a tough comment but continued hard work and drawing together for the cause will be essential in the coming weeks. CW is on the road next week to Jericho to a whole new challenge.

From Burnaby, a score for the Premier Women, a 40 – 0 win over SFU, keeping pace, one point behind Seattle who has a game in hand.

On the International front, the NSMT held the lead til the 57th minute when Captain Clever went to work, finishing with a hat-trick of tries and a 30 – 22, U.S. bonus point win. Clever has been a “clever” recall by Coach Mitchell, scoring four tries in two games for the cause. In other matches, Argentina d. Chile 52 – 15 and Uruguay d. Brazil 33 – 29.

Canada’s Men’s U20s lost a heart-breaker on the final play of the game to their U.S. counterparts, 19 – 18. The match was close throughout. Canada led 15 – 9 at the interval and went back on top at 18 – 16 with about four minutes remaining. The final nail was reported to be a fifty meter penalty! Indeed, the end of a glum day for this rugby fan!