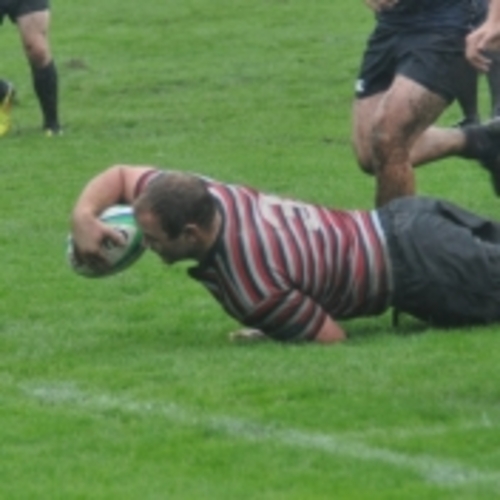 In horrendous weather conditions, CW dropped a pair of results to James Bay yesterday.  The Ones found themselves down 10 - 18 at the interval and failed to make any inroads in the second stanza, losing 17 - 33.

The Prems had a plot that could have and some might say, should have, succeeded but it was lost in its translation!  Under a total deluge, JBAA opened the scoring at the two minute mark when center Vince Herlaar brushed off a pair of attempted tackles and crossed under the sticks.  This man is a big unit and caused defensive havoc whenever he got a touch.  The CW scrum exerted some useful pressure, splintering the Bay's set piece but Thy De Goede at the back showed skill in saving his own team's ball whenever the head was not lost and scampering from would be advances.  He was rewarded with his own tally minutes before the half to bring the score to JBAA, 17 - 3.

As the teams swapped ends, it seemed that the "uphill" gradient might have been the advantage on this day as CW forwards gained more possession and forayed into the James Bay half on a number of occasions and although the defensive line bent, it was tough to break and credit to JB forwards who muscled up to the challenge.  Despite this, it was Woolridge who first got over the line and then Braddock made like a three quarter, bursting downfield.  The pack knocked on the door for a couple of series and that same man was shunted over to bring the score to 16 - 17, with a second half that to this point, had seen a momentum swing. On a rare James Bay possession, the ball was swung wide quickly and grubbered through for a chase by loosie, Smith, utilising the deep end zone for the winning points.  Plot lost!

This was a better composition on the field from CW than in past weeks, but akin to JBAA, it was still a "cobbled group".  The bonus point win was deserved, despite CW's chances.  Given the adversity of the weather all the players deserve credit for their efforts. So the benchmarks are gradually being set, on the Island and for the CDI Premier League. It will be a real challenge for CW to compete next week at North Vancouver against the Caps - an opportunity to see who is made of what!

For CW, mention must be made of Woolridge who displayed a high work rate and relished the heavy going, along with his FRF mates, Sears-Duru and Braddock.  Ilnicki worked hard and Diesel Jones was his usual "money" self.  Riley MacPherson on debut, was not out of place at #9 and did not shirk from tackles on the big men.  In fact, his battle with noted High School product from SLS, Lucien Nel, was intriguing. For JBAA, Wilson-Ross sought work all over the place, Miles, as usual, was quality and Jim and Thysen De Goede worked hard.  The CW backs could use the steadying influence of a Buckley or two and perhaps Zac Samson to add some thrust in the centers.  It may not be so, nor can it be regretted.  It is not a time to look for excuses, the socks must be pulled up because it is what it is. Go, CW!