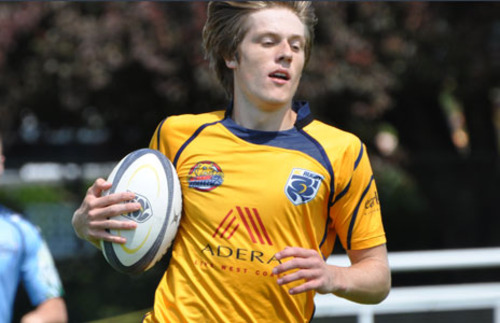 Hall excelled on the rugby pitch in 2012 with both the provincial XVs and Sevens programs. A standout in the BC Rugby Academy, Hall was instrumental in seeing British Columbia's U18 XVs side defend their title at nationals in Sherbrooke, Quebec this past August.

During the 2011-12 season, Fergus was selected to the U18 Canadian national men's sevens team that competed at the Youth Commonwealth Games in the Isle of Man and later went on to play for Canada's U19 team on their tour of the UK.

With the BC Elite Youth Sevens program, Hall was a key figure in the U18s going undefeated to lift three youth international titles in Las Vegas, Hong Kong and Victoria. During the Las Vegas cup final against national side High School All-Americans, Hall produced a flawless kicking performance going 5-for-5 in conversion attempts to see off the Americans 35-14.

Now an Engineering Major at the University of Victoria, Hall has had an impressive rookie campaign with the Vikes capturing a National University Sevens championship as well as the Las Vegas Sevens Invitational Sevens University title.  Fergus, who started his rugby career as a CW mini player at age eight, is a great role model for all young players.  On this evening, he stood tall with other outstanding BC athletes, Female AOY - Christine Sinclair and Male AOY - Ryan Cochrane.