Down Comes To Town 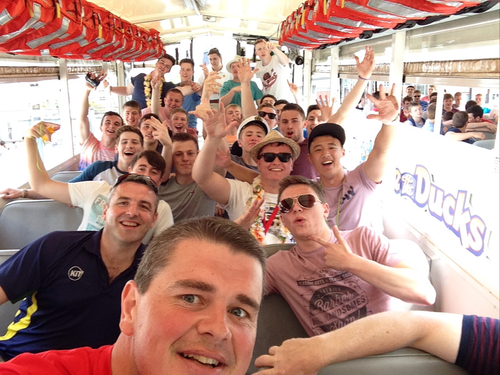 Pictured are three Presidents of the V.I.R.U.  Past President, John Wrafter, recently completed term of office, Andrew Spray and leader for the future, John Lyall.  The occasion was the recognition of the work of Andrew over the past umpteen seasons in the role; by the clubs of the V.I.R.U.  Andrew's leadership for the clubs and the Island has been examplary, as was John's before.  He always brought a measure of fairness, patience and good common sense to every situation. 'onya, Andrew and the best of wishes and thanks to John Lyall as he steers the ship into the future. Thanks to Mikey Holmes for his generosity in enabling the occasion to be even more memorable.

In preparation for their upcoming Tour to South America & the CRC's, we saw the Bears hard at it in town this week.  Our best wishes go with the group and DON"T FORGET FUNDRAISER BARBIE & AUCTION AT THE TEMPLE NEXT FRIDAY.

Speaking of CRC's, we note the Ontario Blues, led by Perennial Pucker, took one Stateside off the "All Americans", in their preparation to defend the title.
'onya, Pucker!