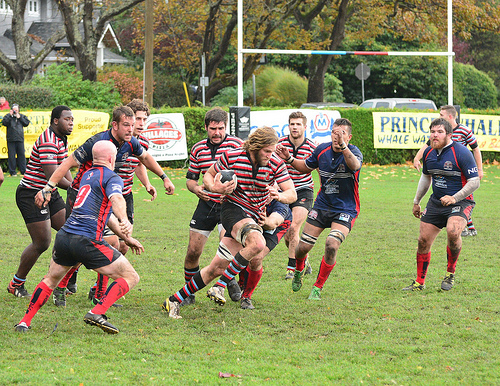 Saturday at Windsor saw no joy in Mudville, with the season’s best home crowd leaving the park somewhat frustrated after watching the boys leave competition points on the plate, dropping a 5 – 7 decision to The Ravens.

The Raven opened with pressure and posted first points after an early missed penalty when, at the ten minute mark, Graf moved the ball short side for Law to cross out wide. This was converted for a 7 – 0 lead.  There is nothing of note to add for the “middle minutes”, although Braddock, Middleton and Evans showed energy on defense for Ceedub and Kehoe looked dangerous with every touch on offense.  CW worked play to the red zone and after 4/5 phases, Armstrong chose short side to DJ Sears who sprung Evans for the try wide out.  The convert was missed and that was to be the difference on the day!

CW started the second spell with enthusiasm and dominance in the set scrum was especially noticeable.  Ravens were under the cosh but after twenty minutes of hard work and territorial advantage, two glaring errors enabled the Ravens to break out and add their own pressure.  At the thirty minute mark a penalty attempt by Old Boys bounced off the post into Morrison’s hands and it was “all hands on deck” to prevent a tally.  OB’s, akin to CW, failed to put the nail in and it was CW’s turn to work play downfield to earn a 40 meter penalty shot for Buckley with five minutes on the clock.  The score board did not roll and that was all she wrote with an additional chance for CW only to be thwarted by yet another knock on.

The Hosts had arguably; the best of the battle and territory, no matter, the Ravens had finished with their third consecutive victory.  It was not quality rugby but as predicted, it was intriguing.  A fair result may have been a tie as was the case last season between these two but the outcome seems to typify CW’s season so far.  Somewhere a difference making factor needs to found.

For UBCOB, MoM was adjudged by the players as Captain, Garbe who did get through some work and Wittenberg was given the honor in the backs.  For CW Morris and Kehoe were the recipients but for this viewer Raven’s Waggott and CW’s Kehoe were head and shoulders above their team mates.  CW did have others who stuck with the plot – Sears, Braddock, Middleton, Daume, van Buren and Ilnicki were the basis of a pack that debatably, had their edge over the opposition and in the backs, Horton and Evans gave a solid showing.  The efforts of the Lomas across town at McDonald, raises a red flag as CW’s next game is at the Lomadome on Saturday week.

In the curtain raiser, CW led 15 – 8 at the half and went further ahead, 22- 8, only to have to make three significant subs and fade to a heart-breaking 22- 24 loss.  The Old Boys went ahead with minutes on the clock when a clearing kick was blocked.  Just another exclamation on the importance of the kicking game, a weapon that no back can be excused for not having in their arsenal.  The Ones remain mired in the Ceili’s cellar.

To finish the reports on a high note; Lots of tallies were the order of the day at Velox Field on Sunday, when CW’s U14’s came away with a victory over the Hosts.  Hats off to Tricolor kids for courageous tackling, strong running and quality handling.