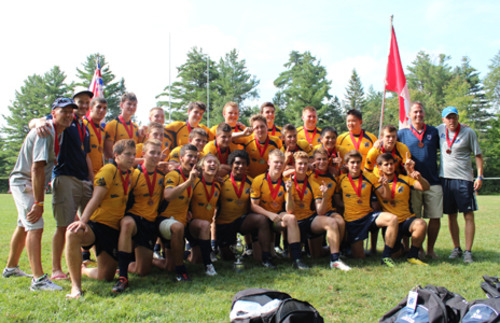 Pictured in last year's BC winning U16 team at the CRC's, CW's Jack Nyren has continued with his representative career, recently being announced as selected to the B.C. U17 team for the upcoming PRC's.  Some players could very well be selected for the B.C. U18 Championships from this competition. Nyren is only one of two Islanders selected to the 25 man squad, fourteen of the boys coming from the coaches' home clubs of Capilanos and Bayside.  Playing Rep rugby is a tough "go" for many reasons.......player-pay, distances for trials and visability for coaches, to name a few.  B.C. is trying to level the playing field by providing trial and training opportunities throughout the Province but even if the best players are being seen, then there is the affordability factor.  One often queries just how increases on dues by Rugby Canada are coming back to the "grass roots".  This scribe once again refers to 20 Support Staff and 23 players at the recent Tonga match.  Regardless, CW congratulates Jack and his supportive parents.  We leave you with the following quotes from Jacko at Last Year's U16 CRC's in Ontario when B.C. defeated the host;

In a tightly contested final between the country's biggest rivals, the BC-1 Gold U16 men's team led from start to finish narrowly defeating Ontario-1 by a score of 15-13. BC took a comfortable 12-0 lead into half time through tries by Theo Sauder (Vancouver Rowing Club) and Jack Nyren (Castaway Wanderers RFC)  with Nyren providing the conversion. In the second half, BC's only points came courtesy of a Nyren penalty. Ontario trailed 15-8 and crashed over for a try in the final play of the game, but the conversion fell short and saw BC successfully defend their national title.

"It was a pretty hard fought game. We scored a try in the first half and followed it up with another one. But when they scored it didn't really phase us," said Nyren after the game. "It's a pretty great feeling to hold this trophy - this is my third national championship so this is pretty sweet."  Let's hope it is "pretty sweet" for Jack again......go, Jack,go!