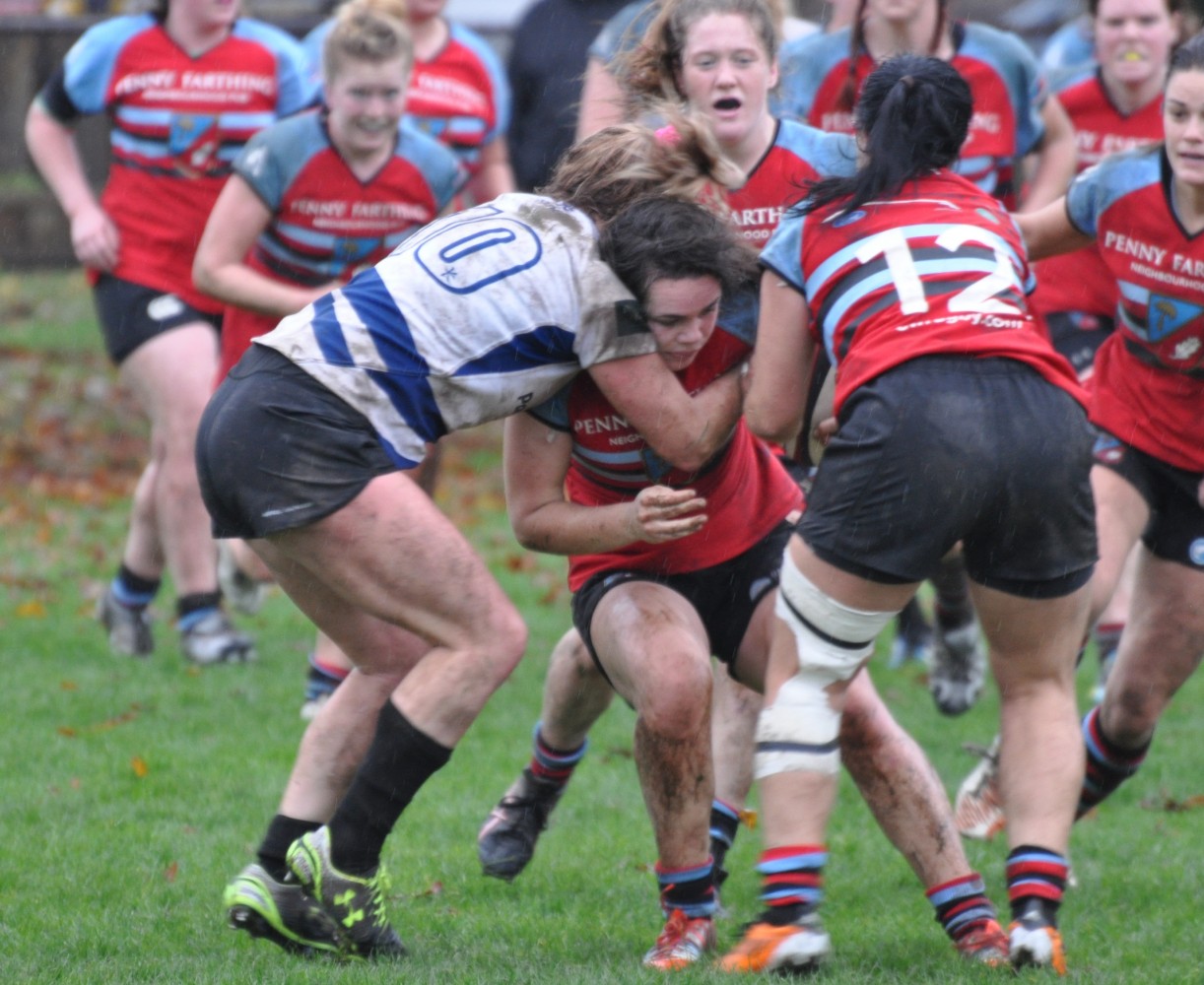 It was a throwback to over a decade ago when league rugby returned to Carnarvon yesterday – and a huge thanks to the neighbours who retrieved some balls booted over their fence – hope you enjoyed the games! Decimation of the Windsor site saw CW playng at Carnarvon for the 2005/06 season. We were also reminded by a hawk-eyed reader that Abrams scoot to the line shown in our blog photo, was also being watched by Ken Wilke, spotted in the background. VIPS/Wilks was one of Canada’s finest backrow players of all time and he plied his trade up and down Carnarvon, for a number of seasons, wearing the ‘baby blue’ of Castaways before he donned the ‘navy blue’ of James Bay. So much for the history lesson. Now to the matches.
Westshore women came loaded for bear!  It appeared to this observer that the squad has bolstered itself in a few spots, notably the backline with the addition of Latoya Blackwood, a backline which fired on all seven cylinders on this day, mostly set up with great “go ahead” ball from a pack which was also pretty much error free.  Eight tries to a “sniff” of the line was impressive stuff, no doubt giving the “Double V” plenty of boasting ammo for today and future meetings!  Despite very strong games from #2 Sims (?), #3 Lang and #8 Mervin in the forwards and the two centers, one reputedly on cameo appearance and #15 McGinnis, I have to award #10, Megan Howat with W-o-M.  The Tryfest included not just the bread and butter, pick and drive but some clever, hard run lines which added a certain luster to the affair for Westshore.  Final total, Westshore 43 (not a reported 50, in other circles), CW 0.

There was not much joy in Mudville for The Hosts however, it could be said that they did not capitulate and almost the total bench got in on the tackling practise, as the side was virtually deprived of the ball except for the odd turnover which never seemed to turn out right and penalties earned from transgressions. I thought #2, a cameo from Kirby and Shaye Tudor in the forwards and Sargent and Galbraith in the backs stood out, with Shaye earning W-o-M for CW.  This result leaves The Tricolours further ensconced in the basement, yet there was still plenty of post-game positivity with “goals’ talk” about still making the playoffs.  Time will tell, as a total reversal will be required.

First Div: Early Westshore possession and field position needed to be rebutted before we saw what The Hosts could offer and there was plenty of zest there with two penalties being slotted from both visits to the red zone.  Westshore responded with a twenty meter scoot from an inside channel by the #10, a shifty character on this day, 6 – 5.  They continued with further pressure, predominantly from the set scrum, shunting CW’s FRF, no chopped liver in itself, backwards providing Schellie with a mess and this eventually led to another try and the go-ahead score, 6 – 12.  This scrummaging issue provided a good learning experience for Baird and Sponarski, a pair of solid young props who, by the end of the day had some measure of revenge.

This second tally seemed to waken the CW forwards whose work in the loose became more visible, with better body position at the breakdown, good ball was produced which Schellenberger used threateningly with every touch.  Finally, he broke the ice after a wide double-dummy angular break and a slip to Turchet for the lead, 13 – 12. The Westshore scrum half single-handedly came back with a real threat (including a nifty fake chip) and the big pack revelled in the contest.  The Tricolour proved to have their measure when Sponarski made a serious ramble and fed to Doug Pearson, a hooker who has special mobility in the open, 20 – 12.  Didn’t note a half-time score line due to heavy rain allowing only for the scoring opportunities!  Gerhardt was given a yellow on a rather impetuous shoulder charge after an offload and this was not a day to be a man short.  Velox put CW under the cosh, needing to defend desperately for a long period and Hohert need to depart and Evans was replaced, cause unknown, the dam broke, when from a scrum, try number three was muscled over.  There was plenty of time and at 20 – 17 the affair hung in the balance.

With Gerhardt’s reappearance, he was immediately given an opportunity for redemption with a 48 meter shot at goal which he converted, 23 – 17. Westshore was not to be denied when they again maintained a period of red zone position and when CW was penalised, they opted for the scrum, from which they scored their fourth and bonus point try, 23 – 24. Unfortunately, for Westshore after a “go-ahead” penalty, Gerhardt’s fourth, a certain level of frustration appeared and two more penalties later, the final score stood at 32 – 24, with Gerhardt, an avenged transgressor ending up with a personal bag of 22 points.

Kudos to both sides and the day’s sole official.  Travelling from Port Alberni, the ump found himself alone, not enough time to have the fields lined AND roped, so rabid/avid supporters urging on their soldiers and what a job he did.  The passion on the pitch, did not leave him any room to watch much apart from the ball and with two teams, pushing to get the edge, one can imagine the goings on.  Despite this and the weather being so dismal, the players are also to be congratulated on keeping the lid on it. Not prepared to differentiate for The Visitors but for Ceedub, definitely, Schellie gets M-o-M.  Brendan has been included in a long list for Canada U19 with trials upcoming.  We wish him all the best. Today’s W leapfrogs The Ones into fourth place on the table. Finally, befitting Heroes off the Field, bouquets to Shep for getting over to line the field so the matches could take place.

Elsewhere: To Schellie’s name we add Dayman Adams who played in yesterday’s affair; from UVic and last year’s U18’s at the club, Brennig Prevost, Callum Masterton, Gavin Kratz and CW U18’s, Lachie Kratz, at sixteen years of age; have also been added to the list. Truly an honour for Lachlan and an experience that should enhance his leadership and playing skills. We wish all these lads the best of luck as they push their case for higher honours.

We take time to wish our archivist, photographer, former treasurer, supporter extraordinaire and all round good guy, Ron Willems all the best as he undergoes surgery this week. ‘onya, Ron, we know you are ready to overcome this challenge.

Finally, guess there will a lot of green around rugby circles today! A very significant and comprehensive victory by Ireland over the All Blacks yesterday in Chicago. Bit of a pity for ‘The Weeman’, Ian Hickman, who made the sojourn to cheer his beloved Blex but that’s the way it goes….on any given day!