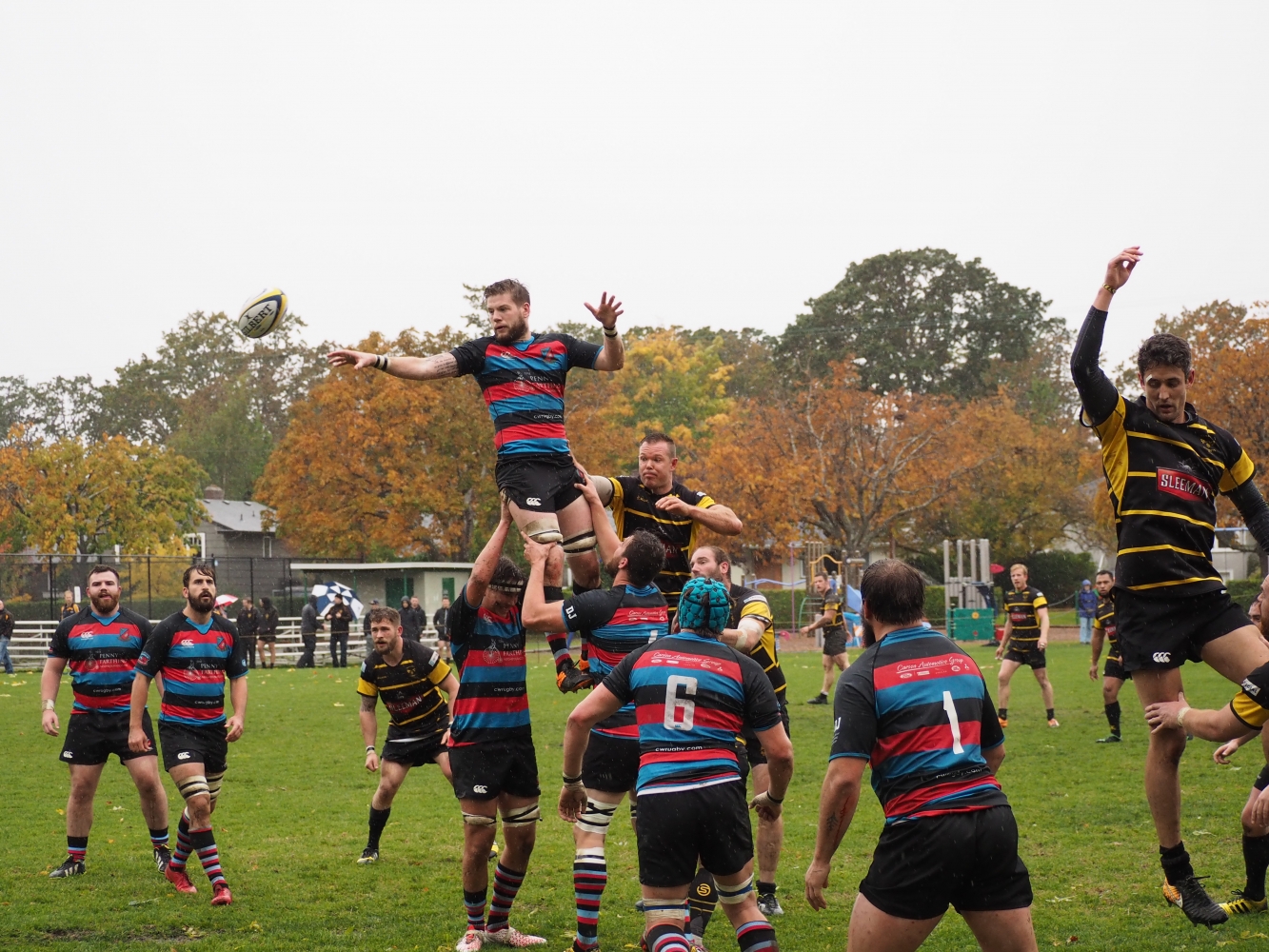 In the most miserable of conditions, teams from the top and the basement came together to do battle at the House of Windsor on Saturday. Must take my hat off to the Hornets for sticking with it against a team with considerably more ammo and although the score line may suggest a shellacking, the black and gold could leave with heads high. Scores across the league were considerably close with the advent of fall’s ferocities.

At The Park, Nanaimo kicked off and CW knocked on, Nanaimo retrieved and put pressure on with ten or so quality phases and 40m of territory. With the game not two minutes old, Tulia slotted the neatest of left-footed ‘droppies’ from 10 m range. CW was shocked and responded from their own half. Fraser initiated an attack, “missing” Mortimer and feeding Logan from the blind side, on to Newman and inside ball to Keta. 5 – 3. CW then had the better of a kicking exchange and Fraser fed Polson down the blind side, he took the tackle and popped to Dobravsky, 12 – 3. Nanaimo’s Evans slotted a penalty at 10 mins, 12 – 6. Nanaimo’s tenacity was a credit and duly rewarded when 20 mins in Bradley fed Stephens and two missed tackles later, he crossed for a try. 12 – 11. CW’s passing was far from crisp and the wet bounces had them under the cosh, with Nanaimo having the better of the territorial exchanges, on one such foray, Keta, desperately “skittered” a ball to touch. CW did not look in danger but their game was not working in the conditions. A useful break by Nanaimo’s, #9, Fowler who was gold all day, got the Visitors back to the red zone, where they recycled for almost 3 mins under a penalty “advantage”, ultimately missing the go-ahead points at the 30 min mark which proved to be all she wrote for their score sheet. CW finished the half with a brace of tries from Fennimore on debut after Newman and Logan had been prominent.

The second half developed with the tenet of the “premise of possession” being cast aside with a number of ill-advised attempts at the kicking game, with what seemed like the hopes of generating points, rather than sticking to the knitting and playing a game that the circumstances predicated. No doubt Scott’s stats and video view will outline the fact that this was far from a polished display. Nanaimo started the second stanza with continued resolve and Stephens got close to the line again in the first 10 mins and the ensuing error must have been deflating when Dobravsky went “blind” and fed Fraser for an easy try at the 15 min mark. CW then substituted liberally; Polson was next in the parade when he went over from a 30m lineout drive for 34 – 11. Schelly went 50m on a very individual slice and dice, 41 – 11. Povey then “diagonalled” to Finnemore, sea-gulling wide, for his hat-trick, 46 – 11. Finally, it was Schelly again when he snuck down the blind side for his brace and final, 51 – 11.

Firstly, a thanks to Hugh Creighton on the scoreboard on this miserable day. Thanks to ‘Jetter’ and Gord for standing gate duty on a day we advertised “free” to add $100 to the coffers, ‘onyas. A thanks to Kevin Smith, M-i-M and his one appointed touchie. For Nanaimo, Fowler at #9 had a good day as did Tulia until he left with an injury. Stephens was the pick of the other backs. #4 Halaliku worked hard all game and I liked Milford til he left the fray. In all, a good effort. Again, the difficulties of the next tier were apparent by the lack of bench strength and the ability to go the full eighty with a side that can push the envelope. Best of luck for the remainder of the season.

For the locals, well…..the team did not really adjust that well to the conditions and things will need to be very different next week against the Birds of UBC. Finnemore was huge on debut and certainly has the goods. Polson was his usual self and although the FRF starters were split early, this week I give Sponarski full marks. D.D. was good value and took over the captaincy seamlessly. Again, I liked the work of Stewart as the standout in my books. Yak and Tieds had fun in their cameo, particularly Nanyak who relished his ball-carrying role. Newman gets my nod as M-0-M and the pick of the backs. Captain Fraser led well and was obvious with his efforts to play the conditions. I give Schelly my vote as #2 in the backs and Logan again, and ‘Ice’ Povey got through plenty of work.

Next Saturday it is a ‘roadie’ to Tbird Stadium where CW will be tested severely in trying to remain undefeated with good contests at both grades, Braves and Birds. Work hard with your prep this week guys and keep the train rolling.