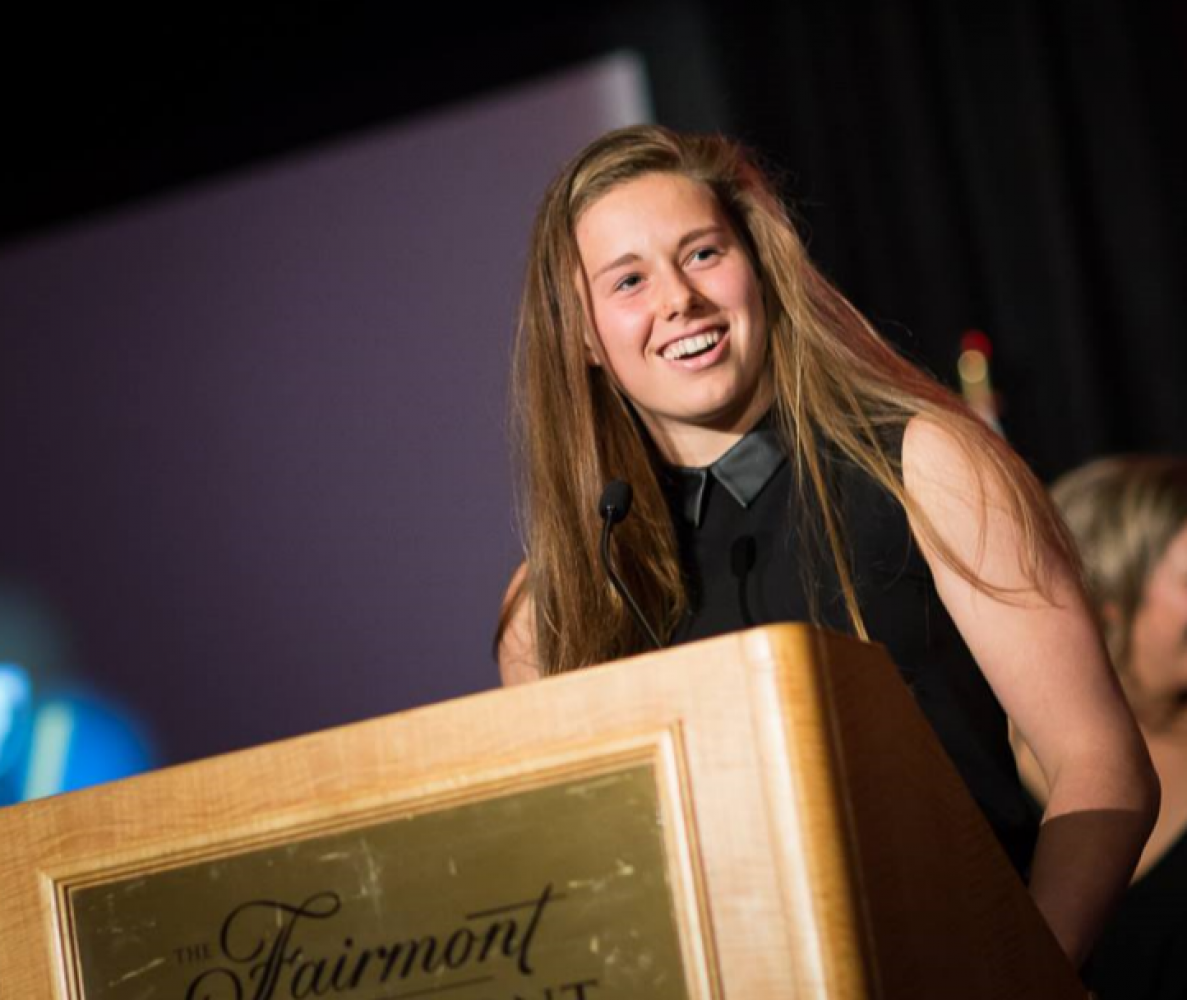 Today we wish to offer our honouring of recipients recognized at last Thursday’s fourth, Rugby Canada Annual Awards Dinner. It was a BIG night for The Tricolour, an event which deserved earlier laudings. Let’s start with the inaugural class of the Canadian Rugby Hall of Fame. Gareth Rees, who recognizes CW as “my club” and Ro Hindson who played with both Wanderers and Castaways were two of nine men and women to be inducted. Their contributions and achievements are innumerable and immense and we offer our deepest congratulations to them.

Sophie gives a young, "don't argue"!
At the opposite end of the scale was the Young Female Player of the Year, Sophie De Goede. From her early years (age seven), Soph started with minis at CW and moved through the age grades. As a multi-sports star, Sophie will attend Queens Uni where she will follow her dual passions of basketball and rugby. Well deserved, Sophie. This was a nice feather in the CW cap, demonstrating a pathway in the game and following her team mate, last year’s winner, Caroline Crossley. We saw both ladies in action on the weekend and WOW!

Then there was Sophie’s mum, Stephanie White, dual RWC XV’s Women’s Captain, who was honoured as an Honorary Life Member.  Steph was a superb player, R.C. Board member and of late, initiator of Women’s Development Funding.  What is CW’s association with Steph?  Few would know that she was a minis' coach with the club during her daughter’s early years and a strong supporter with the age grade teams.  ‘onya, Steph.

Finally, recognition of two current National Team players.  CW was not part of their early development but they have chosen to hang their hats with us and our club is much the better for it.  These players received a vote of what could virtually be called the Players’ Player Award – the Hard Hat Award!  Julianne Zussman, winning the Gillian Florence Award, was the Female Player of the Year.  ‘Zuss’ was not only the “backstop” for Canada’s national team at #15, she was the backbone of our Premier Champs last season and sustains that role today.  Ray Barkwill, comes and goes, dependant on his playing commitments.  Ray won the Men’s Canadian Shield Award and he was recently honoured as being selected to Captain the side in three of the recent ARC matches.  ‘Rayzor’ has become a ‘true blue’ Tricolour after five seasons, assisting cub coaching wherever he can and enjoying donning the shirt whenever!.

Achievements are won by individuals, members of a team, they are part of and have contributed to its success.  CW congratulates and is deeply honoured by our connection with each of these individuals and their contributions to club and country, as mentioned earlier, have been innumerable and immense.  We offer our heartiest congratulations to them.