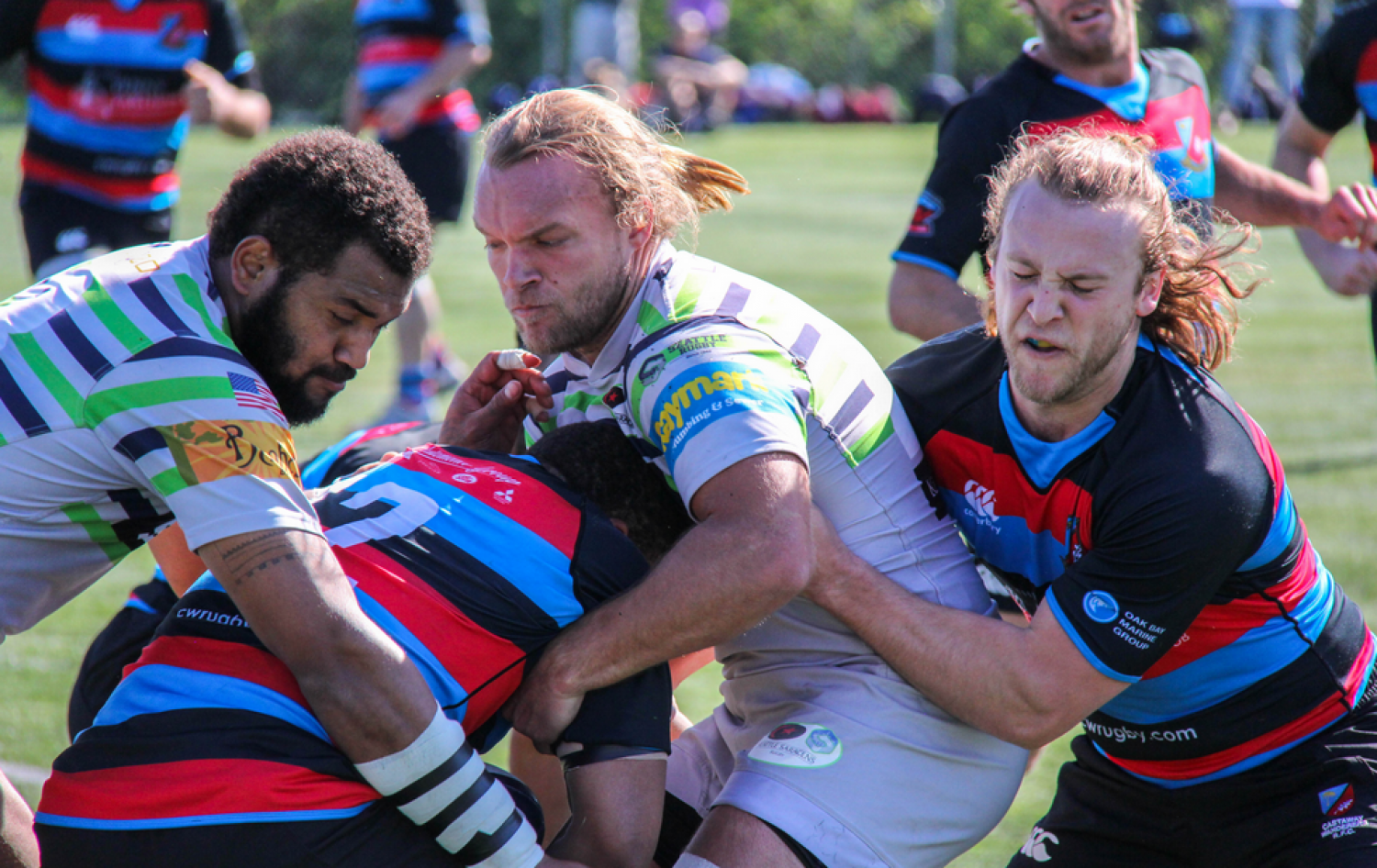 Who Let the Dogs In?  It was rather a bizarre Mullet Tour for the boys to Seattle this weekend. After a 5:00 a.m. rising for a 5:50 departure, the group was delayed for nearly three hours at the border crossing, compliments of yet, another Executive Order. Upon arrival, the teams mutually decided to reverse the order of games due to some concern about available daylight. A brief warm-up and it was “game on” for the Prems. Will spare the details (as we don’t have them at this stage!), suffice to say, The Sarries, led by Trouville, newly selected Eagle prop, Kilifi and Rasilaka, were ahead with mere ticks on the clock when, Eureka, Dougie Fraser intercepted an errant pass and The Tricolors took the match, 21 – 20! The Reserves were not as fortunate, going down to their hosts, 12 – 38. The group, at their own expense, enjoyed the post-game hosting and a night, sleepless (??), in Seattle. Probably adjudged by the coach as a good start for the campaign overall. Thanks to Sarries and refs on the day.

At Home a number (some 26), enjoyed their rugby fix at 1:00 p.m. in a match Vs JBAA.  It is plaudits to both clubs, being able to field a third senior men’s team, whilst having two others “on the road” at Burnaby and Seattle.  For CW, the forwards led again by Brian Kim and supported by Kyle Hohert with Julian Carnet and Pete Robb off the bench, provided good ball for a quality halves pairing of Hickman and Gerhardt with punch from Henderson in the centers and this proved too much for the Bays. The defence was also solid, keeping the line uncrossed for consecutive games. (Ed. – Apologies for not publicizing this match – computer idiosyncrasies!!)

From Wellington (N.Z.), a HUGE Tourney for NSMT 7’s.  The lads went 3 – 0 on day #1 with a highlight win, 28 -19 over Scotland (fourth place overall) adding Wales and Russia to their scalps and winning their pool.  Day #2 saw a quarter final win over Argentina and a quality semi, winning all the stats except the score against South Africa.  Two unfortunate plays were the differential, the Blitzbokkies going on to win the whole shooting match, beating Fiji by a similar score in the final.  Canada, avec les blessures, came from behind to inch ahead, 21 – 20 in a return contest with Scotland.  From the ensuing, deep kickoff, one tackle was missed and the Scots went the length of the field for a third place finish and solidification of their overall fourth place standing in The Show.  Must doff the cap to Zaruba’s hat-trick in this one.  Canada’s fifteen points earned, moved them from 13th to 12th.  It was a great result and we congratulate all involved.  It is disconcerting to read of injury reports to Jones, Mullins, Hirayama and Douglas going in to Sydney next weekend, in with USA (11th), Argentina and Russia.

Zaruba on the Dream Team after Wellington - 'onya, Zoobs!