A Smorgasbord of Junior Rugby 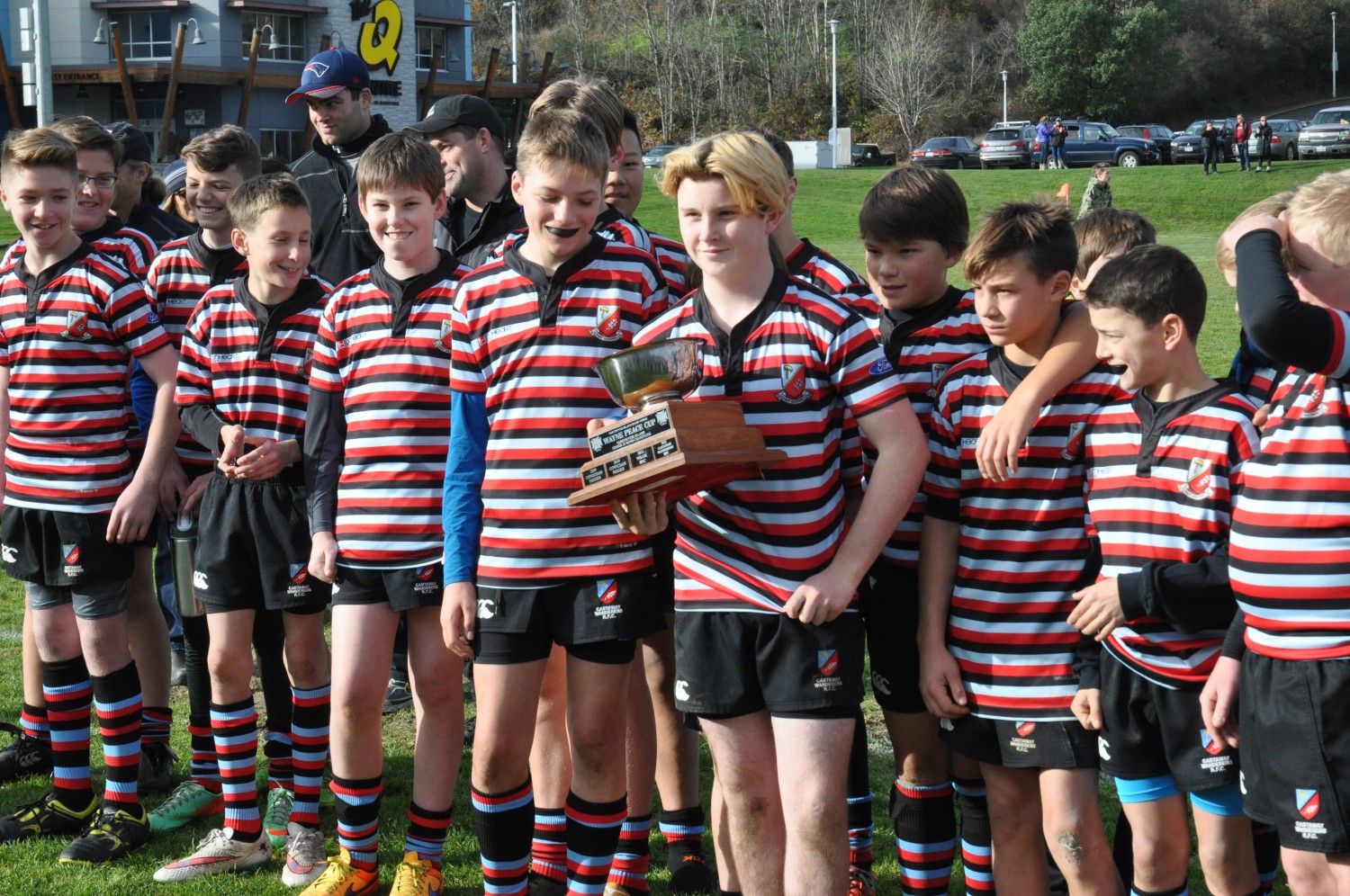 It was another possible Trifecta Day for Ceedub on day #2 of the weekend.  When the dust settled, CW U14 and U18 Boys were VIRU, Island Champs.  The U14’s set the ball rolling out at Westshore, defeating their hosts Westshore RFC, 29 – 7.  The club wishes to congratulate ALL of the boys in the program.  The U14’s have had almost forty boys registered this season, so not all could play in the Final.  It’s a HUGE congratulations to all of the boys who have turned out, practised and played to learn the game of rugby, (CW style), throughout the season.  Thanks to the player’s parents who understood the complexity of the issue.  CW is somewhat a victim of its own success “graduating” so many boys and girls form Minis to age grade rugby.  A doff of The Ruggernut’s cap to Shane and his co-coaches.  Great job.

The U16 Boys ranked #1 after League play were matched against Cowichan, called into a semis slot after the Abbotsford club withdrew from the League in the late going.  This snafu emphasised once again, the need for consistent League parameters to be consistently implemented.  Regardless, Cowichan arrived loaded for bear with a very well-drilled team, possibly surprising the Hosts somewhat.  The Piggies quickly jumped out to a 14 – 5 lead with two well-earned tries.  CW seemed to settle and showed some good phases.  Players from both sides enthusiastically engaged each other, with skill, pace and structure at the fore.  The teams had some big, strong boys and there was plenty of courage shown in the tackle.  This score line remained at the interval.

Cowichan had decided strength with a big, hard running prop who added to their total early in the second stanza, 19 – 5, after his forty meter romp.  The Piggies had other strengths with skill and pace at #12, 11 and a rather clever #10 who directed his runners with skilled passes.  #12 crossed for his brace and a 24 – 5 lead.  Late in the game, he broke away again for an “unconfirmed” hat trick, 29 – 5.  CW tried hard but the defensive pressure caused handling errors and denied continuity.  CW did score late in the game to reduce the gap to 12 – 29, probably a fair indication of the difference between the two sides on the day.

This pundit gives Devon Finnerty and Jack Carson a high five.  Others tried hard but on the day, as mentioned, more than met their match.  Congratulations to Cowichan and good luck, representing the Island in the B.C. Final next week.

CW U18 Boys.  This match opened with an accurate, Brennig Prevost, three-pointer.  Play ebbed as the two sides tested each other.  The skill level was high and the pace, aplenty.  CW’s Braydon Tate made a nice break and three recycles later, Carter White barged over to open a 10 – 0 lead.  Cowichan responded after a good build up and a couple of high tackles , allowing their runners meters, ending in a well-earned, diving try in the corner, 10 – 5.  It was Prevost again, slotting a trey after a good Schellenberger break.  13 – 5 at the interval.

The second stanza started with early Cowichan scoring following a fifty meter run, the man eluding some four or five tackles with classic swerving, 13 – 12.  Game on!  Prevost’s skill with the boot, ball in hand and Robinson’s probes to set the outside men as threats kept Ceedub on the front foot and following a penalty for a Cowichan high tackle, Tate took a quick tap and fed Masterton who earned the try.  At 18 - 12, Cowichan was still definitely “in the game” and when their talented and pacey left winger made a forty meter breakout, it was Prevost’s tackle as last defender that saved the tally.  He then added another penalty to widen the gap to 21 – 12 and that was where it stayed.

The dying minutes were very exciting as Duncan made a try-saving tackle for CW.  Schellie made a massive, swerving, dummying break down the right flank, linked with two players for what looked like being a classic try.  From nowhere the Cowichan left wing flew for the halting tackle.  Cowichan managed to get the ball back and raced play to the “red zone”.  It was a massive “release” for all when the ball was stolen and the Captain booted it “dead”.  CW, VIRU Island Champs in a fantastic game of rugby.

For this viewer, every player for CW played some critical part at some phase of the game.  I liked David Carson, Carter White and Callum Masterton as my pick of the pack.  All of the backs were threatening but Schellenberger, Tate and Robinson get the nod with Brennig Prevost, M-o-M.  Kudos to Cowichan who brought much to the table in this one and a 'thank you, congrats' to Spenny and Rogie. CW now plays Caps next week on Super Sunday at UVic.
THANK YOU TO ALL OFFICIALS FOR THESE GAMES, MOST SERVING DOUBLE DUTY FOR THE WEEKEND, SOME TRIPLE HEADERS.  LET'S NOTE THIS.  SOMETIMES WE ARE CRITICAL FROM THE SIDELINES BUT THERE IS  A SHORTAGE OF REFS AND THEY ALL DO THEIR BEST.