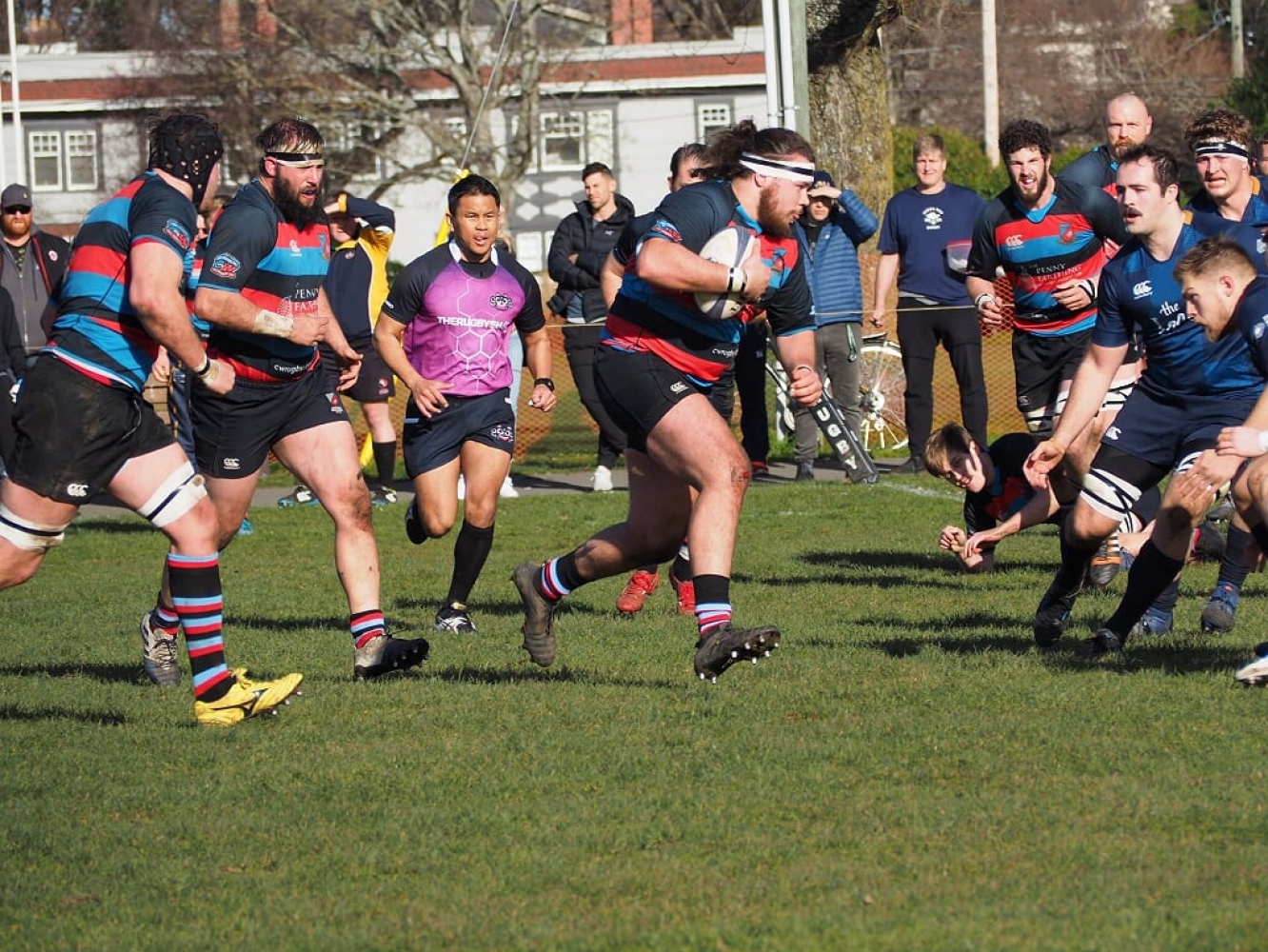 Horton on the rampage.

Top billing this week belongs to Men’s Prems. Both men’s teams came away with W’s; as it should be in the case of a Local Derby, two close score lines in hard-fought matches. The day was brilliant and the crowd was the season’s biggest.

CW opened the Premier match with good energy and earned a penalty in the early going. An easy chance was missed. The pressure was retained and field position and error-free possession, saw a very wide “miss” pass from Devillers to Pitblado to cross untouched near the posts. A second kick was missed. It took some eighteen minutes before JBA cleared their half with a deep kick only for CW, with tails up, return the yards. It was around mid-half when Schelly slipped a tackle and pinned his ears and fed, the ball going through some five pairs of hands and travelling sixty metres before Hammond dived over, conversion missed, 10 – 0. JBA earned their first points with about seven minutes left, 10 – 3. JBA’s, Fidinde then broke free for a dangerous probe and fed Nieuwenhuysen but it was snuffed with committed defense. There was a series of “to’s and fro’s” and the pressure from the combatants was intense with the ground hard to come by. With minutes to the interval, van Heyningen was deemed to infringe after play had moved on and was shown a yellow, this coming after a commendable break from the same man. This was to prove a minor turning point. CW’s stifling defense was causing frustration and the half ended.

The second half opened electrically when CW took their advantage. It was a beautiful feint of hand from Schelly to Horton that put the home team deep into Bays territory. From an ensuing lineout, a facet of play that CW absolutely owned on the day, quality ball went to Herron on a wide sweep from the front and at full steam, passed wide to Hall and a magic feed to ‘Mercury’ Morra, 15 – 3. An audible groan from the faithful accompanied the relatively easy missed, twelfth point. Shortly after, Coats added his second trey. From the kickoff, Morra boosted the spirits of his mates, when yet again, he was everywhere, leaping high to magically regain possession. With CW looking dangerous, a penalty was incurred which eased the pressure for the Blues. Play was “Even Stevens” as the clock ticked on.

Mid-half JBA had a penalty favour but no blood resulted as their momentum continued to be halted. The next highlight was a Fergus Hall counter attack, backing himself at pace, he sliced through a gap and fed Bradley, subsequent wide ball from Schelly, now at #9, almost put Hammond away. This pressure resulted in another penalty for CW and Devillers did the honours for a “three score” lead, 18 – 6. With about five minutes left, Nieuwenhuysen used his size and pace to bump off three tacklers and scoot some 35 metres to draw it to 18 – 13. James Bay mustered their energy level and when Fidinde, again broke from a scrum about 45 metres out and scooted down the sideline, leaving “would-be’s” in his wake, things were desperate. Not sure who gets the credit but the cover defense forced a foot into touch. That was all this scribe wrote!

This was playoff rugby – hard and close. In this pundit’s eyes, very well and accurately orchestrated by referee, Mason – well done. The Bays may not agree with this comment but their own lack of discipline served somewhat to their detriment. This site talked pre-game about the need for players to “step up” if this game was to be won and thus it came to pass, to a man, for the home team. For the visitors there were a number who impressed. I thought big, Nieuwenhuysen in the centres caused CW the most trouble. Also in the backs, Coats at #10 (CW’s M-o-M) was a smooth customer and Lloyd, on the wing had his moments but was basically nullified by the Eveready Bunny, Morra. In the pack, JC Fidinde was the danger man as he was at the last meeting and the CW boys gave M-o-M to lock, Fisher Kooman. I thought de Goede also did Trojan’s work.

To CW. I felt a number of the boys had “season’s best”. The lads gave the Hard Hat to Finnie and the Bays chose M-o-M as Finnie and Josiah. In the backs, one could have “thrown a blanket” over the diminutive, Schelly who knows no bounds, Hall, with his artistry on the day and Pitsy whose touch-finders were first class. Of all the backs ‘Mercury’ Morra whose past two club appearances have enhanced his pedigree, had to be the danger man. To name any one man as a standout in the pack would be a fallacy, as I am sure the forwards would have it. Chiz’s leadership was inspiring and the lineout work was HUGE, the rest of it was rock-solid; the odd skirmish at the sets but some well-won penalties at the same phase. The pack denied possession and their defense and work rate was massive. This was a very good outcome for The Tricolours, now moving to 7 – 5 and a clear sixth place on the table. Next week, it’s cross-town to Westshore and the pedal will need to be on the floor.

The writer’s day had commenced at Carnarvon where I took in the first forty of the Reserves game – forty of the best rugby seen this season from The Divvies and a 17 – 3 lead.  Good thing I missed the second stanza as I heard structure, patience and discipline went out the window.  Lesson to be learned, substitutions must be seamless and poise and focus critical.  It was a final score of 29 – 24 with Ollie Winsor, salvaging the affair, weaseling over on the whistle for the bonus point, four tries to three, win.

The scoring opened after hard yards from Gerhardt and wide ball going to King (JBA’s nom for M-o-M).  Both teams brought energy and JB responded with a penalty.  The tide then turned clearly CW’s way and three crossings of the line were ruled awry for one reason or another, one such “obstruction” call, this observer felt, being vocally deemed by a spectator from the end zone!  Finally, from a scrum, Gerhardt was not to be denied and it was 12 – 3.  It was The Queen again, smashing through some four or five tacklers and going some thirty meters for the 17 – 3 lead.

Short trip to the House of Windsor to take in the second half of the Women’s Prems. This one had been preceded by a victory to the Comox Kickers in the First Div game, didn’t get the score line but heard it was comprehensive!

The Premier match was really “all over” at the half with UBC leading 41 – 7. In the second stanza, Coach Dovanne came off the bench, showing she’s still “got it, scoring one and setting up Nielsen on another for a final 19 – 53 and 12 – 12, second half result. UBC is a very good side; well coached by Murtens, heaps of talent; training hard and playing to their strengths. It was noted by one observer that there was an obvious increase in size of a few of the ladies, compared to last season. A scholarshipped program has upped the talent level and time on skills and in the gym have paid off. One outcome so far this season is the fact that they are National University Champs. There remains no lack of enthusiasm on the sidelines with our CW crew, auguring well for the rest of the season and the future. In conclusion, for the home team, apart from the players mentioned, Okonkwo, Wiechnik, Goodwin-Sutton and Pedrick all deserve recognition.

The day’s rugby had all started at MacDonald Park where the Bays and Islanders had a fun joust, Bays winning five tries to two, although, heard tell, Coops posted two of the five! Somehow, The Don managed to provide some post-game pops and all was well with the rugby world. Have to mention that The Daumer somehow weaseled his way into a cameo for the Reserves – ‘onya, Daumer.

Thanks to all of the officials on the day, In-the-Middle and on the touch lines.