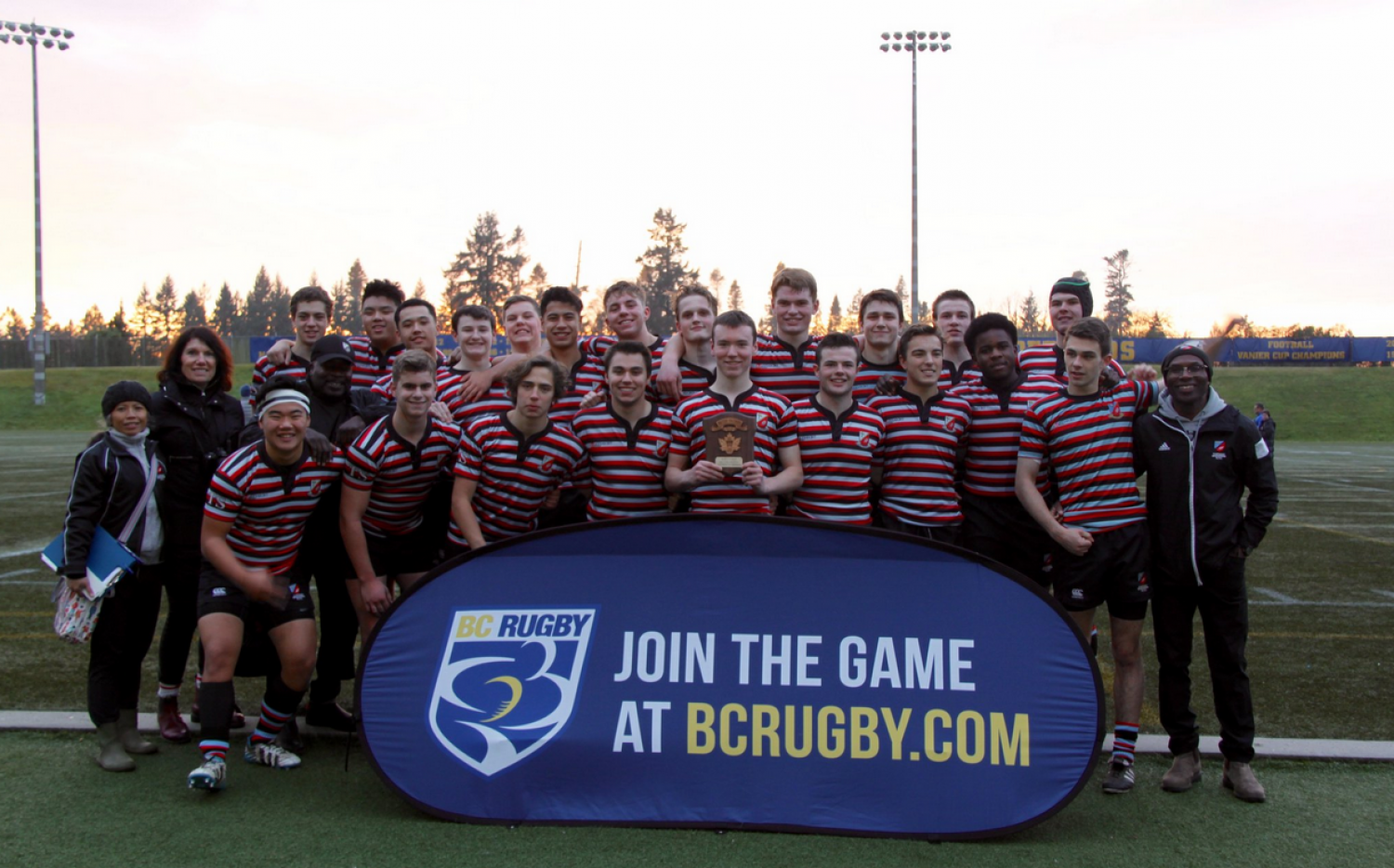 What a day for the 2016-17 version of CW U18 rugby. Stretched to the limit due to injuries and unavailability, the latest model off the CW conveyor belt travelled to Vancouver to challenge the Bayside Sharks in the grand finale. Despite a first half stagnated by an uncharacteristically high number of CW handling errors, the boys rallied in the second stanza to record a well-deserved win. With the legacy of CW junior programs borne out in the physical presence of members of the Carson clan, and the inspirational pre-game words of CW alum, Jeb Sinclair, still ringing in their ears the boys produced segments of polished play that will go down in the annuls of CW lore for years to come.

Five tries were scored, and while all were by forwards they were not all the result of strictly forward effort. The sweetest of the five was finished off by the player the boys have dubbed “Lazarus”, due to his miraculous recovery from a shoulder injury to put on a dominant display of aerial skills, tackling, deceptive running and most of all support play. Previously known as Conor Hills, “Lazy Russ” found himself at the end of a sweeping 50m play that featured a ridiculous offload from Zarija Djurickvic to touch down and put the result of the game beyond doubt. The field resembled a M.A.S.H. unit every time Nick Carson carried the ball, so you have to admire the bravery shown by Bayside throughout. Final score, CW 29, Bayside 5. What an end to an undefeated season! (11 – 0).

Talking with team Coaches Spencer and Roger after the game, they commented that thanks and recognition be given to team managers, Val Carson and Recel Fajardo-Jardine for keeping the team in sync all season; the CW Executive for their continued support; the parents for providing young men who value labour before rewards; and the players themselves for coming together from six different schools under the CW banner. To the grads: “Thanks for the memories”, and to those returning next season; let’s add some more to the CW junior rugby legacy.

Captain Carson accepts the trophy.
We follow this report with an editorial supplement. Almost 50 % of this team started playing rugby in the CW Mini program, back around 2009, give or take. Their progress is a credit to the program, its coaches, managers and support folk. So Spencer and Roger have coached another CW B.C. Age Grade Champ. When another banner is hoisted on CW walls, we always laud and honour our players. This epilogue is to honour the coaches who so devotedly have “given back” to their club. One really needs to watch a training session to see how expertly their charges are cajoled, praised and challenged to learn the gross and finer skills of the game. The self-deprecating Brothers Robinson would be the first to decry these plaudits, their personal humility serving as yet another fine example to our youth and the game. We note it was only ¾ seasons back when their counterparts also went through the season undefeated - not a factory but darn near! So, congratulations guys and thanks for “giving back”. Finally, we add the excellent support of parents, Val Carson specifically for the past eight years, also deserves recognition. Thanks to one and all.

Congratulations to a combined North Island Girls team, Winners in the U16 Finals over Abbotsford, 25 - 15; an amalgam of South Island Girls, from Westshore, JBAA and CW, winners of the Girls U18 title, defeating Abbotsford, 32 - 17.  Further, to Cowichan RFC, winners of the Boys U16 title.  A good showing from the Island, often considered a minor player at the senior level, for this development and success with age grade rugby.