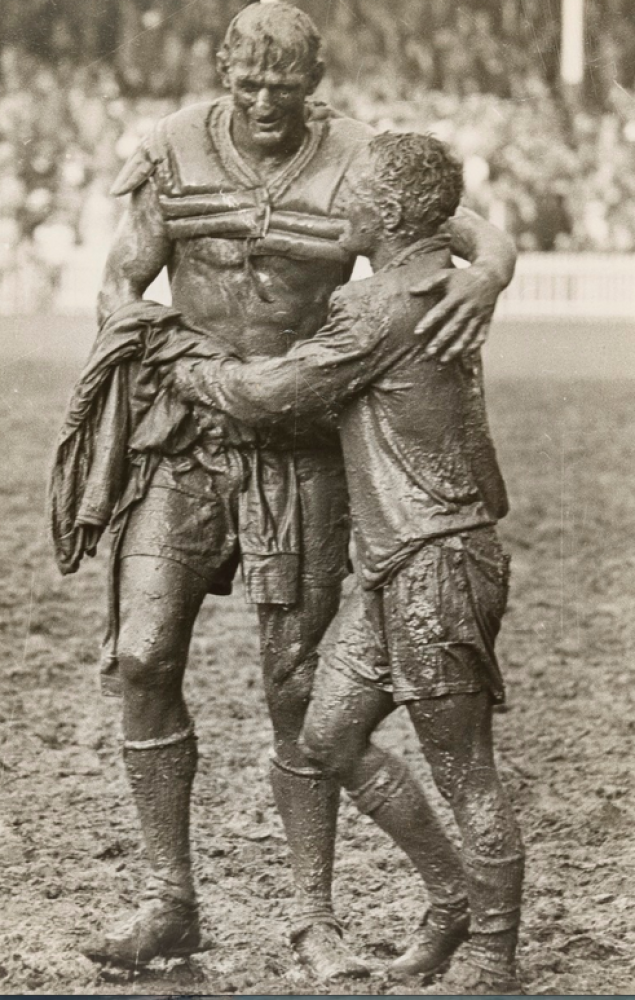 Came across the recent passing of “Stumpy”, Arthur Summons the other day at age 84.  The wee man was a fabulous player and developed a lengthy collection of achievements.  He started his football career, playing rugby and was selected to the Wallabies Vs Springboks at age 21.  Summons soon found that his time taken up preparing for the game was better rewarded by switching to the League code.  In 1961 he was selected as a Kangaroo to Tour N.Z.  In 1963 his meteoric rise saw him selected as Player-Coach of the Kangaroos for a memorable victory on English soil, the first in some fifty odd years.  Summons was injured and so focussed on the sole role as coach, a capacity he held for a couple seasons.  The above photo is a memorable and it became a sculpture for the League Championship Trophy, a tribute to both men and their achievements to last far, far longer than their lives. It is aptly entitled; “The Gladiators”.

To finish with a short Arthur Summons story.  When he switched to League, he was accused by his club and National team hooker, Noel ‘Ned’ Kelly who was losing scrums to a rival as being; “the worst f_____ing halfback I’ve ever played with!”  Summons, still wedded to rugby union’s greater respect for the rules, was not feeding the ball sufficiently in the direction of Kelly’s striking foot!  Of course today RL scrums are not even competitive.


If you have a rugby story to share, please e-mail; Editor.

And to the reader who enquired if it was Murray Allen who was a.n.other “Face in the Crowd”?  The answer is “yes”.

And to our faithful “regular” from NZ, Doug, who responded with the simplicity of rugby to come, being simply “Touch”, I am not sure that was the game “Sir Ian” had for his team.  Let’s extend the fact that a “tackle” could be a “two-handed touch below the waist” and see where creative minds may go.  The “touch” is ever so brief and not totally complying to socially distancing but given time…..

And oops, we had it wrong.  CW has been informed that it is NOT Chris Snape to the left of Bruce Grey in the Guess That Team Picture.  Any stabs??

“The advantage law is the best law in rugby because it lets you ignore all the others for the good of the game!”  Derek Robinson. (Author of “A Player’s Guide to the Laws”.)     Thus endeth the “Ruck & Maul”!