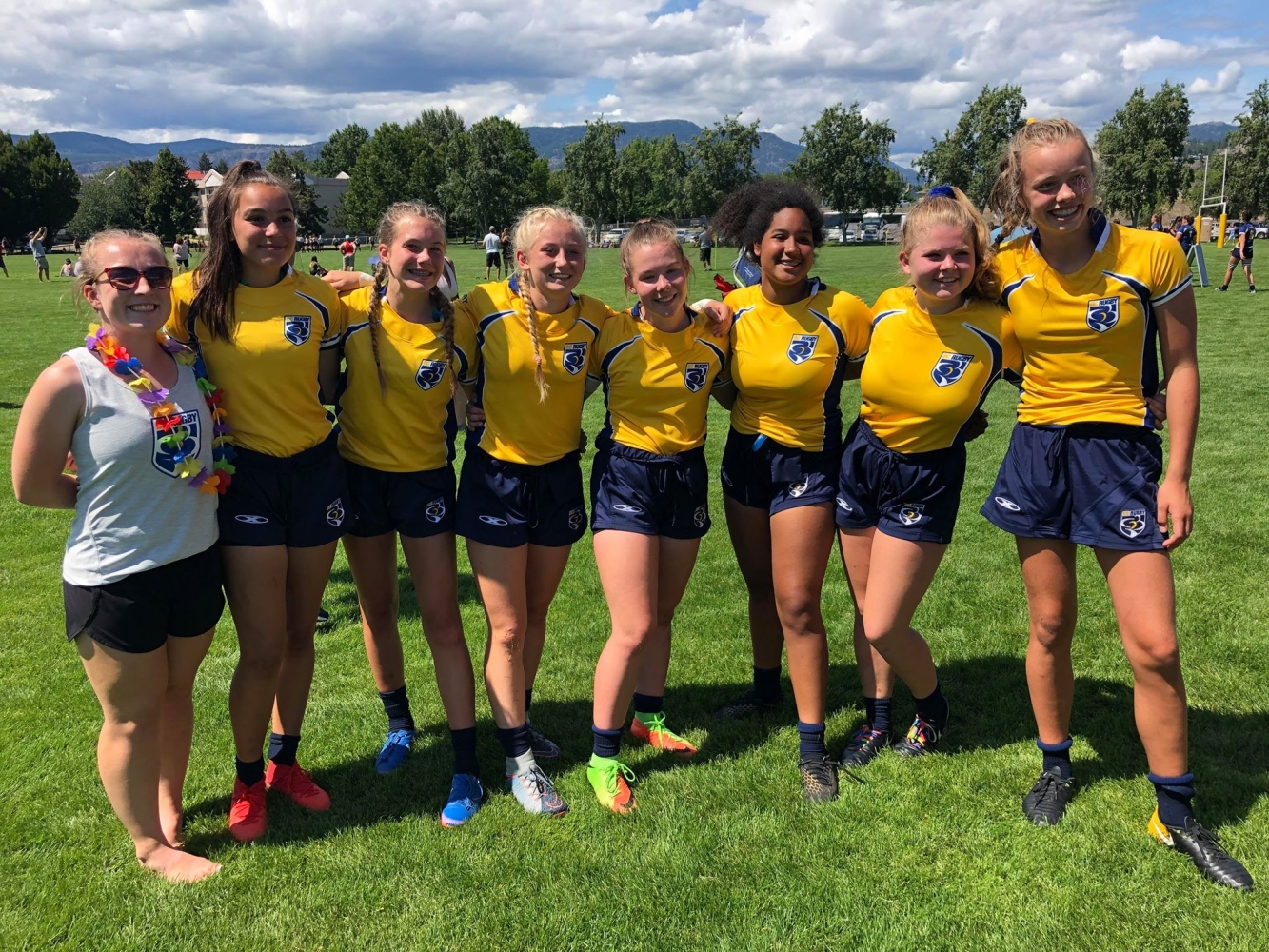 So far, a lovely summer hiatus for the Ruggernut, however, news is coming in and it’s back to the keyboard. The most recent news about club registration has been fruitful, so we ask you to spread the word to returnees and newly interested players.

Our Age Grade girls and Boys have certainly been busy bringing credit to B.C. and our club. Pictured above are members of the B.C. Girls U15 team which finished in 2nd place in the recent Western Canada Championships for U16’s! Jorga Cook, Gwynnie Fry, Jesse Knaggs, Anna Palmer, Marley Robinson, Karlyn Schurman and Jorga Tye. CW’s Lauren Sargent was the Head Coach. Jesse seems to be following in her dad’s footsteps. CW has a fun group of ‘Dads with Daughters’ and we see a resemblance below, Knaggs Crew of Two!

Jesse and Eddie in fine form!

The B.C. Boys U15’s also played in the U16 Championships and finished in 3nd place.  Marshall Stove was on this team.  The Boys U16’s ‘Blue’ finished in 2nd place, behind BC ‘Gold’.  Luka Djurickovic, Alexander Mc Callum and Liam Poulton were members of this team.  BC U19 Men also had success in defeating Alberta in a pair of games and CW’s Henry Down was a key member of this team.  This weekend the Western Canada U18 Boys and Girls Championships were hosted in Saskatoon. B.C. once again, fielded teams at the U17 level in this competition.  At time of upload, we don’t have the results.  CW’s Chloe Hill-Huse and Renee Cook were on the Girls U17 team and Katie Elsner, Maelle Reed and Sophie Tafel were with the U18’s, whilst Toby Wu played with the Boys U17’s.  A tip of The Ruggernut’s cap to all of these players, coaches and parents.

With THE BIGS, we have seen consecutive defeats of our National Senior Men’s Team.  The first of which was a very mediocre performance against a well-organised U.S. team.  The American’s defensive line stifled any kind of penetration and Canada was without creativity to beat it.  This past weekend we witnessed another inept performance in this writer’s opinion and although I appreciate the fact that the Coach may have seen many positive improvements and the opposition was arguably a stronger team than the Americans, the strategy and poor skills were rather glaring.  Looking at the opposition, Canada simply does not have an equal physical presence – bottom line.  Just where we may recruit such specimens in the immediate future is an unanswerable question.  So, it’s on to Tonga next weekend and if the words of the Captain and Coach are to be believed, the long-suffering Canadian fans might even go out on a limb and expect a victory.  We won’t lay down our money methinks.  Having opined thusly, in fact, in “test” matches, all-time, Canada has NOT lost to Tonga, dating back to RWC 1987, 37 – 4!  There are still some glaring vacancies with Italy a mere seven weeks away.  Hopefully, a stronger combination and a good week’s work will pay off.  Kudos to TSN for televising these matches.


Men’s B.C. Bears.  The Bears, with CW Skipper, Nath Stewart at #8 managed to come back in a two-game total point effort last weekend to win the Best of the West after a 32 line deficit, when they defeated the Prairie Wolfpack, 54 – 12.  ‘onya, Bears!  Better yet – to Capilanos, National Women’s Club Champs.  CW offers heartiest congratulations.  This is a ‘first, following the Men’s Club Champs last year, it appears that RC is going to alternate this event.  There will be some CW women stewing in their brew, bemoaning the fact that they bested the Caps twice during this past season!!  A National Championship in the future??  Heady stuff but not without the realm of possibility.

Still with THE BIGS – a gold medal to Canada’s NSWT Sevens team at the Pan Ams and silver to the gents with Caroline Crossley, Luke McCloskey, Brennig Prevost, Pat Kay and Josiah Morra being players who have sported The Tricolor.

Closer to home, the passing of John Money was noted this past week.

Money was a true character whether on or off the field, in academia or with his social acquaintances. This writer draws on some delightful memories.  Playing against Castaway Baby Blues with Money and Gallagher rampaging in the front row, usually resulted in some form of physical aftermath.  This pair were ably followed by Stobart and Baylis. Now there’s a trio in the heavenly match! Then there was Money, yelling profanities in a bellowing voice at players and officials alike, from the balcony, vehemently defending a CW team that I believe he grew to love, despite being a Castaway at heart. A third memory is of John, peddling like a demonic banshee across the paths at UVic on a "gearless" push bike with his ever-present "satchel" as the Professor Emeritus rushed to his next group of students.  Only Money, a one of a kind, would be remembered for his 1971 article; “Taverns, Coffee Houses and Clubs: Local Politics and Popular Articulacy in the Birmingham Area in the Age of the American Revolution.”  A tough competitor, a brilliant educator and a great man, RIP John Money.