Some Days Are Diamonds..... 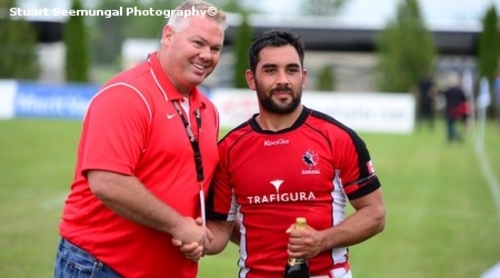 Some days are stones but yesterday was a four diamond day for Rugby Canada’s Men’s Program.  The Men’s U20 team scored a solid; four try victory over Uruguay, 36 – 15.  This put them at the head of Pool A and they now play Italy on Sunday to see who gets promoted back to the World Tier One level.  Coach Shelley was able to rest some key players for the upcoming Final and yet certain efforts are very worthy of mention.  He rates the work of prop; D’Justice Sears-Duru as being outstanding and Shane O’Leary at #10, and yesterday’s Captain, Connor McCann also valuable contributors.  CW’s, Lucas Hammond played on the wing, from #9 and Peter Van Buren came on as a replacement.  This team appears to be on a mission and we congratulate them on their achievements to date and wish them the best of luck for Sunday.

In the NSMT's game, as predicted, Fiji brought some very BIG units to the fray.  Despite this, it was Canada that had the advantage in the early going and was first on the board after good breaks from Mack and Underwood.  Captain Carpenter dove over from a goal-line ruck.  Fiji responded with a dominating run from their huge center, brushing aside five “would-be” tacklers.  The try could have been labeled “soft” after the very committed defense that had preceded it and it was a wonder this human battering ram was not used more often by the visitors, not to denigrate a more committed defense as the game progressed.  CW’s, Yak Dala was prominent with a high work rate and brave defense.  Penalties were exchanged and Fiji went to the shed with an 11 – 10 lead.  The first half saw Fiji being treated rather liberally at the breakdown in terms of their entry and also Canada’s set scrum was shunted backwards on occasions.

Sinclair came on for Carpenter and the mongrel he brought was noticeable very early.  The stanza was a mere minutes old when Underwood, on debut, got the ball to Jones who was tackled but slipped to Evans who grubbered.  Jones won the chase for the ball from a “marginal” position and Canada went up 15 – 11, not to be bested again.  Fiji, on the attack, lost the ball about ten meters from Canada’s line and Mack fed Paris who scooted some ninety meters, only to lose the ball over the line in a desperate tackle.  This was most “un-Paris” like.  About thirteen minutes in Buydens and Barkwill came on and the scrummage stiffened, even pinching one against the head.  Marshall was next to cause concern for Fiji when he blocked a clearing kick, only for the ball to be knocked on.  Marshall was having his best ever outing in the Maple Leaf jersey. Hearn, in the centers, repelled a number of attacks from big men.  At the “quarter mark”, MoM Mack broke downfield after an “all world” dummy.  He sprinted sixty meters but was caught, ten meters shy.  A quick ball went to Underwood, on to Hearn who provided space for Barkwill with a clever pass for him to dive over exulted, for the try.  Canada continued to have the edge when Braid broke a tackle and chipped and chased, only to be thwarted close to the line. With a quarter remaining, Dala was replaced by Moonlight who brought energy and Ardron was playing like a man inspired.

Then something awoke fire in Fiji, fans had expected this to occur much earlier.  Perhaps the fire had been doused with blanket defense.  One could sense a score being imminent despite Canada running strongly.  Finally with about four minutes remaining, Canada succumbed to some good pick and drives and hard running by big men and Fiji’s Captain, #8 Qera, dove over.  White replaced Mack and the outcome was not in doubt when he “booted it to buggery” to signal full time.

There were plenty of positives for Canada.  Physiologists talk about the need for recovery time in modern rugby and this will be truly put to the test when the team has to turn around and take on another probable bunch of mammoth men from Tonga this Saturday at 2:00 p.m.  The positives will have the selection committee having to do their best work – a nice state of affairs and often a rarity for Canadian rugby.  Today, the FRF were good value, with Marshall outstanding and Sinclair, Dala and Ardron the pick of the rest of the pack.  #9/10 combo was a flashback to Fairhurst and Monro in good form, with Mack (pictured), as MoM.  Hearn had one of his  his best outings in XV’s, whilst the rest of the backs played to a pattern and tackled reliably, with the exception of the noted try.  In all, a GREAT DAY for THE MEN IN RED.  Go, Canada, go!