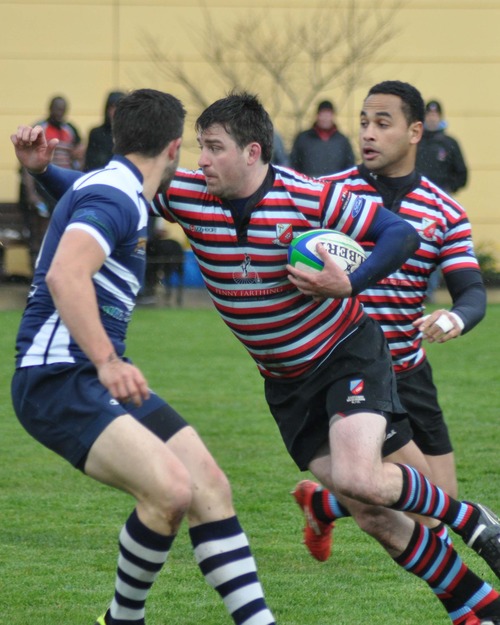 An absolutely beautiful day with warm sunshine, blue sky and a clear view of the snow capped Northshore mountains. Warm? For the big men who toiled hard for 80 minutes, it was a blast of heat that felt like mid summer – 22 degrees with a cross field wind that made it very difficult for kickers. Surprising for a big city and the only premier rugby game in town that, but for the Burnaby Lake faithful, it was a very sparse crowd.

So now all the pre game jockeying and Kasparovian chess moves were history and it was up to the thirty men on the pitch to determine the outcome. The field was in excellent shape; the tape and trainer magic had been applied to the niggling season end injuries and it was game on.

From the opening kickoff CW had all kinds of difficulty getting out of their half. Tenacious defending, a windblown missed Burnaby Lake goal kick and errant CW passes were the mark of the first fifteen minutes of play – all of it in the CW forty. The first breakout from our half at minute 16 saw the ball run swiftly up field capped by a rolling maul to go over the line. CW 5 – BLRC 0. Convert good on a tough angle courtesy Llyr Morris. CW 7 – BLRC 0. Well, perhaps this was the momentum shift CW was looking for. The ensuing kickoff was well taken by the rugged and one winged Daumer but with little organized support, the well produced ball was pounced on by Burnaby who would have scored but for a forward pass.  From this point to the end of the half, we seemed to be defending for large tracts of the game. On the few occasions that CW had possession, errant or dropped passes seemed to snuff out prolonged forward moving possession. By half time, BL had scooted one wide try and mauled another – neither converted while the last play of the half looked to be a clear breakaway to a tally for Mozak but the pass did not reach the hands. Score CW 7 – BL 10. Start of second half, an error led to another BL unconverted try followed shortly thereafter by a good penalty kick by Llyr Morris. CW 10 – BL 15. The heat seemed to be taking its toll on the team doing the majority of the defending – CW and the penalty count grew in BL favour to give them 2 more well struck kicks and a later unconverted try. The game ended CW 10 – BL 26. The stronger team had won on the day but one cannot help wondering what might have been if we had played every chess move just a bit better….. Huge credit to a squad that, not many months ago was looking at finishing far out of the playoffs and perhaps worse. This was a heroic finish – the lads deported themselves extremely well.