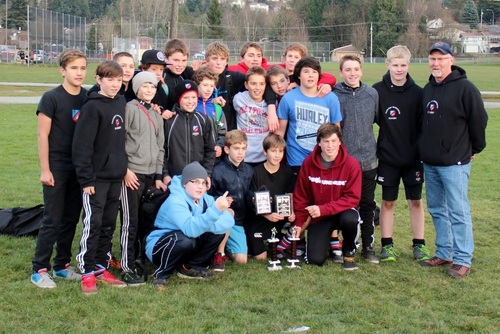 CW U14s are at it again! The U14s made their first 'overseas trip' last Sunday and came back victorious! The team was re-organized into two sevens teams to compete in the U-14 and U-13 final seven-a-side tournament of the Fall season last Sunday in Abbotsford. The tournament included a mix of teams from both Vancouver Island, the Lower Mainland, and the Fraser Valley. Teams involved; U14 - Bayside Sharks; Capilano X2; Vancouver Rowing Club; Abbotsford, Velox, Nanaimo, CW.  U13 - Capilano X2; Meralomas X2; Cowichand and CW.

Splitting the CW team into U-13 and U-14 made for some well contested 7's play. These young men and their great coaches showed the mainland teams that they are a force to be reckoned with as they dominated the field in both the U-13 and U-14 sevens play and took BOTH 1st place trophies from this tournament while maintaining the CW reputation for good conduct and sportsmanship.

Congratulations to the team and coaches, thanks to the tournament organizers & referees, and thanks to the dedicated CW fans who made the 'overseas trip'.