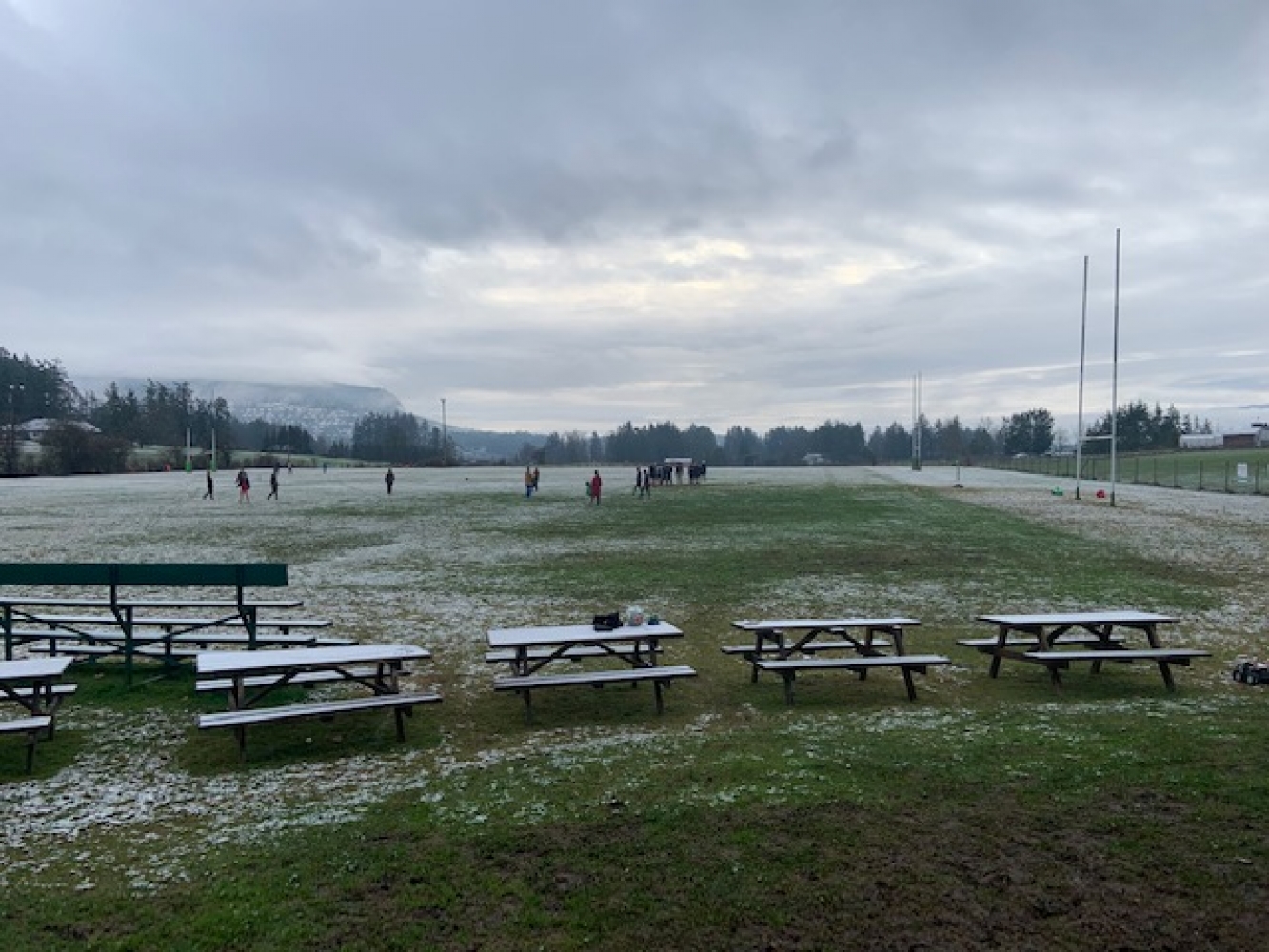 TWO CUP GAMES DECIDED IN COWICHAN
Winter weather conditions were evident as players wended their way north, one group of players and supporters being delayed by a four-vehicle accident at the summit!  Regardless, the show went on.

A very young and inexperienced group of Tricolor Women was excited about testing themselves against the Home team for the right to claim the inaugural Xi’ Sul Stomish Cup.  The first half of the season has been focussed on developmental and exhibition play by the Island’s four clubs.  CW has settled with an experienced coaching group led by Catie McNally and including Albert Michau and Julia Folk.  The club has a broad registration base of over forty players.

The Cowichan ladies had a powerful opening in the match with their full back being prominent.  By the interval they had run in three tries and built a 19 – 5 lead.  Not to be daunted, the Visitors began to claw their way back in what became an intriguing tussle.  Eventually, the teams became tied at 19 – 19 with time expiring. When Cowichan scored the go-ahead try it appeared that was “all she wrote”!  Miracle of miracles, CW managed the equalizer with no “ticks” remaining.  Lucy Beauchemin was mobbed by emotional teammates when she converted for a 26 – 24 “steal”.  Players of the Match – Forwards - Chloe Hill-Huse and Backs - Lucy Beauchemin.

The Sideline Sage reported “a thriller” and character was added to by the comeback.  The hard work and sacrifices of the Fall season will provide a solid base for Premier play in the New Year, when clubs such as UBC, Westshore, Caps and this same, Cowichan club, really ramp it up.  The club is planning on fielding both Premier and First Division teams.

FOOTNOTE. Ed.  Much credit must be given to Team Manager, Chris Shepherd, who is solely managing the masses.  Assistance would be appreciated – spread the word.  So it is, well done and congratulations, ladies.  ‘onyas


In the Men’s match, featuring these two storied clubs, the Home team, Piggies, showed early evidence of doing their homework from their previous encounter with CW.  An early stranglehold on field position, saw them post first points and in fact, their total scoring was to become “book-ended” with penalty goals.  CW responded with a Jace Peters try, offering hopes for more to come.  However, with a deficit of possession and field position and typical, hard ‘Valley Defense’, it was the locals who gained the lead, 10 – 7, after #15 had inserted in the line and scored the tally. This lead they carried to the interval.


Cowichan deservedly kept their nose in front after the teams exchanged penalties and the game, not being without passion as the players strived to gain the upper hand. The field conditions became rather “sloggish”, keeping the teams close in score and in close physical proximity as they sought ascendancy.  A number of yellow cards were handed out to the miscreants.  In the late-going, CW tied the match at 13 – 13 and despite what had been a seemingly, uninspired display, the First Div Men and Women supporters for the Divvies, gleaned a hint of possibility.  It was not to be, as a very skilled Cowichan goal-kicker, added yet another penalty for the 16 – 13 win.  A victory which provided much joy for the locals.


The Sideline Sage reports, “a deserving win with the local key players stepping up, keeping on the pressure and CW unable to extricate themselves, not something observers of this group had been accustomed to – full value to Cowichan”.  Congratulations to the Piggies and for CW, plenty to learn from this one.  All four teams warmed up in the clubhouse, recipients of the customary Cowichan hospitality.


For CW, the contests cease but the training doesn’t!  We wish all our followers a “Merry Christmas”.  Stay tuned to www.cwrugby.com for we will find a rugby story somewhere or another!